Amazon-owned video game streaming site Twitch announced this morning that it will now sell games directly on its platform – a not entirely surprising expansion for the service where developers are already taking advantage of the site’s social community to get the word out about their games, and engage fans. Games will go on sale this spring, says Twitch, but did not give an exact launch date.

The games will be made available for download and playing through the Twitch launcher, software that currently helps Twitch Prime customers redeem their games and loot codes. Twitch Prime, Twitch’s own version of Amazon Prime, likely signaled this inevitable move to sell games, given that it offered various benefits which included discounts on new release titles and free release-day delivery on games. It only makes sense to make purchasing games a more regular part of the Twitch experience. 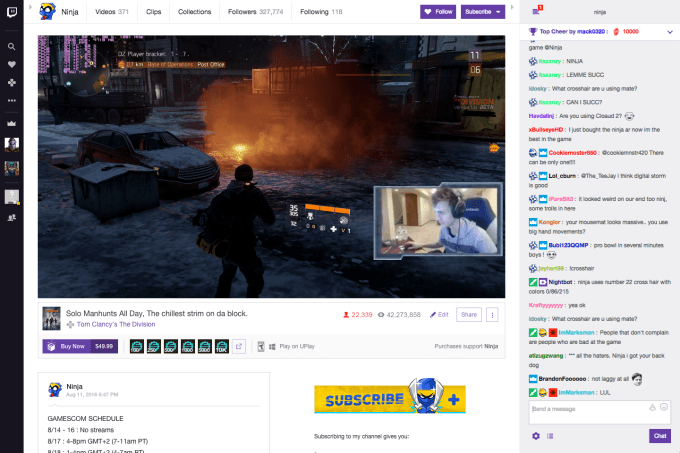 In addition to the Twitch launcher, gamers can also choose to download and play the games through existing developer and publisher-operated services, including Uplay. The move will put Twitch up against other game marketplaces like Steam and Valve.

Games can be promoted on the site beneath the live streams, where a bright, Twitch purple-colored “Buy Now” button will appear along with the game’s price. The games can also appear on channel pages. Developers will earn 70 percent of the revenue, while Twitch partner streamers will earn a 5 percent commission on sales from their channel pages.

To sweeten the deal, Twitch says it will also reward buyers by offering them a free Twitch Crate, which includes a random selection of items like exclusive emotes, chat badges and Bits for Cheering – typically things that cost gamers money.

“For years we have appreciated how supportive Twitch streamers and viewers have been of our games,” said Chris Early, VP of Digital Publishing at Ubisoft, in a statement. “This made it an easy decision to work with Twitch to better serve our passionate community with benefits for everyone.”

While selling games makes Twitch an e-commerce player in the gaming market, the way sales are integrated into the site seem to be more about enhancing the overall community. Instead of an online marketplace of titles, game sales offer another way for streamers to generate income, and encourage greater developer participation.

Twitch’s game sales will initially launch worldwide in English this spring, with pricing in U.S. dollars. It will later introduce localized experiences later in the year.