Twitch’s push to broaden the scope of its video game streaming site to include more types of content continues today with the launch of a new section on its site called “Communities.” Designed to cater to users’ unique interests, this section initially contains hundreds of categories, some of which build on top of gamers’ interests as well as those that don’t. Here, you’ll find dedicated sections devoted to topics like cosplay, drawing, painting, comedy, food, music and more. Plus, Twitch says users can set up their own communities, if they choose.

Of course, many communities will also focus on specific gaming titles, types of gaming, like retro, or activities, like speedrunning.

The launch follows a number of changes to the Amazon-owned streaming site over the last year or so, which have put an emphasis on catering to the gaming audience in new ways, while also attracting new users. In fall 2015, the company debuted a new channel called Twitch Creative, which allowed gamers to show off their artistic endeavours – that is, their game-inspired paintings, drawing, songs, costumes and more.

It also dipped its toe into TV streaming, by offering classic programs like those from Bob Ross and Julia Child, as well as Amazon’s new TV show pilots. It even launched a “social eating” category to cater to its South Korean users, then more broadly opened up to vloggers through a new category called “IRL.” 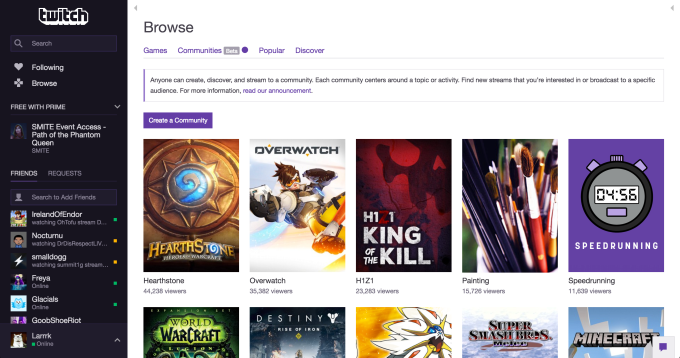 Given the expanded scope of content on the site today, it’s not surprising that Twitch would now try to organize these many different communities to make them easier to find.

But the change is not just about enabling better discovery, users are also allowed to start their own communities, which are then added to the directory listing.

“We’ve heard from our streamers and viewers that they want the freedom to form specific groups, organizing around topics such as speedrunning, esports, cosplay, and painting,” said Sheila Raju, Product Marketing Manager at Twitch, in a statement. “With Communities, we are giving our users the power to create groups of their choosing, while providing creators with another tool to expand their audiences. If you have an interest that’s shared among others, Communities is where that collective can live.” 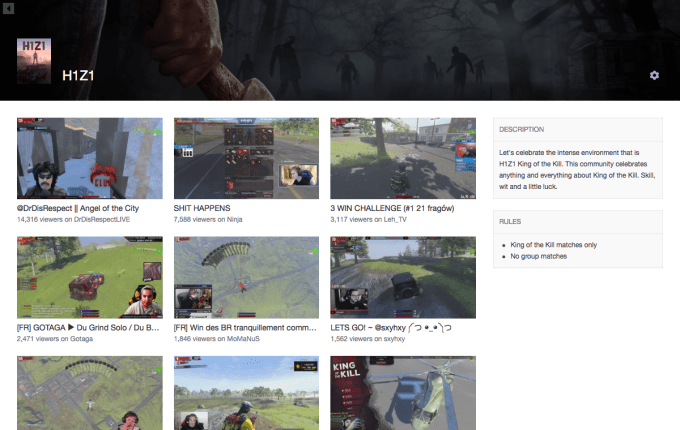 These communities can be personalized by their creator, each with their own specific rules, a customizable banner and avatar, and they can have their own designated Community Leader. The leaders will also have access to moderation tools for the channels in their communities, which gives them permission to ban or timeout channels that go against their community’s rules.

Inside the communities, there’s also a “stream wall” which displays the live content from creators who are choosing to broadcast to the community. For broadcasters, associating themselves with a community could give them more exposure for their content, allowing them to pick up more fans.

The communities are all public, too, which means that viewers and creators alike can see the list of channels that are currently broadcasting at any time. This helps them to figure out if the community is right for them.

The new Communities directory is available today, in beta, to all Twitch viewers and broadcasters.