The changes are one of many Twitter has rolled out in the past few weeks. Earlier this month, it said would stop the creation of new, abusive accounts, offer safer search results, and collapse low-quality and abusive tweets from being shown. And more recently, the company began putting online bullies in “time-out,” when its algorithms identified tweets that appeared to be harassing – like those that use certain language or seem to be attacking another account that doesn’t follow the poster in return.

This time-out feature was previously reported, but what Twitter is announcing today is an expansion of that. The company is now doing a lot more using its own technology to identify abusers’ accounts and take action. In other words, Twitter isn’t just mindlessly flagging accounts that tweet a single rude word or phrase, but is more closely examining the behavior itself and the context.

The company doesn’t detail what, specifically, it’s doing on this front, as it doesn’t want abusers to understand how its systems work.

But it does say it’s focusing on accounts on penalizing and banning accounts that violate its “Twitter Rules.” These guidelines prohibit, among other things, direct and indirect violent threats, targeted abuse and harassment, hateful conduct, doxxing (publishing private and confidential personal info), impersonation, self-harm, and the use of multiple accounts to engage in abuse.

These are all areas where Twitter has largely failed to act promptly in the past, having allowing frightening levels of online bullying to take place, as with the misogynistic, and ongoing threats from Gamergate supporters against the women who spoke out about issues of sexism in video gaming culture; tweets to Robin Williams’ daughter after the actor’s suicide, which included photoshopped images of his body; or racist tweets to actress Leslie Jones of SNL and Ghostbusters fame, as just a handful of examples.

More recently, Twitter has seen increased numbers of neo-Nazi accounts, and even accidentally ran a neo-Nazi ad hours after it announced other steps it was taking to limit abuse. The company has also suspended a number of white nationalist’s accounts, as well as notorious troll Milo Yiannopoulos.

Those getting banned complain that Twitter is denying them free speech, but Twitter’s Rules seem to indicate that when speech promotes hate and harassment, there are repercussions. Like in the real world, you still have the right to say things or discuss your beliefs, but your words may have consequences. (Such as getting fired from your job.)

“We aim to only act on accounts when we’re confident, based on our algorithms, that their behavior is abusive,” says Twitter of its updated algorithms, in a blog post. “Since these tools are new we will sometimes make mistakes, but know that we are actively working to improve and iterate on them everyday,” its blog post explains.

Twitter tells us that accounts that violate its Twitter Rules will be removed if they continue to violate its rules, but declined to share how many users it has permanently banned to date.

To make sure abusers don’t return, the company is using information users share when they sign up to connect the dots between banned and new accounts. This includes things like email, phone, and IP address, for example.

In addition, the company today is rolling out expanded filtering tools that will let you filter your notifications to hide those which may be from abusers, like the ones without a profile photo (Twitter eggs), those without email addresses or phone numbers.

This step is useful to a point, but is more akin to sweeping the dirt under the rug. It’s still there on the network, and now potential victims are less informed of the threats against them – which can be dangerous in its own way. 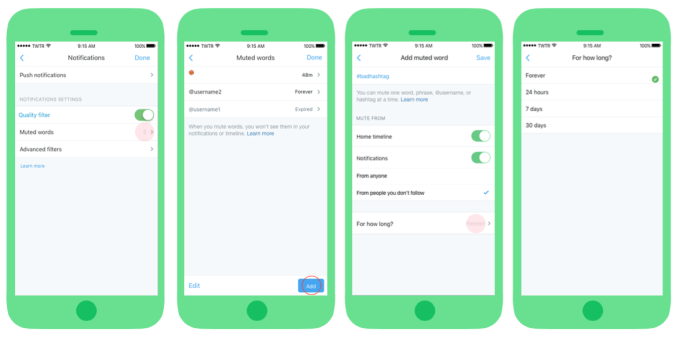 The Mute feature is getting an upgrade, too. Before, the option let you remove certain keywords, phrases, and conversations from your notifications. Now you can mute from your timeline, and decide how long the content is silenced. The options are one day, one week, one month, or indefinitely.

Finally, reporting abusive accounts is no longer like sending your complaint into a black hole. Now, similar to other networks like Facebook, you’ll be updated on the status of your report and what, if any, actions were taken.

Twitter says users will start to “hear more” about the accounts or tweets you’ve reported, including both when you report harassment directed at you or when you’re reporting harassment focused on another account. Twitter will alert you when it receives your report and when it takes action. These alerts will display in your notifications tab in the app.

It didn’t say how long it would take to process your reports, however.

All the changes are rolling out now to Twitter, though some had previously been made available ahead of today’s announcement.