Twitter is putting online bullies in “time out.” As one of the company’s many new anti-abuse measures, users whose accounts have been identified engaging in abusive behavior will have the reach of their tweets temporarily restricted. During this time, the abuser’s tweets will only be shown to their followers, Twitter says.

The change was spotted by BuzzFeed and others, following a series of tweets from those being impacted by the new policy. Those whose accounts were flagged posted screenshots of the emails they received from Twitter, which all included the same language.

These emails began by explaining that “creating a safer environment for people to freely express themselves is critical to the Twitter community,” then said why the users were being restricted and for how long.

Of course, a “safer environment” has not always been a focus for the company. Twitter failed miserably over the years to protect its user base from the harassment and bullying that comes hand-in-hand with a network where anonymity is provided, and abuse goes unpunished. There has been nothing to prevent an individual from continually re-creating accounts after being banned, or even setting up multiple accounts in order to harass others.

While Twitter had rolled out various anti-abuse features over the years, the company had generally focused on things like being able to block and report accounts, or putting together a “safety council” to discuss the matter.

But in recent days, Twitter has begun to act as if it would take the problem more seriously.

Earlier this month the company announced it would make a number of changes to silence online abuse, including putting a stop to the creation of new, abusive accounts, offering safer search results, and collapsing abusive or low-quality tweets.

This new “time out” is most similar to the latter action item, which would see Twitter hiding tweets that were unhelpful or offensive from conversation threads. But instead of just hiding abusive tweets (with an option to click to see them if you wanted), Twitter is also now actively stopping abusers from being able to spread their content more publicly.

Twitter had implied it would roll out more anti-abuse measures to coincide with those it unveiled at the beginning of the month, but this particular “time out” feature was not formally announced.

The company also hasn’t officially explained how it’s determining which accounts need to be silenced in this fashion, but we understand the company is using a combination of factors, including both the account’s behavior and the context of that behavior.

For example, if an account was constantly tweeting abusive language at another account that didn’t follow them, that would be a clear indication that it was engaged in online bullying.

Those who have been flagged seem baffled that their free speech now has consequences.

Others impacted are suggesting it’s time to leave Twitter’s public square and go hide out in a different corner of the web instead. That is, they’re instructing others to join Gab, the network Breitbart called a “free speech alternative to Twitter.”

When you get put in Twitter time out, take that time to sign up for https://t.co/3wBTfJOR2d where you contol what you see. https://t.co/tg9xzacOjU

This is a familiar response to perceived censorship – aka community safeguards – on online platforms. For example, Voat popped up a couple of years ago, offering a haven for those fleeing Reddit bans and anti-harassment policies, making much of the same promises that Gab does today.

But even when a community kicks out the bad actors, it doesn’t always spell doom. Voat never even neared Reddit’s numbers, as it turned out: 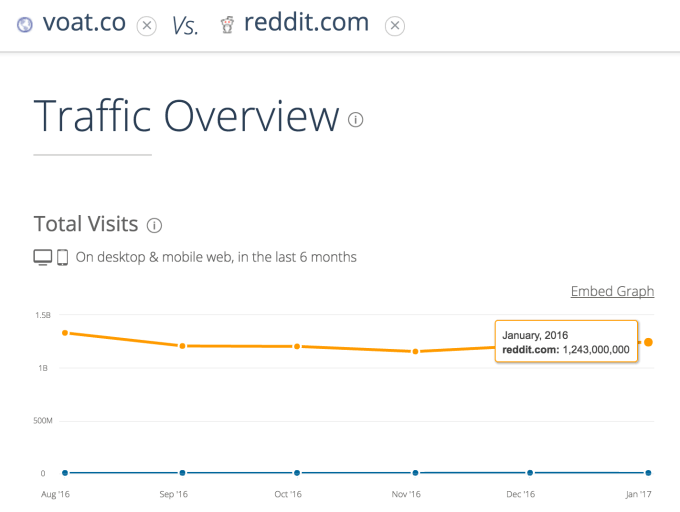 For Twitter, making its network safer could even bring in new users, given that many have held off because of the network’s reputation as a home for online abuse.