As we reported in September, iTunes has today launched a new section called “Spoken Editions,” which will feature narrated content from a number of online publishers in the form of audio-only podcasts. These Spoken Editions are available both in the iTunes storefront, as well as in Apple’s Podcasts app, for easy access.

We first spotted the Spoken Editions in the wild, during testing. At the time, a handful of publishers appeared to be trying out the new format. But with today’s official launch, there are now over 40 Spoken Editions available from a number of publishers, including the Huffington Post, Reuters, Slate. .Mic, Wired, IGN, Bustle, Fusion, Gizmodo, Jezebel, Lifehacker, TIME, Skift, Playboy, and others, including TechCrunch. 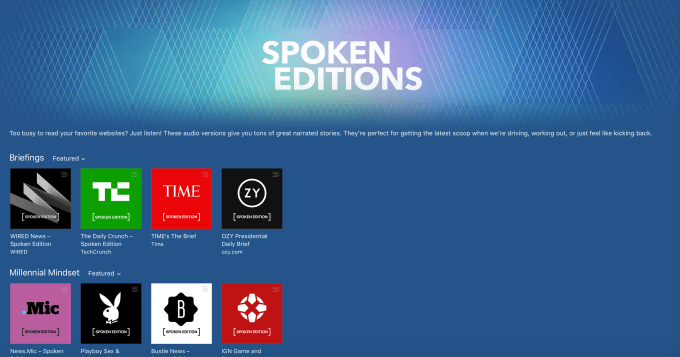 The podcasts are powered by SpokenLayer, a company that has developed a service that quickly turns a publishers’ RSS feed of articles into audio recordings that can be distributed anywhere – in iTunes, on SoundCloud, on the web, or any other audio platform. The idea is not only to allow consumers to “hear” from their favorite websites instead of reading them, but also to give each publisher’s brand its own distinctive voice.

“We have a distributed network of voice-over talent that is tagged and managed,” SpokenLayer CEO Will Mayo, previously explained to TechCrunch. “The voice and style of any brand is in its writers and the reporting it does. That’s unique for every publication, and that uniqueness is honored,” he said.

In other words, a brand whose target demographic was a younger audience may be voiced by a younger voice actor, for example.

In addition to giving consumers a new way to digest the news, SpokenLayer also opens up an additional ad-based revenue stream for publishers, thanks to the included audio ads.

The move comes at a time when podcasts are growing in popularity, as is voice computing in general. Amazon recently made similar, short-form audio recordings from publishers available to Prime subscribers for free, through its Audible Channels platform.

Meanwhile, many consumers are asking their connected speakers, like Amazon Echo or Amazon Dot, for news from their own favorite publishers by way of add-on apps for the Amazon’s Alexa voice platform. With Apple now aggregating and organizing a sizable group of audio news recordings, some may believe that lends more credence to the rumors about Apple building an Alexa/Echo competitor.

SpokenLayer says that, going forward, it will produce hundreds of episodes per week for these Spoken Editions, which will make it one of the largest podcast producers in the world.

You can view the new recordings here at http://itunes.com/SpokenEditions.