Parviz Parvizi Contributor
Parviz Parvizi is a co-founder of Clammr, a social audio discovery app and platform that features 24-second audio highlights and previews.
More posts by this contributor

Podcasting is having a celebrity moment: Serial’s Sarah Koenig has appeared on The Colbert Report; Arnold Schwarzenegger has been on the Tim Ferriss show; and, most recently, Barack Obama visited Marc Maron’s garage to appear on his WTF podcast.

Beneath the headlines, however, we see conflicting stats that lead us to ask whether podcasting is truly taking off or just getting more popular with existing diehard users. Measured by Google searches and episode downloads, podcasting has seen 30+% annual growth in recent years. On the other hand, only 17% of the population listens to podcasts each month. In fact, the growth rate of podcast listenership has dropped by half in the past two years. 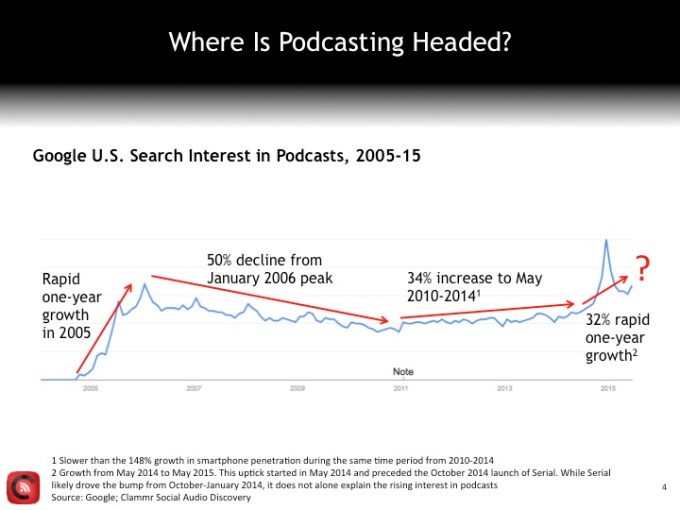 We set out to develop a view on the future of podcasting. Understanding where podcasting is headed is important to us because we have been building, and recently released, a social audio discovery app called Clammr. Podcasting also has significant implications for the $65 billion global audio sector that includes broadcast radio, recorded music, and on-demand streaming services. Until now, broadcast has dominated and on-demand audio has been a small piece of the pie, limited mostly to music streaming. If podcasting transitions to mass adoption, it can usher in a broader shift from broadcast to on-demand audio that could put much of the $65 billion audio sector up for grabs.

We’ve worked with over 2,500 independent audio creators in launching our app, and conducted a detailed survey of podcasters to understand how they felt about the state of podcasting going forward.

Podcasters in our survey report that the enabling tools for podcasting work well: Over 80% of respondents feel well-served in recording, hosting, and distribution. At the same time, we learned that two challenges threaten to stymy the emergence of podcasting. Podcasters need help in growing audience and generating revenue. Without innovation in these two areas, podcasting and on-demand audio more broadly may continue to remain a narrow behavior that is experiencing a brief moment of hype similar to what it saw in 2005.

The Challenge of Growing Audience 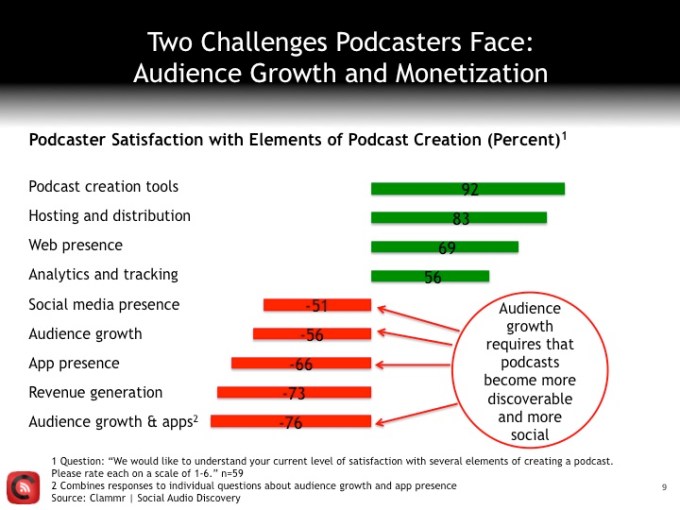 Multiple companies are moving aggressively to address the challenge of audience growth. It’s not lost on astute industry observers that the two most successful new podcast enterprises this year – Serial and Gimlet Media – benefitted from launching on the hugely popular This American Life radio show.

As Mark Ramsey puts it “Few have a launch platform as powerful as This American Life. . . . [Serial] hijacked the attention, time, and listening of public radio fans and moved a portion of it off public radio per se.” We see podcast networks emerging that systematically use cross-show promotion as a form of audience growth. Panoply and PRX’s Radiotopia have built up confederations of high-quality independent radio shows that they both sell ads for and cross-promote, pulling users from one show to another.

Gimlet Media has taken an integrated approach that harkens back to the old Hollywood studio model, creating a stable of own owned-and-operated shows while investing in developing a deep understanding of its listener base that it cycles through new shows. Working from a standing start in 2014, Huffington Post quietly has built up an impressive presence with multiple shows regularly in the top 100. Most recently, WNYC announced the launch of a Podcast Accelerator that promises to super-charge growth for independent producers through exposure to New York Public Radio’s platform.

Several promising start-ups are addressing the audience growth challenge through smart technologies. Spreaker is aggregating smaller podcasters with an integrated platform that combines show production tools alongside distribution through Spreaker’s own listening service that has amassed over 4 million users. PopUp Archive is transcribing and indexing podcasts to power an audio search engine.

With the launch of their powerful audiosear.ch service and APIs, they are providing the community with a much-needed set of tools that open up audio content might otherwise remain hidden. SpokenLayer is bringing new audiences into audio with a highly scalable, cost-effective platform for taking print news content and converting it to audio using human narrators almost in real-time.

By way of full disclosure, our team at Clammr is part of the family companies addressing the audience challenge. Drawing lessons from what Twitter and Instagram have done to increase discovery and sharing by focusing on bite-sized content, we feature personalized streams of audio clips capped at 18 seconds that are sharable and expandable into full-length content.

Finally, larger companies that have established on-demand audiences primarily in music are are bringing their audiences to podcasting, promising to create integrated on-demand audio. Most recently, Spotify announced that it is bringing podcasts to its music platform and partnered with Libsyn, the industry’s gold standard for podcast hosting that powers the lion’s share of top shows.

Soundcloud recently brought its podcasting service out from beta and made it available to all users while French streaming music service Deezer acquired Stitcher, one of the leading podcast apps on the market. In one of the more intriguing industry moves, Amazon’s Audible subsidiary hired NPR’s VP of programming, Eric Nuzum, who as responsible for finding and developing new public radio shows. At Audible, he is the SVP of Original Content and signs point to Audible introducing its large audiobook user base to in-house original audio.

Show Me the Money

A second major challenge podcasters cite in our survey is generating revenue – over 70% of our survey respondents are dissatisfied with their ability to make money from their efforts. Tools like AdSense supported bloggers with relevant ads that were often additive to the visitor experience. Podcasting does not today have a compelling equivalent.

If other digital formats provide any lessons, it is that unheralded independent creators native to the format are just as important for spurring growth as those with roots in traditional media.

For example, PewDiePie—supported by AdSense—reigns as the most subscribed-to channel on YouTube despite the presence of major media companies on the platform. Independent creators who will be the stars of the on-demand audio future must have easy revenue generation tools available in order to sustain their creative efforts.

While podcast networks such as PodcastOne and established intermediaries such as Midroll can generate revenue for established podcasters, we are seeing hosting companies innovate to help new podcasts generate from day one.

Podbean has integrated Patreon crowdfunding directly into its platform, giving podcasters that it hosts a seamless route for raising money directly from listeners. BlogTalkRadio, a long-time industry player, has been undergoing a dramatic set of product upgrades that include automated ad insertion that is tied to the podcast’s content and attractive advertising rev share deals for podcasters using the platform.

The foundational elements for podcasting to take off and lead a transition to on-demand audio are present. Smartphones, reliable high-speed wireless data, and connected in-car entertainment systems are on a path to ubiquity. Just as on-demand has reshaped and improved markets from news to servers (AWS) to personal transportation (Uber) to hospitality (Airbnb), we believe it can do the same in audio. Our team at Clammr is focused solving one piece of the puzzle by adding a social discovery layer to audio. Innovation with additional social and revenue generation tools is well underway – we are excited to be part of a broader ecosystem that is helping podcasting realize its full potential