Oh yes, young feller, that there Yoga Book sure is something. But why don’t you just set a while an’ listen to the stories of an old blogger. ‘Twas back in the old days — before the millennials took over. That’d be 2009 or so. Longer than most remember these days. Let me ask ya something, m’boy. Ever hear tell of a Courier?

Perhaps the most exciting cryptogadget of all time, this never-released device may have been before you walked the Earth. But Lenovo remembers. And they just tried to summon its ghost.

Back then, tablets were yet to have their moment in the sun. It was before Apple had revealed the iPad, and before TechCrunch had finished the ill-fated (and let’s be honest, ill-conceived) CrunchPad. Arriving in concept form to preemptively steal their thunder, however, came Microsoft’s Courier.

These were strange days for Microsoft; the excellent but criminally mishandled Zune was at the zenith of its popularity (such as it was). In fact, just a few days before the Courier dropped, I had just penned a review of the Zune HD, still in my opinion the best portable music player out there. So it wasn’t outside the realm of possibility that Microsoft would do something daring and unexpected like the Courier.

Pictures of the two-screened, folding device were leaked to Gizmodo (it was big on leaks then). The Courier was framed as a sort of smart design notebook with sketching, browsing, text annotation and all kinds of productive and creative functions. It looked fabulous, and honestly, still does. Alas, it was vaporware, and despite great hue and cry from gadget bloggers (the most influential people on the planet), development was discontinued. But we still remember it fondly.

There were two keys to its charm; the first was its fold-flat design, the second we’ll get to later. This book-like form factor is so natural for so many people, and for so many purposes, that it was surprising no one had done it before. I’m still surprised that e-readers haven’t assumed this form. 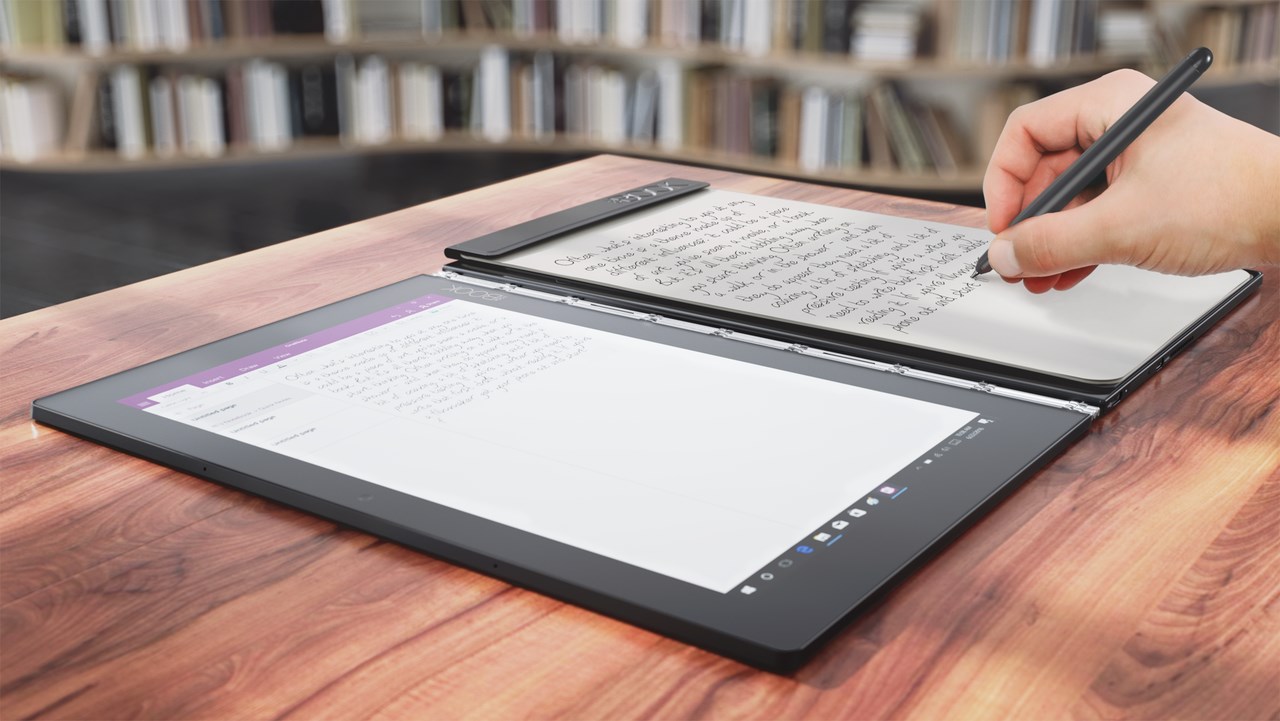 Fast-forward 7 years. The tablet and notebook formats are merging, and the hardware is growing more sophisticated in how that happens. Flipping and rotating Yogas have shown up over the last couple of years, but they never quite enticed. Then the Surface Book showed up, with its unique (and uniquely flawed) hinge, hinting at a future version where the crumb-accruing gap between top and bottom half would be eliminated. Enter the Yoga Book.

Lenovo’s talented engineers have clearly solved one of the obstacles to the Courier’s manifestation in the physical realm. The hinge is a beautiful little piece of engineering, and — presumably — allows the device to be used painlessly in a number of configurations (conformations, really). It’s light, touchable and meant to be used like a notebook (or even with a real paper notebook). 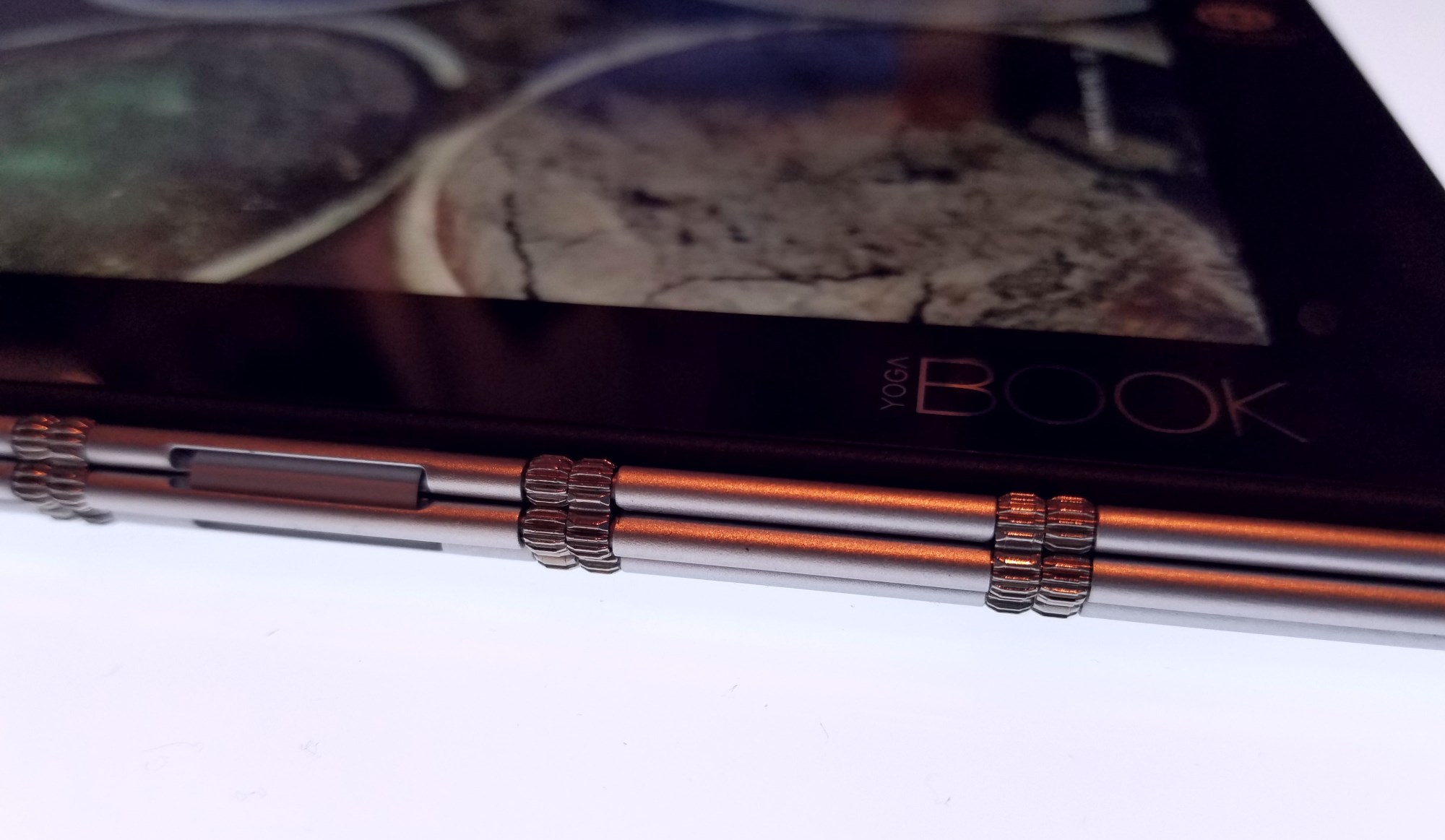 But while this is an admirable step toward the dream of the Courier, it’s still a far cry from the vaporware we fell in love with in 2009.

For one thing, it’s huge. Part of the fun of the Courier was that it was supposed to be about the size of a trade paperback. It was meant to go in your jacket pocket, not in your laptop sleeve. A 10-inch screen and matching keyboard make it an ultra-flat laptop, not a smart notebook.

For another, with one side dedicated to input and one dedicated to display, it’s still only partway to the dream of Courier, which envisioned both sides having both functions, but with subtle differences.

And there’s the key to why Lenovo’s attempt, valiant as it is, falls far short of the (admittedly non-existent) Courier. The Courier was a great example of function preceding form. The device had a concrete goal: to digitize and expand the functions of an actual notepad.

All its functions were centered around this concept: most interactions were with a pen and finger; the interface used pages, tabs and other physical, paper metaphors for navigation and entry. Of course, some of this was alarmingly “skeumorphic” in its imitation of real physical items, but the interactions were nevertheless intuitive: They didn’t just look like sticky notes and pages, they acted like them.

In addition, it added things that anyone who’s ever used a notebook wished they could do. Copy the contents of several pages onto one, or hold some quick notes on a blank page just until they can be inserted into the rest, or annotate a sketch or scrap without interfering with it. And instead of a weird fold in the middle where you can’t write, there’s a multi-functional clipboard and gesture tray! It let its two sides work together in interesting ways, ways that could only ever occur on a device like this. 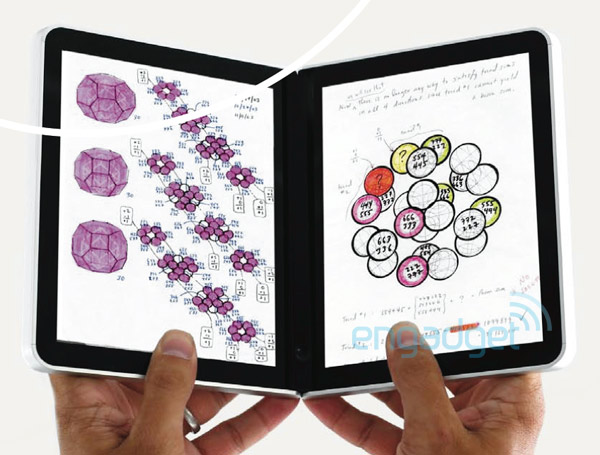 Critically, its designers were also unafraid to compromise functionality in pursuit of this concept. Hand-writing a web address? That’s a terrible idea! But the point was that you weren’t meant to have to do that. You’d have your usual sites and apps ready to open by more intuitive means. Go and do serious browsing on your desktop or something! This device is for other stuff! Do you edit photos on a smartwatch?

The Courier wasn’t meant to replace your laptop any more than an e-reader or smartphone is today. It was a bold attempt to establish a whole new category of device equally distant from tablets as from laptops (and for that matter, paper notebooks). In contrast, the Yoga Book is hampered by its need to be a traditional laptop at some times and a traditional tablet at others, with some added edge cases where the ingenuity of the company’s engineers could be put on display.

It’s a device seeking a purpose, while the Courier was a purpose embodied in a device. The latter is the better, which is why the concept still excites us. With luck, Lenovo or Microsoft will eventually make the leap — they’re both teetering on the edge — and give us the crazy, truly different device we’ve been pining after for 7 years.