Also new is a remote control that includes both a touchpad and motion control.

The remote lets you doing things like fast forward and rewind by pressing on the touch-sensitive trackpad and swiping. And you can move it around, thanks to its accelerometer and gyroscope, when playing games.

Noted Apple CEO Tim Cook about the need for apps and games on the big screen, “over 60% of paid TV consuming is done through an Apple device. When you experience TV through an app, you realize how much better it can be.”

Despite a number of leaks, one thing that was still uncertain was the new Apple TV’s pricing, and whether or not it would offer two models with varying storage capacities.

Developers receive access to tvOS today, and the Apple TV ships in October. 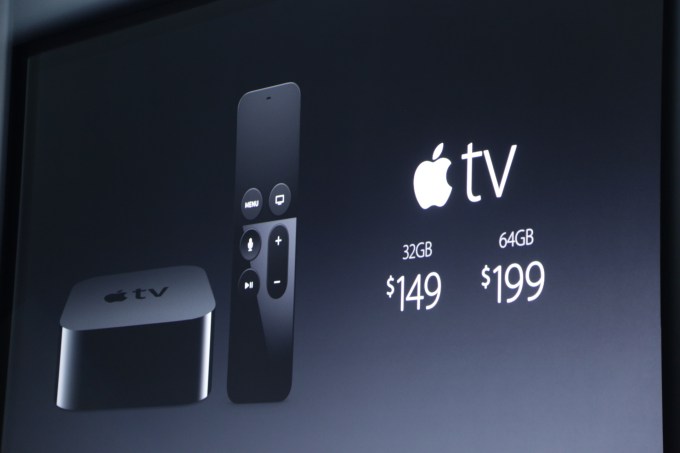 In terms of its specs, the new Apple TV includes the A8 processor – the same that powers the iPhone 6 and iPhone 6 Plus, but not the faster A9 chip that’s found in the newly announced iPhone 6S and iPhone 6S Plus. However, the A8 is a big upgrade over the current generation of Apple TV devices which feature the single-core A5.

In addition, the device will continue to offer a power plug, HDMI port and Ethernet port on the back.

The device is also noticeably thicker, as had been reported previously as well. 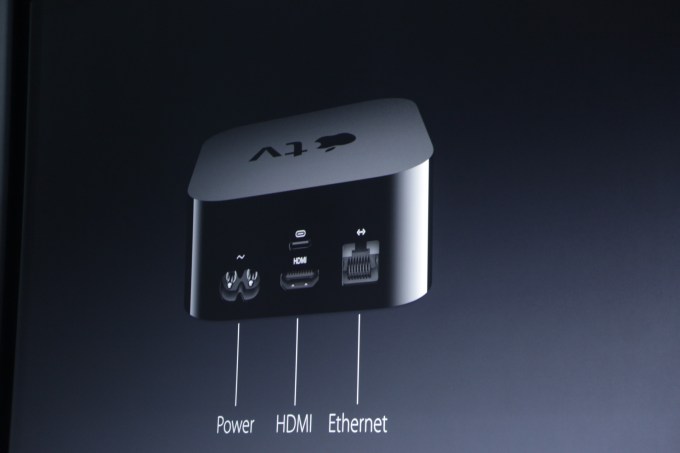 Beyond the hardware, the bigger news about today’s Apple TV is not what’s inside but what it can do. Most notably, it’s now running a TV-optimized version of iOS, which allows it to offer Siri support, also as recently reported. This allows users to able to take advantage of voice-based searches, including also Apple’s “Proactive” search that will allow for system-wide search.

Universal search, a useful feature found on competing connected-TV platforms like Roku, is now enabled on Apple TV, too.

That way, you can search for a title, then see results from the iTunes Store, the Apple Music Library, as well as online services like Netflix, Hulu, HBO or Showtime.

During the demo, the company showed some examples of universal search in action, including suggestions like “Show me movies. Just the new ones!” Or “Show me movies with Jason Bateman. No, Jason Bourne!”

Siri was a big focus for today’s event, in fact, as even the press invitations read “Hey Siri, give us a hint,” and the mobile assistant teased those who asked it that same question in the days leading up to Wednesday’s announcements with jokes about “checking the rumor blogs” or how you look “cute when you’re desperate for information.” 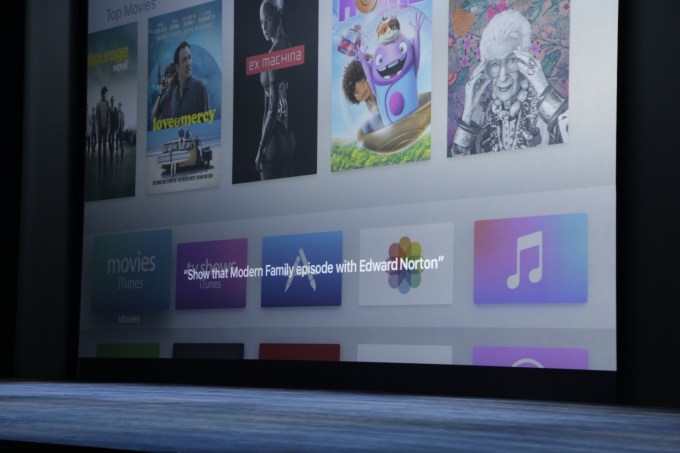 On the new Apple TV, Siri will allow for searching across multiple apps, though not all of your apps, and show all of your viewing options on one screen. And it can do more than just pull up apps and movies, Apple noted. You can also ask it questions about sports and the weather, just like you could any other digital assistant.

Of course, being powered by iOS 9, called “tvOS,” means the user interface for Apple TV has had a bit of a makeover too. The device now features animated wallpapers and screensavers, for example and revamped interface.

Some developers have already been able to tinker around with tvOS, including Hulu, Ubisoft, Disney, and Activision, Airbnb, Hipster Whale (Crossyroad makers), Harmonix, Gilt, MLB, and others.

The variety of developers on display shows that while gaming will be a big focus for Apple TV, it’s not the only one. Apple is also pitching the device as a way to shop or even manage your vacation. 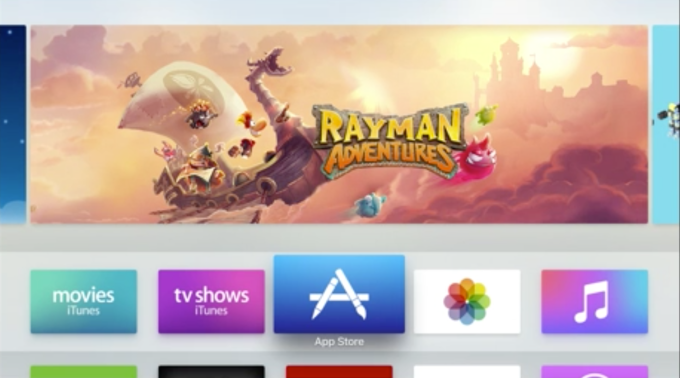 The other big news on the software side is the debut of the Apple TV App Store and accompanying SDK for app developers. The App Store will be a lot like the store on iOS, as it also includes top charts and categories, for instance. But app developers will be able to make their apps a universal purchase – meaning, you can buy an app for iPhone, iPad, and Apple TV all at once.

In addition, Apple is building in a mechanism that’ll let you play a game on your phone on the way home, and resume it on your big screen when you get there.

Apple means to attract gamers and gaming developers to its hardware and away from traditional consoles, like the Xbox, Wii and PlayStation, which would be no small feat. 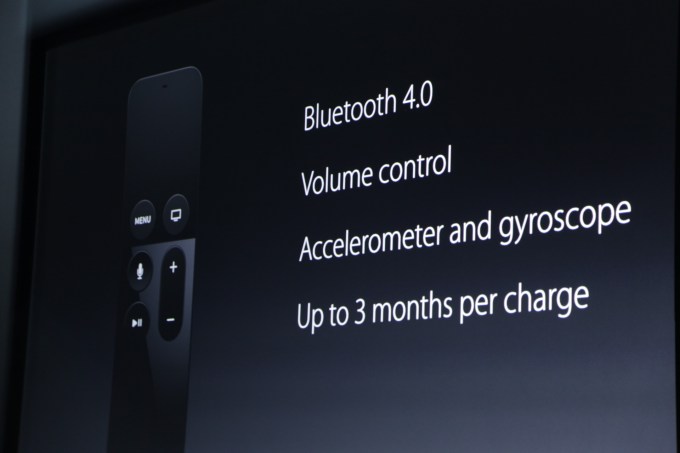 Alongside support for apps and games and Siri, the Apple TV ships with a new remote that includes physical buttons, motion controls support, and a glass touch surface at the top.

But its the new remote that’s making gaming so interesting on the new device – with Wii-like motion controls and support for multiplayer gaming, players can do things like swing the remote to bat a baseball, for example.

The remote works over Bluetooth 4.0, rather than infrared — so no line of sight is required. It’ll be able to control your TV volume/power over CEC, and the rechargeable battery lasts 3 months per charge.

The promise of an App Store and gaming support has led some analysts to already predict that Apple TV would have meaningful impact on Apple’s bottom line. For instance, J.P. Morgan recently estimated that Apple could sell 24 million units of the new Apple TV in 2016.

This revamp – Apple TV’s first notable refresh since the current design was unveiled in late 2010 – could move the device further up the chart in terms of connected TV device sales, as well, where it has been lagging. A Parks Associates report from August stated that Roku led streaming media device sales in 2014, followed by Google and Amazon, then Apple TV.

Missing from the Apple TV announcement was the long-rumored internet TV service. Earlier reports indicated Apple was in discussions with content partners to launch a $40 per month replacement for cable TV. But later rumors pointed to this service being delayed until next year.