It has been difficult to attract investors to the digital startup space in Latin America. This is because of a variety of reasons, including the lack of a track record of established VC firms in Latin America, the immaturity of the new generation of entrepreneurs and the scarcity of exit strategies in the region.

Much has changed in this region in the past 15 years in terms of its digital ecosystem creation and the use of new technologies. Today, with more than six countries deserving investment-grade debt by S&P (Brazil, Chile, Colombia, Mexico, Panama and Peru, among others), Latin America is radically different. Successful technology companies and venture capitalist that have accompanied these countries have reaped generous benefits.

Successful digital entrepreneurs have channeled the ubiquitous penetration of social and mobile technologies to drive growth for their companies. It should speak volumes that São Paulo, Rio de Janeiro, Buenos Aires and Bogotá individually surpass New York City in terms of Facebook, Skype or WhatsApp subscribes and usage. It’s not a surprise that The Wall Street Journal called Brazil, “The Social Media Capital of the Universe.”

As mentioned in an earlier article, “Producing Unicorns in the Land of Samba, Fútbol and El Dorado,” Latin America can claim 17 pure Internet/software companies with valuations north of $250 million. Half of these companies were founded after the new millennium, and close to 40 percent over the past 10 years. Clearly, we’re seeing an uptick in the creation and acceleration of these companies.

“Smart Venture Capital” has always been intrigued by the potential of a large middle class that, increasingly, was the first to adopt new technologies. Amazed by the adoption and use in Latin America of two companies, Kazaa and Skype, Niklas Zennstrom quickly understood there was a big opportunity. In 2008 his company, Atomico, opened an office in Sao Paulo, which is now headed by Carlos Pires. Many followed thereafter.

The days when it was difficult to attract leading PE/VC firms to the digital startup space in Latin America are behind us.

According to the Latin America Private Equity and Venture Capital Association (LAVCA), capital committed to Latin America, dedicated private equity and venture capital funds reached US$10.39 billion in 2014. More surprising, though, is the growth of VC investments deployed. Specifically in 2014, venture capital investors deployed US$525.6 million through 186 transactions in Latin America, an 8.3X growth since 2010.

Early stage investments have been growing consistently since 2010, when just US$63 million was deployed in venture deals. Activity in 2014 reflected an increase of 24 percent in capital invested and 56 percent in number of deals compared to 2013.

Today we can count at least 11 companies that are active in Latin America and belong to the big leagues of venture capital and private equity. They come in several flavors (Note: only funds with assets under management larger than $250 million were covered): 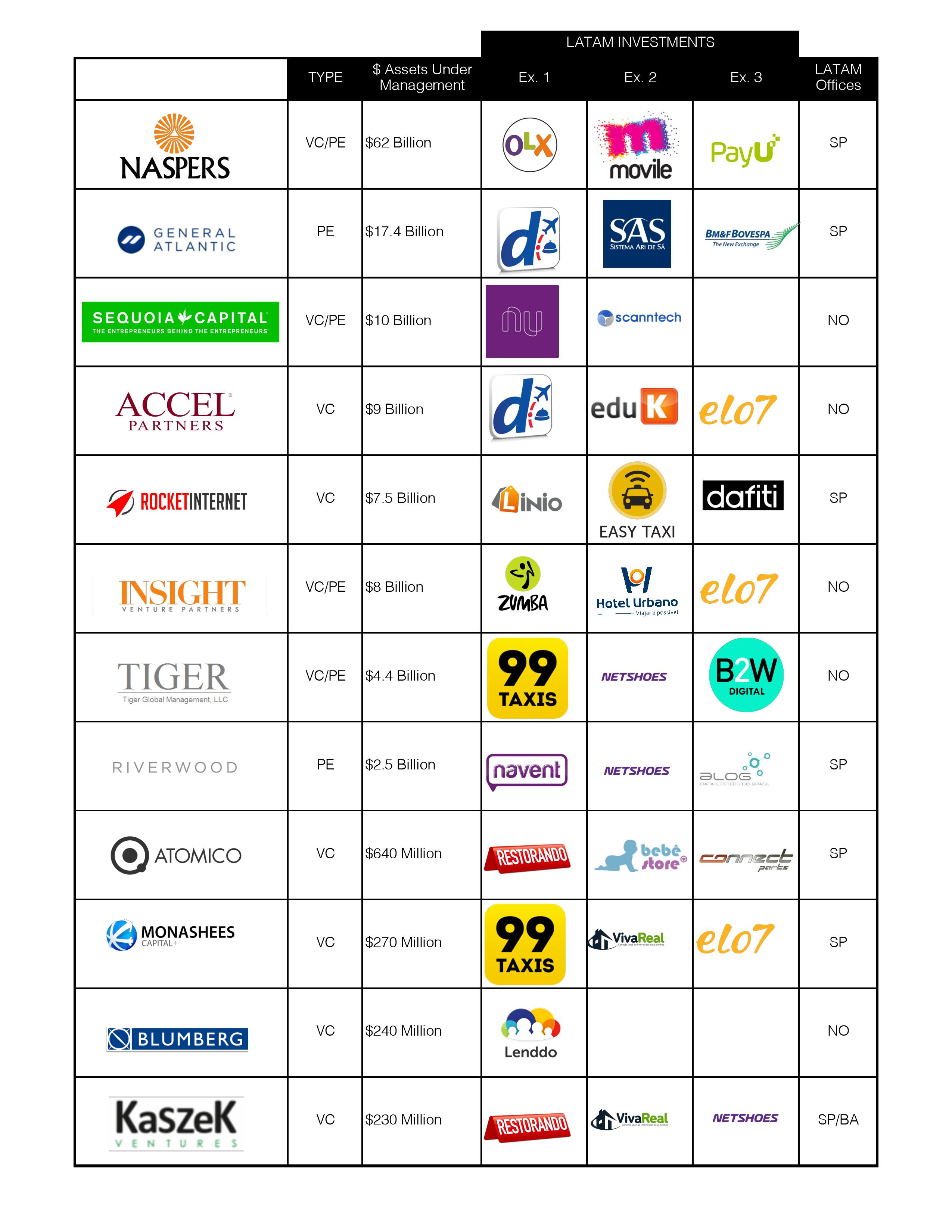 The days when it was difficult to attract leading PE/VC firms to the digital startup space in Latin America are behind us. Over the past 10 years, large exits like Mercado Libre (NASDAQ), B2W Digital (BOVESPA), TOTVS (BOVESPA), Globant (NYSE) and Linx (BOVESPA) have given investors considerable confidence and proven that Latin America is up to the task of competing in this new 2.0 world.

Similarly, entrepreneurs have matured, the ecosystem has evolved and the most prestigious firms are on the ground creating value for them and for the startup environment.