There was a time, not very long ago when Latinos living in the U.S. could only point to two successful Internet/software startups in their countries of origin: Mercado Libre and Despegar/Decolar. While these companies were very successful, it was difficult for us to explain why no other startups in Latin America had flourished.

Both of these companies had been founded in the early days of the Internet (i.e. 1999) and few had developed after that. Furthermore, for those of us (like me) with a Brazilian ego and heritage, it was an added insult that both of these companies were Argentinean. Indeed, as illustrated by “La Guerra del Fútbol,” 1969 war between Honduras and El Salvador because of a qualifying round, sports rivalries transcend the field in this part of the world.

Four World Cups after these companies were founded (an important unit of time across Latin America), several factors, both on the supply and demand side, have shaken up this startup ecosystem and planted the seeds for its rejuvenation.

Leading up to the 2014 Brazil World Cup, in 2010, with President Lula da Silva at the helm, Brazil embraced a plan to take high-speed service to reach all Brazilian towns — at affordable prices — as a way to modernize the economy and create the technological infrastructure that the country needed to compete.

Back then for example, some residential broadband customers were paying more than $250 a month for 1Mbps, while in the U.S., users could get 10 times that speed for less than $30 month.

Today over 40 percent of the country’s households have broadband connectivity with an average of 2.6Mbps.

As Korean and Chinese device manufacturers conquered their cost curves through increased volumes, sub-$100 devices entered the market. This led to an inflection point in smartphone penetration, leading it to the 25 percent to 35 percent levels. in addition, increased competition in data plans driven by European carriers like Telefónica, TIM, Portugal Telecom, and Millicom among others, and local ones Claro and Oi, further augmented affordable access to technology.

These developments enabled Latin America to have one of the highest wireless penetrations in the world. For example Brazil’s population of 200 million, and over 240 million SIM connections, leads it to outperform the world in terms of mobile penetration and carries the highest SIM-to-subscriber ratio (currently at 2.1 to 1). These factors will continue to impact adoption, and smartphone penetration is expected to cross 50 percent by 2018.

Latinos Consumed Social Media Like There Was No Tomorrow

Given access to cheap phones, cheap data plans and a very gregarious DNA, Latinos proved that they were insatiable with regards to social media and messaging. It’s well known that São Paulo, Rio de Janeiro, Buenos Aires and Bogotá individually surpass New York City in terms of Facebook, Skype or Whatsapp users and usage. What’s more, Brazilians spend on average 3.8 hours on social media each day compared with 2.7 hours in the United States. It’s no wonder the Wall Street Journal called Brazil “The Social Media Capital of the Universe.”

Foreign smart venture capital was intrigued by the potential of a very large growing middle class that were early adopters of technology and spent inordinate amounts of time on the Internet.

This perception was further rounded by some capital markets exits that started in 2005. In March of that year, Submarino.com (later to be merged with Americanas.com to become B2W Digital) had its debut in the Sao Paulo stock exchange market: BOVESPA. Soon after, Submarino.com was joined by TOTVS – BOVESPA 3/2006, and then Mercado Libre – NASDAQ 8/2007

Amazed by the adoption and usage in Latin America of both of his companies Kazaa and Skype, Niklas Zennstrom quickly understood that there was considerable upside to be had by investing in this area and in 2010 his VC firm, Atomico, opened an office in Sao Paulo.

In part due to these developments, other large VCs/PE like Tiger Global Management, Insight Venture Partners, Riverwood Capital, Naspers, Rocket Internet, and Accel Partners, among others, entered the market. As Kevin Efrusy, from Accel Partners put it recently: “A few of us went down [there] and became passionate about the market. We dove in and got excited about it.”

Shortly thereafter, local VCs like Monashees, and Kaszek, among others, started to appear.

With these disruptive ingredients added to the mix, Latin American countries quickly accelerated the pace and today can claim 17 pure Internet/software companies with valuations north of $250 million.

Close to three-fourths of these companies are based in Brazil and one-fourth in Argentina. Only one in Mexico and one in Colombia. Five of them have IPO’d: Mercado Libre (NASDAQ), B2W Digital (BOVESPA), TOTVS (BOVESPA), Globant (NYSE), Linx (BOVESPA). And of the privately held companies except for UOL, 100 percent of them have received funding from foreign VC/PE. 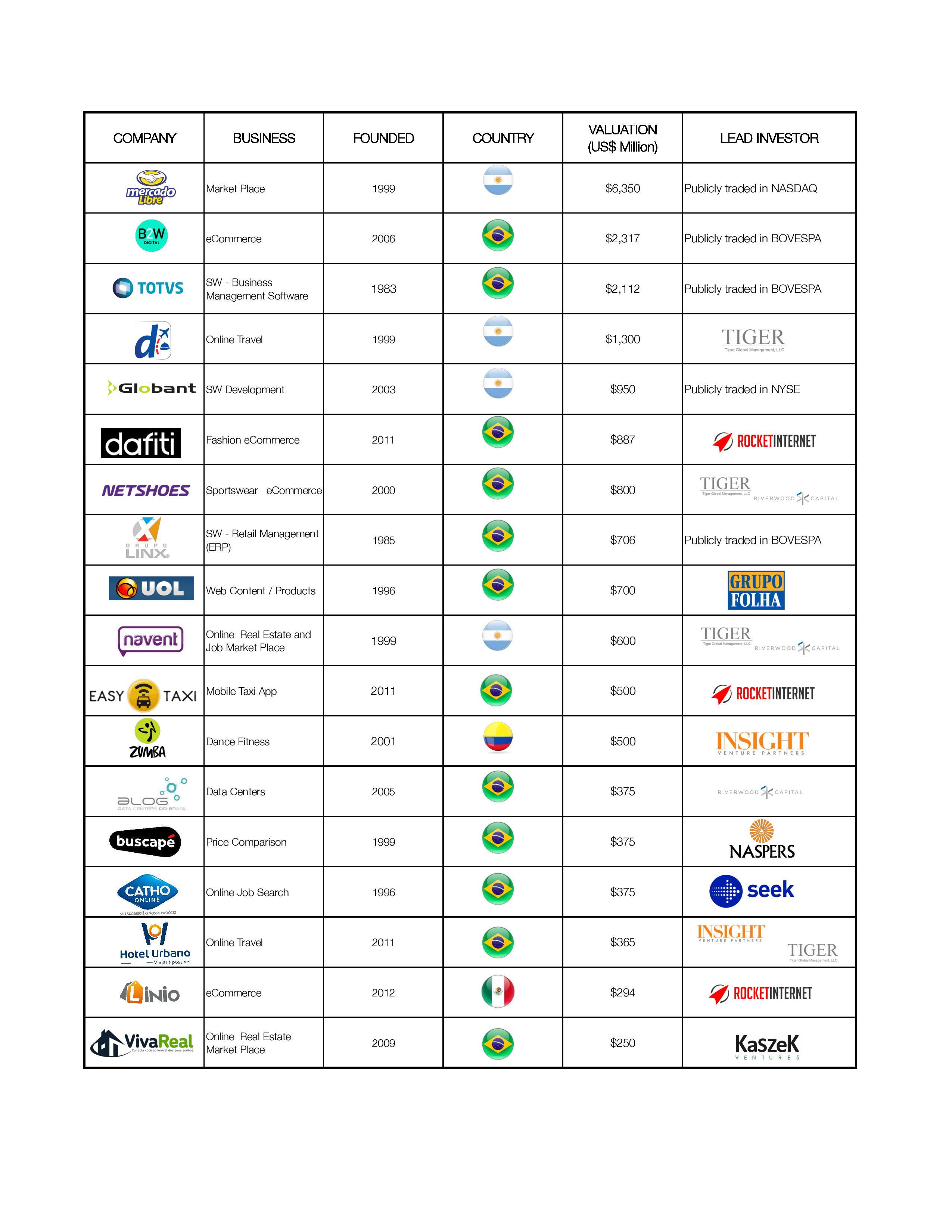 We still have a very long way to go. There are only four companies with a valuation north of US$1 billion in LATAM, while for perspective, there are 87 unicorns in the U.S. and eight only in New York.

It should speak volumes to all domestic VC/PE firms in Latin America that local entrepreneurs are going internationally to access capital. Aside from Monashees (Sao Paulo) and Kaszek (Montevideo/Buenos Aires), I can’t think of a local VC fund (not PE) in LATAM that manages more than US$150 million.

Compare this to Israel where there are at least three local VC funds managing north of US$1 billion. However, it’s understandable that these international firms are farther up the learning curve of investing because they’ve been at it for longer (i.e. better at picking winners), and they feel much more comfortable with the risk/upside equation than the domestic players are. We should expect this to change quickly.

Either way, we should definitely keep a close eye on Colombia and the creation and execution of Bancoldex’ Capital Fund of Funds as a means to accelerate an influx of smart capital into the Pacific Alliance countries (206 Million population and US$3.4 Trillion GDP; Mexico, Colombia, Chile, Perú).

Specifically, Bancoldex, Colombia’s state owned development bank, is setting up Latin America’s first fund of funds with the purpose of fostering dynamic growth, by bringing foreign smart VC/PE to the region focusing on growth companies while building an ecosystem of international and local VCs and smart entrepreneurs. The fund expects to have US$500 Million under management to mobilize US$5 billion in the next 10 years.

While Colombia, Chile, Perú and México rate well in the World Bank’s Easiness of Doing Business Index, Brazil, by far the largest economy in the region with $2.3 trillion in GDP and a population of 200 million, once again came in with poor marks on this front, and ranked 120 out of 189 countries (Singapore came in first and Eritrea last). A very high taxation rate on both income and employee social security, combined with abundant bureaucracy required to start a company (6-9 months depending on who you ask), can be showstoppers for many.

A globalized world requires Latin America to have high levels of innovation that generate substantial added value to its people, and not to rely solely on commodities with uncertain futures (i.e. oil, coal, agricultural products). The impact that a sub $60 oil barrel is having in the region is vast, and as such, LATAM governments and entrepreneurs should seek a competitive differentiator able to generate a dynamic growth not only for themselves but also for the region.

With over 17 pure Internet/software companies worth more that US$250 million, many of them developed over the past four years, Latin America has proven that it’s up to the task of competing in this new 2.0 world. Let’s make sure that we don’t have to wait another four World Cups to point to a large, valuable and thriving digital economy.