In May 2020, Intel announced its purchase of Moovit, a mobility as a service (MaaS) solutions company known for an app that stitched together GPS, traffic, weather, crime and other factors to help mass transit riders reduce their travel times, along with time and worry.

According to a release, Intel believes combining Moovit’s data repository with the autonomous vehicle solution stack for its Mobileye subsidiary will strengthen advanced driver-assistance systems (ADAS) and help create a combined $230 billion total addressable market for data, MaaS and ADAS.

Before he was a member of Niantic’s executive team, private investor Omar Téllez was president of Moovit for the six years leading up to its acquisition. In this guest post for Extra Crunch, he offers a look inside Moovit’s early growth strategy, its efforts to achieve product-market fit and explains how rapid growth in Latin America sparked the company’s rapid ascent.

In late 2011, Uri Levine, a good friend from Silicon Valley and founder of Waze, asked me to visit Israel to meet Nir Erez and Roy Bick, two entrepreneurs who had launched an application they had called “the Waze of public transportation.”

By then, Waze was already in conversations to be sold (Google would finally buy it for $1.1 billion) and Uri was thinking about his next step. He was on the board of directors of Moovit (then called Tranzmate) and thought they could use a lot of help to grow and expand internationally, following Waze’s path.

At the time, I was part of Synchronoss Technologies’ management team. After Goldman Sachs and Deutsche Bank took us public in 2006, AT&T and Apple presented us with an idea that would change the world. It was so innovative and secret that we had to sign NDAs and personal noncompete agreements to work with them. Apple was preparing to launch the first iPhone and needed a system where users could activate devices from the comfort of their homes. As such, Synchronoss’ stock became very attractive to the capital markets and ours became the best public offering of 2006.

After six years with Synchronoss while also making some forays into the field of entrepreneurship, I was ready for another challenge. With that spirit in mind, I got on the plane for Israel.

I will always remember the landing at Ben Gurion airport. After 12 hours traveling from JFK, I was called to the front of the immigration line:

“Hey! The guy in the Moovit T-shirt, please come forward!”

For a second, I thought I was in trouble, but then the immigration officer said, “Welcome to Israel! We are proud of our startups and we want the world to know that we are a high-tech powerhouse,” before he returned my passport and said goodbye.

I was completely amazed by his attitude and wondered if I really knew what I was getting into.

The opportunity in front of Moovit

At first glance, the numbers seemed very attractive. In 2012, there were roughly seven billion people in the world and only a billion vehicles. Thus, many more people used mass public transport than private and users had to face not only the uncertainty of when a transport would arrive, but also what might happen to them while waiting (e.g., personal safety issues, weather, etc.). Adding more uncertainty: Many people did not know the fastest way to get from point A to point B. As designed, mass public transport was a real nightmare for users.

Uri advised us to “fall in love with the problem and not with the solution,” which is what we tried to do at Moovit. Although Waze had spawned a new transportation paradigm and helped reduce traffic in big cities, mass transit was a much bigger monster that consumed an average of two hours of each day for some people, which adds up to 37 days of each year*!

What would you do if someone told you that in addition to your vacation days, an app could help you find 18 extra days off work next year by cutting your transportation time in half? 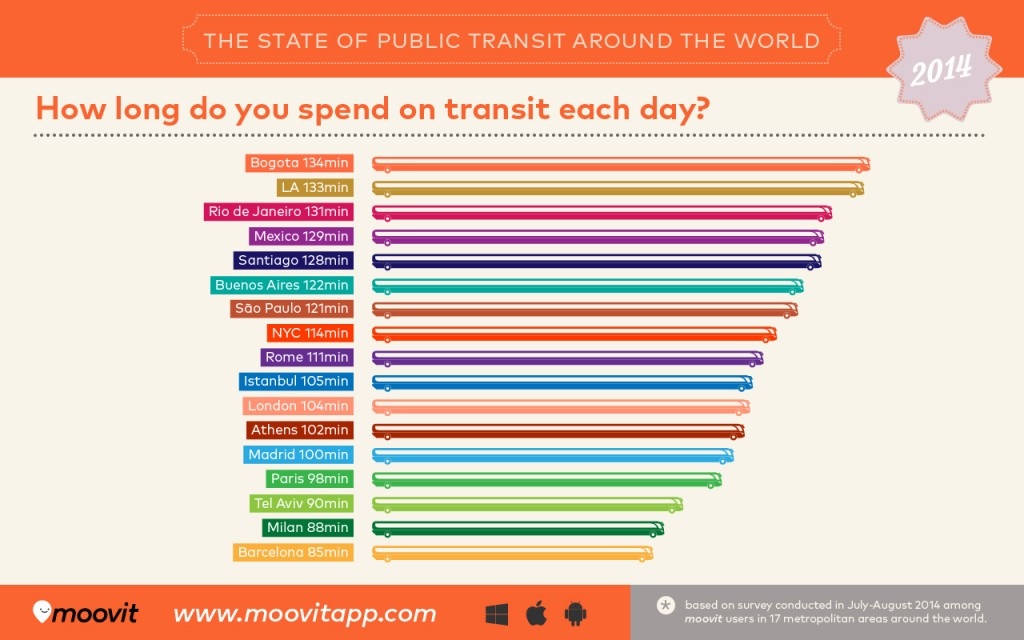