Apple has just released its fiscal Q3 2015 earnings, reporting $49.6 billion in revenue, $10.7 billion in net profit representing $1.85 per share. Compared to the year-ago quarter, it corresponds to a growth of 32.5 percent in revenue and an impressive 44.5 percent jump in EPS. Despite this impressive growth rate, shares are currently falling in after-hours trading — it’s a bit ridiculous.

Expectations were pretty high following Apple’s last two blockbuster quarters — the company reported the largest corporate quarterly earnings of all time on Q1 2015 largely thanks to the iPhone 6 and 6 Plus.

Fortune’s consensus among analysts was for Apple to report earnings of $1.81 per share on $49.50 billion in revenue, with both revenue and EPS exploding 47 percent and 34.6 percent, respectively; this is an insane growth prediction.

Apple’s own guidance from its last earnings release predicted between $46 billion and $48 billion in revenue, with gross margin between 38.5 percent and 39.5 percent. Apple’s guidance has been accurate for the past couple of years, except for the past two quarters. At the time, Q1 2015 was the largest corporate quarterly earnings of all time, and even Apple couldn’t predict that. While Q2 2015 wasn’t as big, it was largely above Apple’s guidance and the street’s expectations.

During this quarter, Apple also launched Apple Music. As the company opted for a three-month free trial, it’s hard to predict Apple Music’s success. But the company said that “millions and millions” of people are already using Apple Music. Read more in our separate post.

“We had an amazing quarter, with iPhone revenue up 59 percent over last year, strong sales of Mac, all-time record revenue from services, driven by the App Store, and a great start for Apple Watch,” Apple CEO Tim Cook wrote in the release. “The excitement for Apple Music has been incredible, and we’re looking forward to releasing iOS 9, OS X El Capitan and watchOS 2 to customers in the fall.”

This quarter, Apple sold 47.5 million iPhones, 10.9 million iPads and 4.8 million Macs in the quarter. Compared to Q3 2014, iPhone sales grew by 34.9 percent while iPad sales declined by 17.9 percent. Mac sales are up 8.8 percent. Read all the details about hardware sales.

International revenue now represents 64 percent of the company’s total revenue. Last quarter was a massive quarter when it comes to sales in China. It was Chinese New Year, revenue soared 71 percent. Many expect the Apple Watch to work well on the Chinese market, but the iPhone is still a massive success already, driving the company’s bottom line. Sales in Greater China grew 112 percent year over year — mind blowing. Read more on China in our separate post.

Minutes after the release, shares are trading at $122 in after-hours trading, 6.69 percent below today’s closing price. Apple has been doing incredibly well on the stock market for the past six months. Today’s miss as well as Apple’s guidance explain today’s correction. 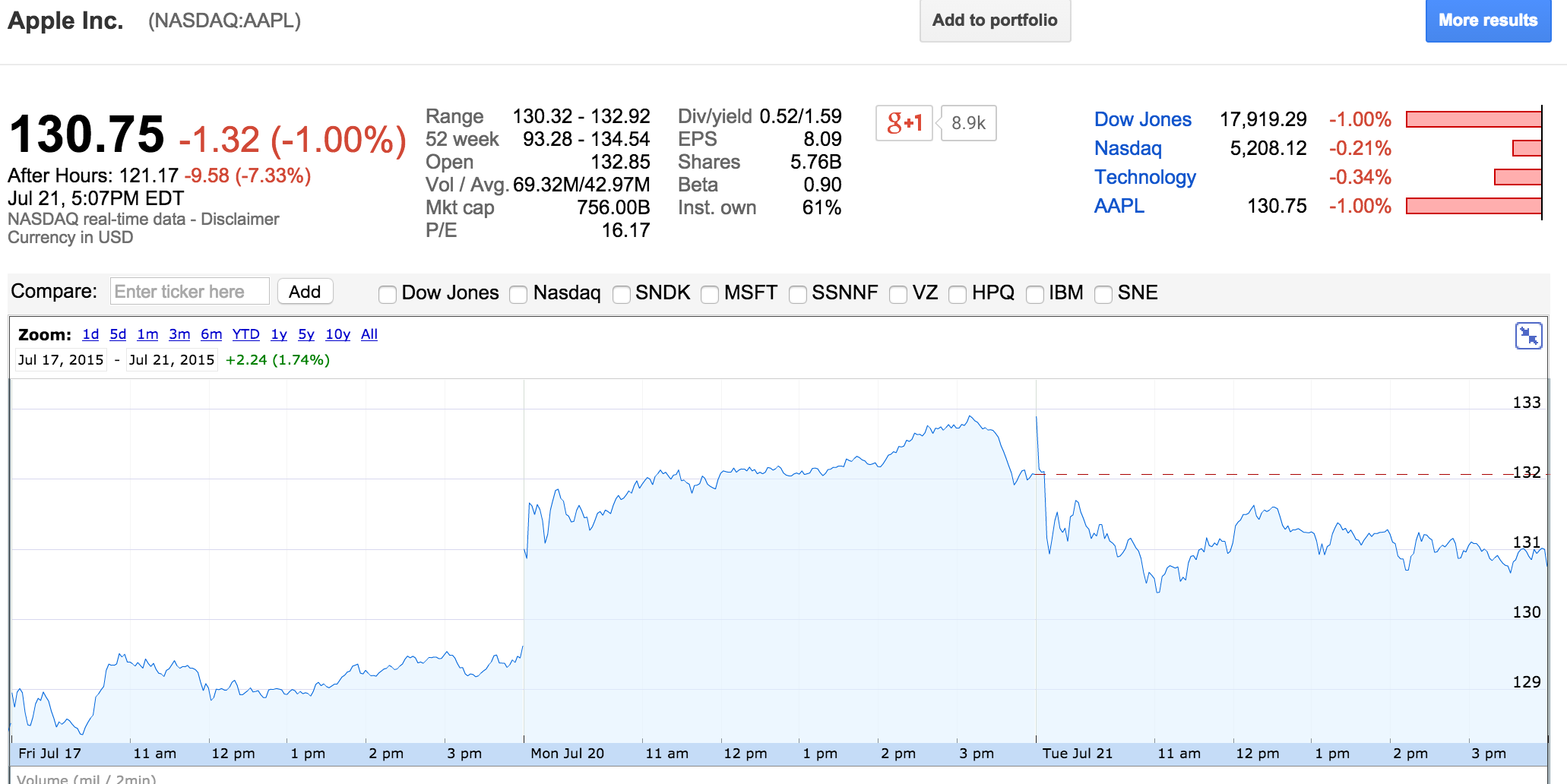