Apple has just released its fiscal Q2 2015 earnings, reporting $58 billion in revenue, $13.6 billion in net profit representing $2.33 per share. Compared to the year-ago quarter, it corresponds to a growth of 27.2 percent in revenue, and an impressive 40.4 percent jump in EPS (adjusted for the 7-for-1 split).

Expectations were pretty high following Apple’s blockbuster quarter three months ago — the company reported the largest corporate quarterly earnings of all time. And it turns out that this quarter was Apple’s second-largest earnings of all time. In particular, services are now a $5 billion business, and Apple reported a gross margin of 40.8 compared to 39.9 for Q1 2015.

Apple is increasing its share buyback program with an authorization of $140 billion compared to $90 billion last year. Stockholders will also get a 11 percent higher dividend of $0.52 per share.

Fortune’s consensus among analysts was for Apple to report earnings of $2.21 per share on $56.85 billion in revenue, with both revenue and EPS exploding more than 24.7 percent and 33.1 percent, respectively; this is an insane growth prediction.

Apple’s own guidance from its last earnings release predicted between $52 billion and $55 billion in revenue, with gross margin between 38.5 percent and 39.5 percent. Apple’s guidance has been accurate for the past couple of years, except last quarter. Q1 2015 was the largest corporate quarterly earnings of all time, and even Apple couldn’t predict that.

“We are thrilled by the continued strength of iPhone, Mac and the App Store, which drove our best March quarter results ever,” Apple CEO Tim Cook wrote in the release. “We’re seeing a higher rate of people switching to iPhone than we’ve experienced in previous cycles, and we’re off to an exciting start to the June quarter with the launch of Apple Watch.”

This quarter, Apple sold 61.2 million iPhones, 12.6 million iPads and 4.6 million Macs in the quarter. Compared to Q2 2014, iPhone sales grew by 40 percent while iPad sales declined by 23 percent. Mac sales are up 10 percent. Read all the details about iPhone sales and Mac sales.

International revenue now represents 69 percent of the company’s total revenue. Q1 is always Apple’s biggest quarter because it’s during the holiday season in most of the world. But Chinese new year happens during Q2 and not Q1. That’s why revenue has been growing in China quarter-over-quarter, driving the company’s bottom line. Read more on China in our separate post.

Minutes after the release, shares are trading at $133.91 in after-hours trading, 0.95 percent above today’s closing price. Apple has been doing incredibly well on the stock market for the past three months. 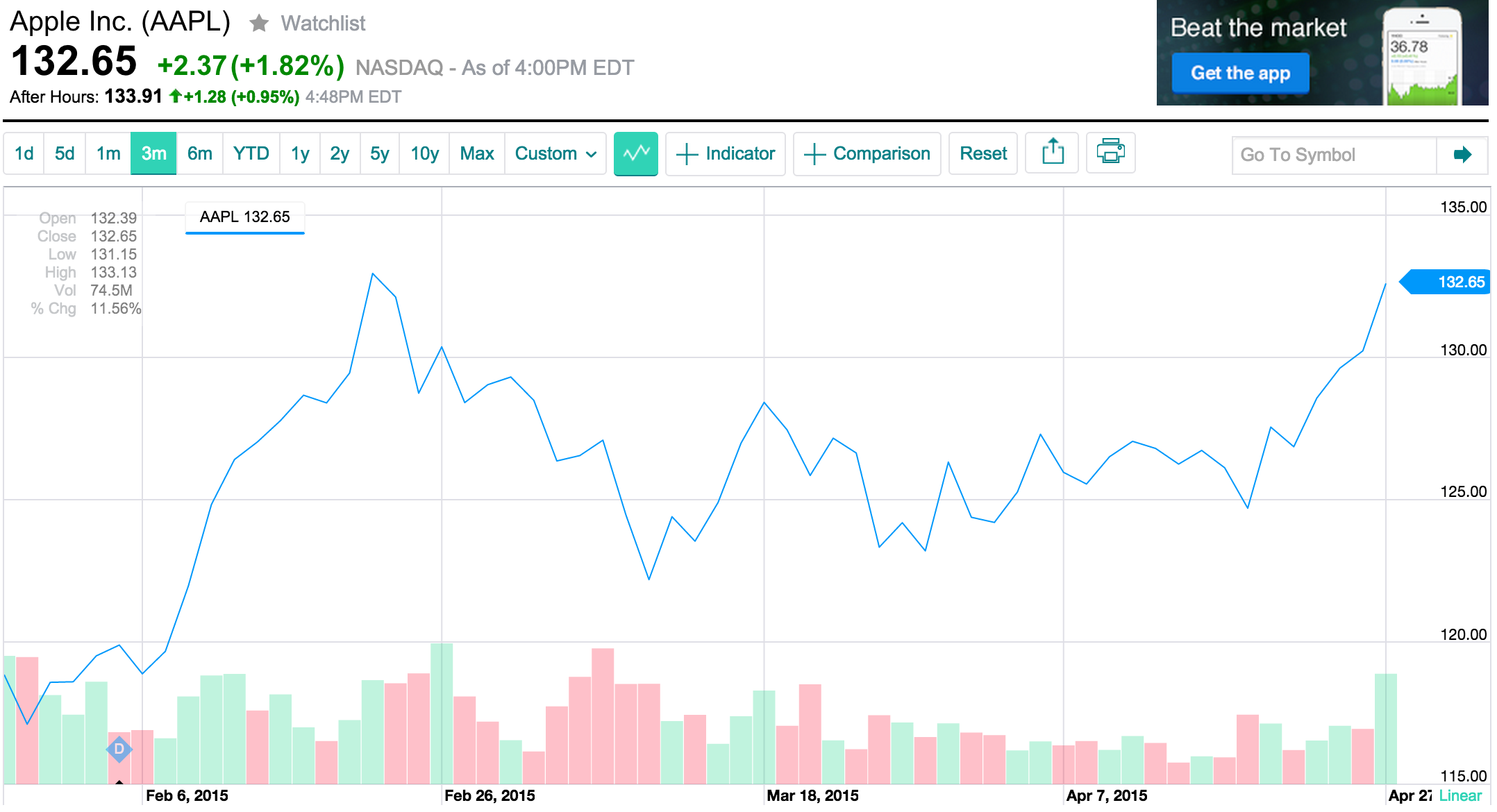