Augmented Reality and Virtual Reality won’t get going properly until next year, but we’re already seeing a healthy level of competition between early market players.

While internal market competition is inevitable, the fight that really matters is between AR/VR’s installed base and the huge incumbent smartphone and tablet market (PCs and consoles enable VR, rather than competing with it).

There are more than 4 billion smartphones and tablets today, and this is set to hit 6 billion by 2020. In contrast, AR and VR hope to go from a standing start in 2016 to hundreds of millions of units in the same timeframe.

So while $150 billion AR/VR revenue by 2020 is a really big number, the trillions generated by mobile put it in perspective. AR and VR companies should have nightmares about Apple, Samsung, Huawei, Lenovo and Xiaomi, not each other.

To hit true market scale, AR and VR will need to rapidly transition from 2016’s early adopters to 2020’s mass consumers by delivering against 7 key drivers.

Some are already in place, others are hard to do, a handful won’t be possible for 12-18 months, and a few aren’t on product roadmaps yet. These drivers will determine when and how AR and VR achieve their potential. Our Reality Matrix segments the market, positions early market leaders, and provides context for understanding the drivers. It’s worth noting that this is a snapshot at Q2 2015. Things might change a lot in the next 6 months. 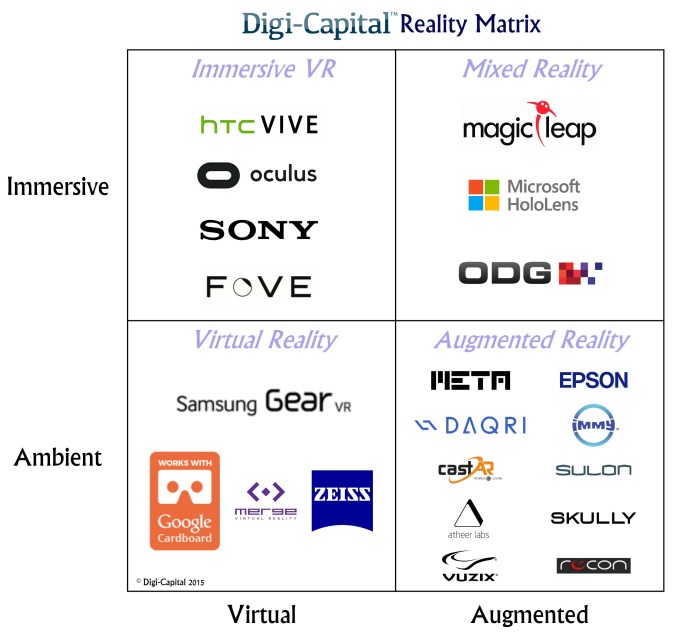 The Reality Matrix is made up of four sectors, with some players operating across them to meet different user needs.

AR and VR share some common drivers, but the problems they solve are different. So what will shape AR and VR’s future?

Mobility: AR can be used anywhere because it doesn’t block out the real world. This freedom is a major advantage, but AR needs to become more mobile than mobile to compete. This means untethered platforms, all day battery life, and mobile quality of service for voice and data. If you can’t make phone calls or browse outside Wi-Fi range all day, it’s not going to replace your smartphone. VR blocks out the real world, so is best in controlled environments (home, office, train, plane) where users won’t fall over. Mobility isn’t that big a deal for VR, although it’s a big plus for mobile VR like Samsung’s Gear VR.

Vision: AR and VR are all about vision. Users already have smartphones with retina displays (i.e. no visible pixels), and want their eyes and brains kept happy at all times. If AR doesn’t end up looking as good as Iron Man or Big Hero 6, mass consumers won’t buy it. VR users who see individual pixels or get eye strain also aren’t going to become a mass market, which is why some solutions have already addressed those issues. The technical detail is too far into the weeds to extract here, but the critical elements are field of view, depth of focus/depth of field, vision correction, image resolution, and luminosity/viewability.

Immersion: Truly immersive experiences are magical, lifting the spirit and compelling users to want more. This is crucial for Immersive VR and Mixed Reality, although not for some AR applications where users need to clearly distinguish real from virtual (e.g. head up displays in cars). The keys to immersion are position tracking (spatial and rotational), jitter, object stability, audio quality, and audio tracking (stereo vs 3D).

Usability: The starting point for AR and VR is to at least match what incumbent platforms have done for years. This driver includes processing power (a tradeoff with battery life for AR and host platform cost for VR), user comfort (motion sickness for VR and weight for AR), and user input controls (controller, hand/body, eye, voice, user position, environment). AR/VR’s unique processing needs could be the next big market for Intel, Qualcomm, Nvidia and ARM.

Flexibility: AR is a general purpose computing device, and will be used for as many different applications as smartphones and tablets today. So cross-platform operating systems and SDKs for AR and VR make developers’ lives a lot easier. Mixed Reality holds even greater promise by providing the ability to switch easily between AR and VR on the same device, or presenting users with virtual objects which appear solid in bright daylight.

Wearability: Mass consumer technology looks beautiful and feels great to use without compromise. Putting something on your face is more personal than pulling a phone out of your pocket, with design style and comfort top of the list. AR faces greater challenges than VR because of its usage on the street, with tradeoffs between size, weight and power dependent on battery life and efficient CPUs and GPUs.

Affordability: The elephant in the room is price. Immersive VR must follow the path trodden by PCs and consoles to reach a mass audience. Ambient VR needs to be even less expensive, which OnePlus has decided means free. Verizon, AT&T and T-Mobile remain to be convinced that subsidizing AR and Mixed Reality like smartphones is a good idea. This means buying into those platforms becoming the future of mobile voice and data revenues. AR players should be talking to the telcos now, because there’s a lot of educating to do.

Some of the brightest minds and best investors are working hard to build AR and VR’s future from Silicon Valley to Shanghai. It’s going to be a wild ride and could be a bumpy one, but the next Apple might come out of it (unless Apple gets there first).