Meta — which recently presented at TechCrunch Disrupt SF 2014 — today began to ship the final version of its Meta 1 Developer Kit (which includes the AR glasses). The 1,500 members of the company’s Pioneer Developer Program will be the lucky (and patient) recipients of the glasses and the accompanying SDK. I say patient, because this shipment is the culmination of Meta’s original Kickstarter campaign that was funded on June 16, 2013. Its new website also launches today.

Meta is a company worth watching. In short, if you think the future of augmented reality will consist of looking at 3D advertisements with your tablet or relying on Google Glass for a real-time, augmented replay of a task you’re doing (superimposed in the corner of your eye), then you’re wrong.  The future of AR will be something more akin to Meta’s vision — seeing the actual, natural world in front of you through transparent lenses, overlaid with virtual information with which you interact using your hands and voice.

This natural machine approach, as CEO Meron Gribetz describes it, is important because it uses the real world as the focus of the interface — you are looking at the actual world around you in real-time and not looking at enclosed LED screens using cameras, like the Oculus Rift or Gear VR. Also, the AR content you are seeing is in line with the task at hand instead of off in the corner of your vision like Google Glass. Using this natural approach, the real world can still be laden with holograms and controlled with hand gestures or your body, but at its core it’s trying to keep you inside reality and focused straight ahead. You just get extra information while you’re there. 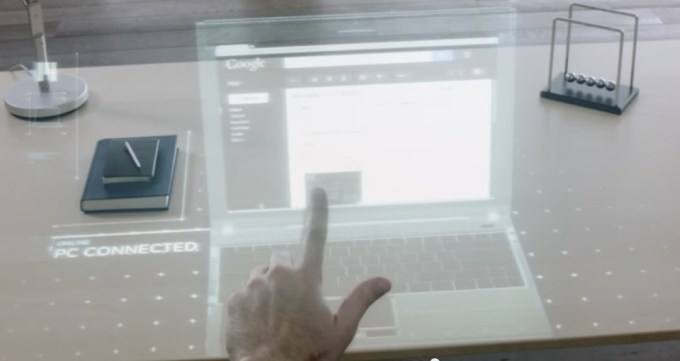 To be fair there are some other companies out there that share this vision for see-through AR, and I’ve seen or covered AR glasses from the likes of Vuzix, Epson, Sony, Lumus and more. But Meta does seem to have a more holistic, almost philosophically passionate view on collaboration, and this is an important distinction. Their objective is to create a better way for people to be able to work together and see the same things, collaborate on the same objects and be present in their work together.

With this shipment we will likely see more AR companies come to market like a few of these charter Meta Pioneer developers (SimX who presented at Disrupt being among them).

In general, whenever I contemplate wearable computing, I run into a conundrum: Do we need more distraction or less distraction? Do we really need any of this stuff? The answer is obviously a resounding “no.” Humans have existed for millions of years with nary a smartwatch, smartphone or set of AR goggles and have done well so far, all things considered.

But one thing we started doing very early on was making tools; it’s part of our collective spirit. We make them to make life easier. So from that standpoint, if you ask me what I think of the Meta 1 Augmented Reality Glasses, my answer would be “Nothing could be more human than an overlay on our complex world.” And that’s why I’m excited about things to come.

Update: One clarification I should make is that this shipment is going to and aimed at developers and prosumers. This is not a consumer shipment. The focus of the Meta 1 Developer Kit is to bring developers tools designed by Meta that enable the creation of their own AR applications and concepts. Meta has also consulted with many of these Pioneer Program developers to help kick off their concepts.