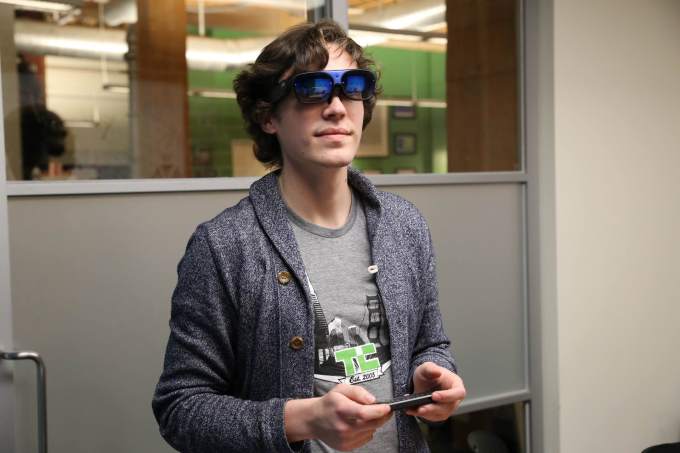 Despite spending my entire time at CES scoping out cool gadgets in virtual reality, augmented reality and wearables, there was still a lot of neat stuff that I missed while in Vegas last week.

One such gadget I missed was a pair of augmented reality glasses from Osterhout Design Group, a San Francisco-based company that’s spent the last six years iterating on AR for military and industrial clients.

At CES, ODG announced that it plans to launch a consumer model of its sixth-generation glasses. ODG VP of Head-Worn tech Nima Shams told me during a demo yesterday that the company wants to give users a “head-worn tablet experience,” but packaged in a more convenient form factor than, say, 3DHead’s awful Oculus Rift knock-off.

In terms of specs, the tablet description isn’t far off. The consumer model is powered by a Snapdragon 805 system-on-a-chip, which frequently appears in flagship phones and tablets from Android OEMs. The current demo unit is running Android Kit Kat, though the final release will sport Lollipop.

The glasses themselves are like Google Glass on steroids. Instead of cramming the processing and battery into one side, the Snapdragon, storage, and 5 MP camera are right up front, with the sides reserved for packing in big ol’ batteries. Underneath the computing hardware but behind the glasses lenses proper are two 720p screens that work in unison to provide stereoscopic 3D. The end result is a pair of glasses that look like something Kanye would wear with one of his more eccentric outfits:

While powered by Android, ODG has created its own software layer to adapt Google’s phone OS for use with glasses. Called “Reticle OS,” the interface is very slimmed down, giving you a single row of your favorite apps on the home screen followed by a folder with the rest of your apps.

I got to play with a few demo apps, and the experience is surprisingly smooth. There were the obvious AR demos (look at this 3D object pop out of this piece of cardboard!), a VR-ish demo where you could watch a 360-degree video by looking around, and even a web browser that loaded pages very quickly and handled exactly as you’d expect with a handheld keyboard with an integrated trackpad.

The experience can feel quite a bit like Google Glass if you drop the brightness, with notifications popping up without totally distracting you. If you up the brightness and connect to a Bluetooth keyboard, it almost feels like having a giant tablet floating in front of you. Some of the apps (email, I’m looking at you) still look a bit too much like traditional tablet/laptop interfaces, and could use a redesign to reduce information density.

You control ODG’s smart glasses with a BlackBerry-like trackpad nub on top of the right arm and standard Android back/menu buttons. The team acknowledges that not everyone wants to swipe on their temple all the time, so each pair of glasses comes with a tiny wearable Bluetooth ring with the same hardware buttons/trackpad and motion sensors that give you the option to move the cursor with gestures. 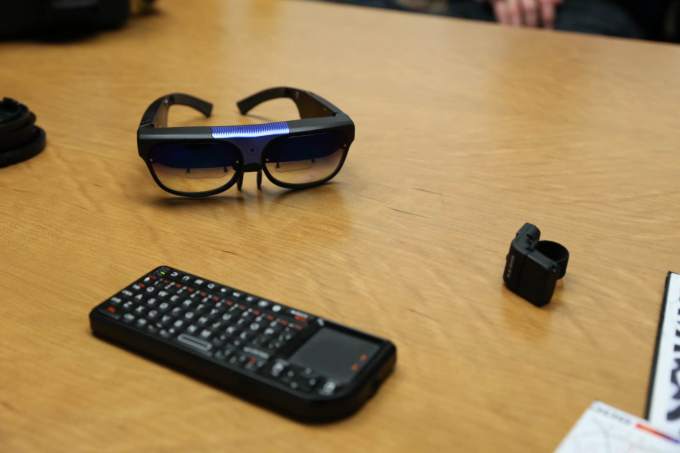 The only way to get anyone to spend as much on a pair of smart glasses as they would on a high-end phone is to give them applications meaningfully better than what they can get on the device already in their pocket.

Being able to enjoy movies and the web “privately” while in transit was the biggest pro Shams brought up during our demo. Looking around on BART (San Francisco’s transit system) and on planes, it doesn’t really seem like people mind staring at their smartphones in public, so I don’t know if that’s the angle ODG should play up when it comes time for their consumer release.

That’s why it’ll be key for ODG to get developers on board to make apps designed specifically for Reticle OS and AR. A full SDK and developer hardware based on the consumer release are coming later this year, though ODG isn’t ready to give a final release date or pricing details (besides “less than $1,000”) just yet.