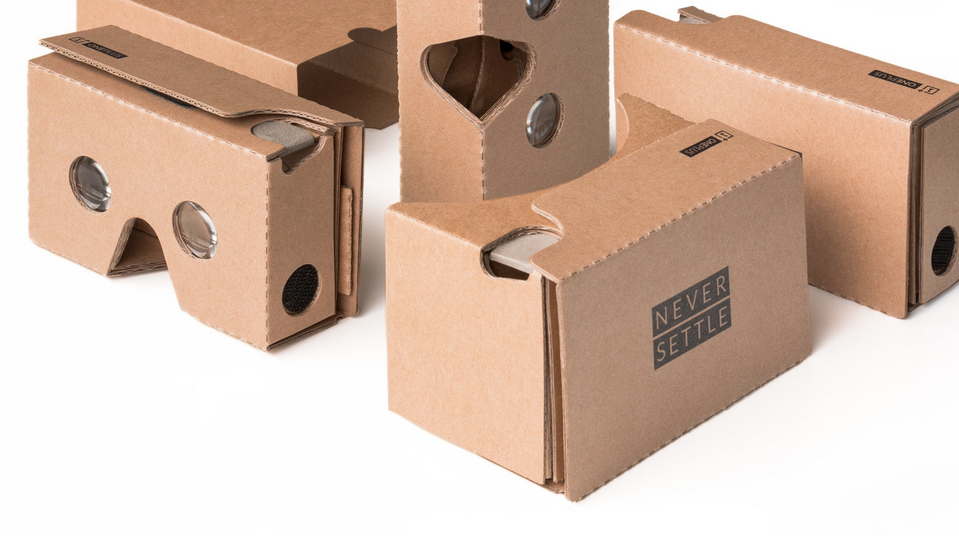 Since about 10 seconds after Google launched its do-it-yourself Cardboard virtual reality headset, other companies have been selling pre-made clones — and Google is totally fine with that.

(Wondering WTF “Cardboard” is? The short version: it’s a virtual reality headset that uses your phone as the brains. Fold the headset together, slip your phone into it, and you’re good to go. It’s like a very, very basic Oculus Rift. Google released it as a side project, then opened it up for others to build upon.)

The catch: many of the clones cost upwards of $20-30 bucks, and that’s before shipping. Paying that much for what is essentially a piece of cardboard can feel a bit silly. Looking to capitalize on this, up-and-coming smartphone manufacturer OnePlus is giving away a ton of Cardboard clones for free — you just pay the shipping.

For all of the orders I’ve seen, the shipping fee comes in at $5.

OnePlus’ clone is based on the latest version of Cardboard (v2.0, which just debuted at Google I/O last month), but they’ve made a few tweaks:

So what’s in it for OnePlus? Why give away something for practically nothing?

“This is not a product; it’s an initiative. We aren’t making any money by offering OnePlus Cardboard. In fact, we are losing money with each one.”

But in the end, it’s a marketing promotion — and one that fits well within the company’s messaging to date.

OnePlus plays the goodwill card and caters to its fanbase like few other new companies have managed, limiting initial device sales to its most devout fans, hashing out how new features will work with its forumgoers, and more.

With this promo, they’re making new fans and getting their branding out there for the cost of a sheet of cardboard and some plastic lenses. When heading off against giants like Samsung and LG, that’s a pretty damned reasonable customer acquisition cost — particularly with OnePlus being just weeks away from debuting its second handset.

You can order one of OnePlus cardboard headsets right over here. If you get a “Sold out” message, try again later — they seem to be releasing these in waves.

Still wondering what the heck this thing is? Here’s a video of me tinkering with the original V1 Google Cardboard: