PayPal, the payments service with 162 million users preparing to separate from e-commerce giant eBay later this year, is announcing an acquisition today to help build out its mobile business targeting physical merchants, and sharpen its focus in competition with other tech payment hopefuls like Apple and Google.

It is buying Paydiant, a startup out of Boston that makes mobile wallet technology. That technology, in turn, powers payment apps for large business like Subway, Harris Teeter supermarkets, Capital One bank, and — perhaps most notably — MCX, a merchant-owned network that is developing a payment app called CurrentC.

CurrentC, you may recall, was in the news last year when it emerged some merchants that were part of MCX — they include large businesses like Walmart, Target, CVS and many others — were building CurrentC as their own way to take on Apple Pay and other solutions.

Terms of the deal are not being disclosed by PayPal and Paydiant but it will include technology, customer relationships and about 70 Paydiant employees. Re/code is reporting that it is a $280 million deal. The acquisition is expected to close in March or April of this year, Paydiant’s CEO Chris Gardner tells me.

Gardner says Paydiant had raised about $42 million in funding from investors that include General Catalyst, Stage 1 and North Bridge.

Although Gardner and Anuj Nayar, PayPal’s senior director of global initiatives, both stress that this acquisition is not an arrow shot across the field at Apple and Google — “Apple Pay and Google make a lot of noise, but we’ve never been competitors,” insists Gardner — you cannot deny that the mobile payments landscape is heating up and there appears to be a kind of landgrab shaping up among the biggest players.

As Apple has finally pulled the trigger on Apple Pay, and the iPhone maker’s entry has been met with so much enthusiasm that it’s become a catalyst for others to get their skates on.

Visa is making acquisitions to expand the kinds of services that it offers; point-of-sale device companies are putting out new Apple-Pay and NFC compatible hardware. And Google is getting serious again about payments.

It has its Android Pay API — which Sundar Pichai gave a namecheck to during a keynote at the Mobile World Congress in Barcelona — and Google also recently purchased technology from Softcard, a joint venture between carriers. That will also give Google a new connection to those carriers and their customers, which will be key to getting more scale for its services.

If Google is focusing on carriers, and Apple has a beautiful but very device specific experience, PayPal is looking for a role as the leading touchpoint with merchants — arguably an area where the others are making headway, too.

This is an important move for the company. As a business, PayPal was built for online commerce, and this is still where the majority of its transactions sit: just under 20% — $46 billion — of its $226 billion in 2014 sales were made on mobile devices, and of that a very small percentage were point-of-sale, physical transactions. Adding Paydiant will bring more point-of-sale volume on to PayPal’s platform, and it will also give PayPal a more established route into tackling more of that large-merchant market, offering them the proposition of developing their own-branded mobile wallets and credit cards alongside other marketing programs like gift cards and loyalty cards.

“With the addition of Paydiant, PayPal becomes an even stronger business partner for merchants,” PayPal president Dan Schulman notes in a blog post announcing the deal.

To date, Gardner tells me that the majority of CurrentC transactions are made using a QR-code system developed by the company, but more generally the platform is device agnostic. And coincidentally, to that end, PayPal today also announced a new Here point-of-sale reader that will let merchants add NFC reading capabilities to take contactless payments. That reader is launching first in the UK and Australia, markets where PayPal and eBay often test things first, before coming to the U.S. later this year. 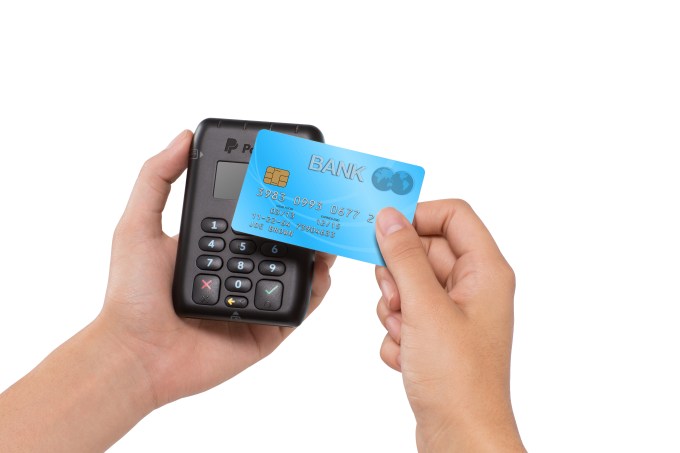 For Paydiant, Gardner says the deal was a no-brainer because it gives its wallet technology significantly more scale and firepower. If that’s the thinking for a larger startup, imagine the proposition for the hundreds of other, and smaller mobile payments and mobile commerce startups out there.

“There will be a lot more consolidation in the space,” says Thomas Husson, an analyst at Forrester. “We will see a lot more bigger players acquiring smaller companies. I wouldn’t be surprised if we see more of these coming.”