Visa announced today that it’s planning to acquire Mountain View-based TrialPay, an e-commerce payment platform which sits in between payments and advertising, providing consumers with an alternative way to pay for items by agreeing to take advantage of another merchant’s offer. For example, in mobile applications, TrialPay allows gamers to unlock premium content by agreeing to sign up for free trials of other services, or download other applications.

Deal terms are not being disclosed, but Visa says the acquisition is expected to close in fiscal Q3 2015.

To date, TrialPay had raised nearly $56 million in outside investment, according to CrunchBase, including a $40 million Series C in 2012 from Index Ventures, Battery Ventures, DFJ Growth, Transmedia Capital, Greylock Partners, DFJ and others.

According to the data published on its website, TrialPay reaches 500 million users, and has a network of 20,000 merchants in 180 countries worldwide, with 3,000 offers available. Some of its better known clients include Disney, Facebook, GAP, NFL, Hulu and EA. 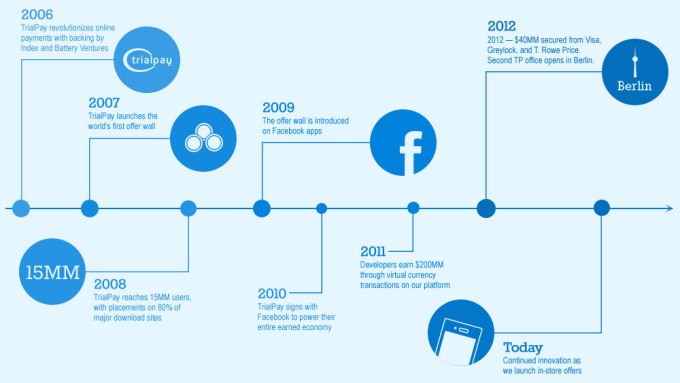 In an interview last year, TrialPay CEO Alex Rampell noted that the service was responsible for tens of millions of transactions for its merchant partners. He also said at the time that the company saw an opportunity to take its processes into the offline world – meaning working with major credit card companies, including not only Visa, but also MasterCard, American Express as well as acquirers and issuers, in order to figure out when consumers were using a credit card offline in order to connect it to the offers made on the TrialPay network.

While originally focused on helping social games monetize through subscription and product offers, similar to then-rivals like Tapjoy, the company began moving in the direction of mobile in 2013. Then, in fall 2014, TrialPay launched a mobile monetization platform called Evergreen, following its licensing deal with Visa, also a TrialPay investor, which gave mobile application developers access to an SDK that included TrialPay’s transactional advertising tools focused on app installs, video ads, and mobile commerce.

The licensing deal represented a close partnership between the two companies, as Visa even brought on a small team from TrialPay at the time to join Visa as full-time employees as it began to integrate TrialPay’s technology into the Visa platform. Visa said then that it licensed the technology because it would help to accelerate the development of Visa’s own loyalty and offers platform – something the company hoped would be a strategic and competitive advantage.

Today’s acquisition announcement includes much of the same reasoning when explaining the motivations behind this latest deal – Visa says now it wants to integrate the TrialPay technology into its existing network, so it can deliver real-time offers to its cardholders, as well as give merchants “more timely and valuable customer insights.”

Visa tells TechCrunch also that TrialPay founder Alastair Rampell has already joined Visa, and Terry Angelos is expected to join with the completion of the acquisition, along with the rest of the 60-person team.