Sitting at the top of the iTunes App Store for the fourth day in a row and counting is Scholly, another one of the many mobile applications that found its way onto the national stage by way of ABC’s popular TV pitch competition Shark Tank. The show now has a history of being able to move the market when it comes to turning apps that would otherwise be also-rans into mobile hits – at least in terms of visibility and downloads, if not user sentiment or long-term success.

Scholly, for example, is being slammed by a number of one- and two-star reviews from consumers who downloaded the app because they saw it on TV and thought it would be useful – especially considering the fight it caused among Shark Tank investors, leading several to walk off the set. But many users soon discovered that the app still had a number of bugs and, in some cases, pointed to outdated information.

In case you missed it, on the most recent episode of Shark Tank, co-founder Christopher Gray introduced his app Scholly as a way for prospective college students to seek out scholarships and grants. The app scours the web for this information and aggregates its results, though in a fairly unadorned user interface. Many complain that the app isn’t really offering much more information than a number of competing websites already do today, and, in fact, the limitations of a mobile interface is actually an inconvenience since the app doesn’t save your place, and you can’t open tabs like you could in a web browser.

In other words, it’s clear that while Shark Tank can drive traffic in droves, it’s not a proven quality filter.

More importantly, perhaps, the exposure that the show provides, while definitely resulting in a sizable bump in app downloads, doesn’t always mean the company will win in the long run.

In fact, when looking back on a number of past apps that have popped up on the show over the years, it’s apparent the results from being on Shark Tank vary beyond their initial boost.

Scan Hangs On Beyond Its Shark Tank Bump, Sells To Snapchat

Scholly is hardly the first to reap the benefits of a national TV appearance on the show, which features investors Mark Cuban, Lori Greiner, Daymond John, Robert Herjavec, Kevin O’Leary and Barbara Corcoran listening to startup pitches and then choosing to pass or invest, often at steep prices.

Following a 2013 appearance from a company called Scan, a QR code scanner, the app shot up to #1 on the App Store’s Utilities list, and climbed to #25 in Paid Apps on iTunes. Before the show, it was ranked #150 Overall, and #5 in Utilities.

The app didn’t earn an investment on the show, but founder Garrett Gee enjoyed the exposure and he actually closed on $7 million the day before the episode aired. (Gee also cleverly “hacked” Shark Tank by using a QR code in his demo that sent users to his website.)

Today, the app is still holding its own following its sale to Snapchat for $14 million in cash, $3 million in restricted stock units and $33 million in Class B common Snapchat stock. It remains a top 10 app in the Utilities category, over a year after its Shark Tank debut. Though it has fallen further in the Overall rankings over the past several months, to keep a top 10 position in any iTunes category is a struggle that being on a TV show alone doesn’t solve. 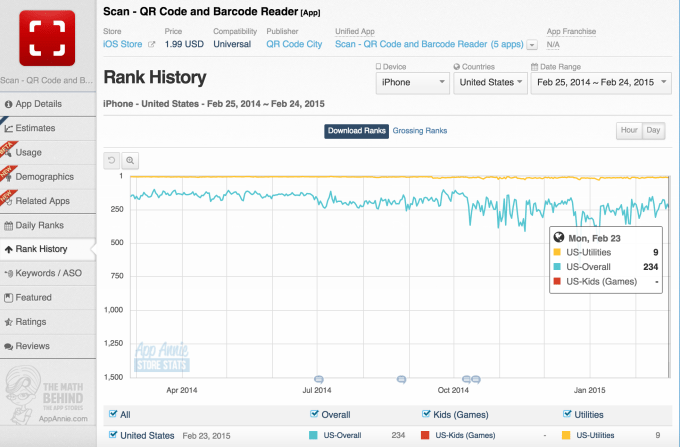 But Even “Hot” Shark Tank App Companies Can Fade In Time

Meanwhile, one of the more popular apps that proved the show’s abilities to push startups into the App Store stratosphere was Cycloramic, a sort of gimmicky but fun app that used the iPhone’s vibration function to turn itself around while taking a 360-degree photo.

As soon as the segment aired, creator Bruno Francois said the app began seeing tens of thousands of downloads in a matter of minutes, and, within the hour, reached 100,000 new installs.

Since its appearance on the tank a year ago, the company released a new version designed for the iPhone 6 whose round edges made its earlier trick where it stood upright and rotated impossible. (The new app uses the iPhone charger for the base instead.)

Remarkably, the Shark Tank-promoted app still remains decently ranked, all things considered. It maintained a position in the top 50 “Photo & Video” category on the App Store all last year and in the beginning of 2015, only more recently dropping below the top 100. 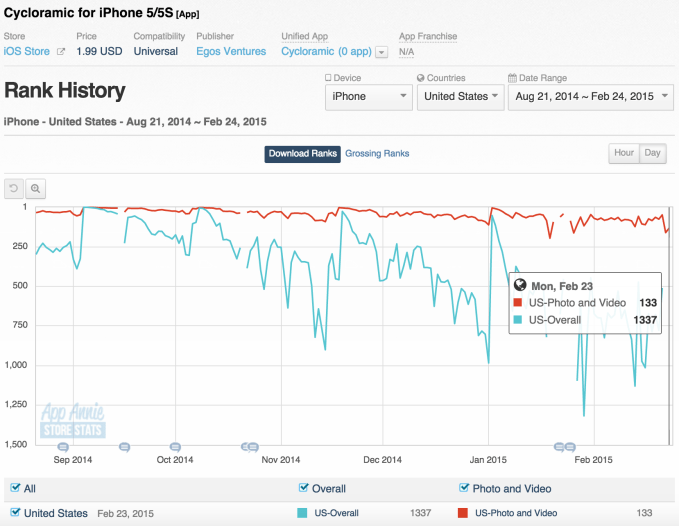 Unfortunately for Cycloramic, however, it seems that Shark Tank investors may have overvalued the company’s potential to move beyond what could end up being a one-hit wonder. Its latest version for the iPhone 6 is not doing as well, ranking #1315 in the “Photo & Video” category these days. 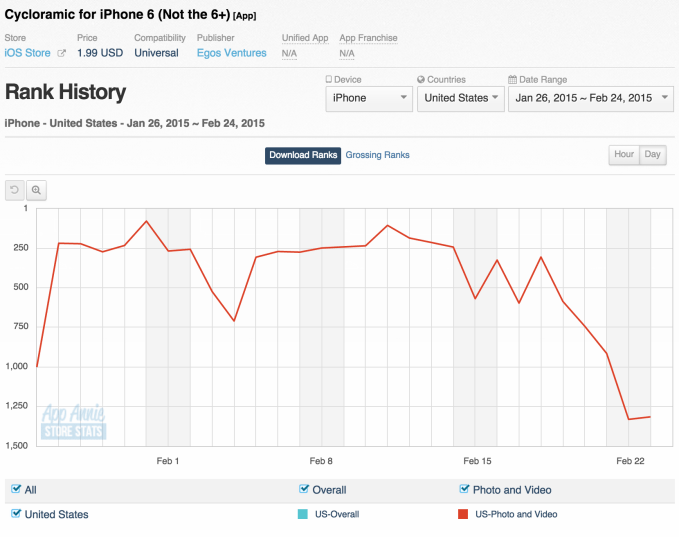 In addition, the company’s spinoff into selfies, with selfie360, is faring little better. (#621 in Social Networking, and not ranked elsewhere – meaning it’s ranked lower than #1,500, according to App Annie’s data).

Another app company that got a bump from the show was VerbalizeIt, a human-powered translation service that popped up on the show in spring 2013. 72 hours after its segment, the app had 20,000 new customers and daily revenue tripled. (The app said yes to an O’Leary investment on the show, but after airing turned him down.)

However, co-founder Ryan Frankel told The WSJ in October 2014 that, despite the national visibility, the app still didn’t hit the numbers it needed to be a consumer success. It instead raised a seed round of $830,000 to move into the enterprise market, the paper noted.

The app has since been pulled from the iTunes App Store. It’s dead.

When Shark Tank Investors Pass, Bump Can Be Minimal

For app makers going on Shark Tank, they don’t have to score a deal – or even be liked by investors – in order to get the initial App Store boost. But it may help sustain the boost, it seems.

For instance, a personal security app called EmergenSee saw hundreds of thousands of downloads in the 12 hours after the show aired, and had to add extra servers to handle the traffic.

The app hit #20 in the Lifestyle category following the show, but crashed in the rankings soon after – indicating that the show’s audience is at least somewhat influenced by investors’ opinion on the matter. While Scholly was fought over by investors, EmergenSee was dismissed – and App Store rankings reflect that sentiment in terms of consumer downloads, too.

(With EmergenSee, investors didn’t care for the app’s business model, and weren’t thrilled with the company’s decision to use outsourced developers. Perhaps the audience agreed?) 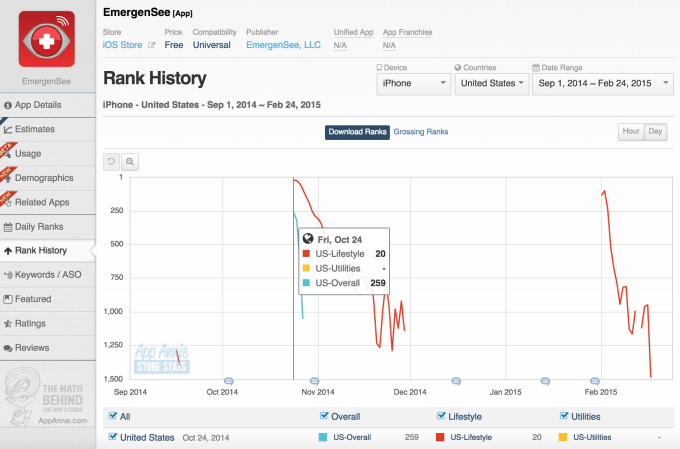 The EmergenSee app is today ranked lower than #1,500 in all categories, says App Annie. In other words, it’s also effectively dead.

The biggest app success story from the show, however, is that of photo book maker Groovebook. The mobile app lets users build super-cheap photo books using photos stored on their mobile phone.

After its TV appearance in January, the app grew to over a million downloads and saw more than 200 million photos uploaded. GrooveBook had acquired over 18,000 subscribers in the 8 months before the show, but then grew its business to 500,000 paid subscribers after the show aired, the company said in a later update.

Groovebook then went on to make history as the first app appearing on Shark Tank to exit to a publicly traded company, when Shutterfly acquired it for $14.5 million in November 2014.

While an exit like this is certainly notable, it’s worth pointing out that Groovebook’s app wasn’t entirely a runaway success. Its Shark Tank debut in January 2014 pushed it nearly into the top 5 in the hyper-competitive “Photo & Video” category on iTunes at first, but throughout the year, the app’s growth fluctuated wildly in the Overall rankings and it floated in and out of the top 100-150 in the “Photo & Video” section – a decent, but not breathtaking, showing. 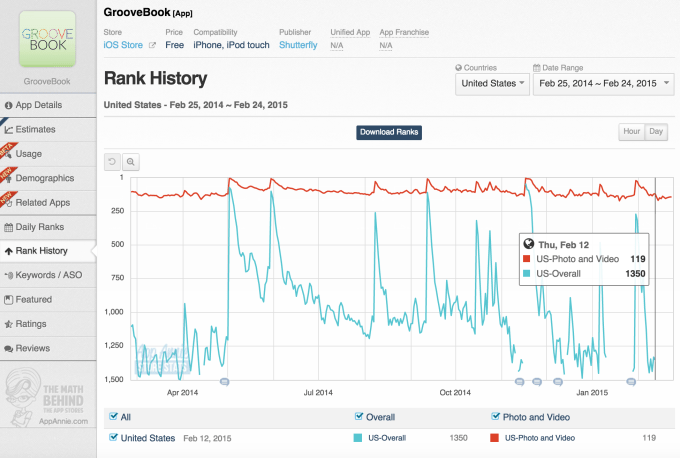 The above are only some of the many apps that have appeared on the show over the years. However, if there’s any larger takeaway from the results of this sampling it’s that the show’s ability to provide exposure is certainly beyond question, but its ability to transform apps from unknowns into lasting businesses is definitely not a given.