Not all e-commerce involves home delivery. Mobile shopping app Curbside, which lets users shop from their phones then pick up their purchases at a local retailer without getting out of their cars, has been growing quickly since its debut last year, and is now processing thousands of orders per week. And today, the company is announcing a rollout to several Best Buy locations in San Jose, San Francisco and elsewhere in the Bay Area.

While many companies, including Amazon, have been focused on speeding up local deliveries, and even offering same-day delivery options for select customers in largely urban markets, others, such as Walmart, have been experimenting with more of a hybrid model when it comes to e-commerce. In Walmart’s case, for example, the company has been testing local pickup options at a handful of stores around the U.S., where customers can shop online then pull up and park while their items are brought out to them.

Similarly, Curbside launched last fall to bring this same type of service to other retailers, starting with 10 Target stores across the greater San Francisco Bay Area, as well as the Westfield Oakridge shopping center in San Jose, where several retailers are already on board. Now the company has inked a deal that will see the service available at local Best Buy stores, too, including two in San Jose (Santana Row and San Jose South), one in San Francisco (Geary Blvd), and another in a still to be determined Bay Area location.

While clearly these expansions are still representative of pilot testing on the part of area retailers, early data indicates the service is resonating with consumers. Over 55% of those who have shopped on Curbside have made a repeat purchase, and the company is now handling hundreds of orders daily. In addition, says founder and CEO Jaron Waldman, growth has continued to be steady and has climbed, even after the holiday shopping season wrapped.

The company found that, initially, the service appealed to young parents who appreciated the convenience of being able to pick up household goods and baby items, like diapers, without having to get their kids out of the car. But over time, the product mix has broadened, and Waldman says consumers are using Curbside for other things, too, including apparel and cosmetics, for example. 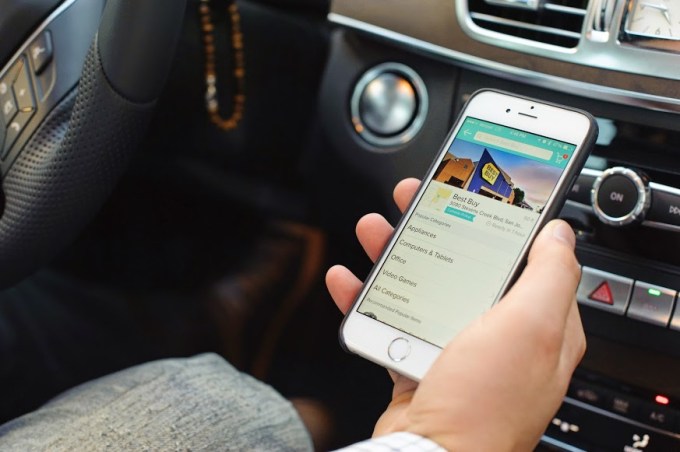 With Best Buy, which already offers an in-store pickup option of its own, shoppers may choose to purchase more high-end items – things they’ve researched online and are ready to now purchase. And dropping by the store to pick them up immediately is a form of instant gratification that traditional e-commerce doesn’t offer. It also saves on delivery charges and fees associated with many of the same-day shopping services.

If the tests with retailers like Target, Best Buy and mall operators go well, the company plans to expand its service to more locations across the Bay Area, and later, to other markets. Waldman also notes that they’re planning for further e-commerce integrations, where Curbside becomes a fulfillment option for retailers on their own checkout pages, in addition to a consumer destination by way of its mobile app. These expansions are currently being discussed with Curbside’s retailers and other potential partners, the CEO says.

The company, which is backed by $8 million in Series A funding, is also differentiating itself from a number of startups today that rely on contractors to fulfill the labor requirements associated with the task at hand, like running deliveries around town, for example. Curbside says the majority of its employees work over 30 hours per week and are paid hourly with benefits. However, in the future, retailers may choose to staff the Curbside locations themselves.

Today, Curbside has grown to 65 retail employees and 25 in its headquarters. The Best Buy locations are available in the app now.