Walmart To Go, the retailer’s on-demand shopping service offering home delivery of general merchandise, including in some cases, groceries, is expanding its test in the Denver market today to also include a local pick-up option. Denver area customers will now be able to order their groceries online, then pick up at a nearby store – without having to set foot inside the store.

Instead, customers will pull up to a designated pick-up spot on the side of the store, as directed. Or, in the case of those stores where a drive-through pharmacy is available, they’ll pick up their groceries from the pharmacy window. Depending on the location, they’ll either dial a phone number or enter an order into a touchscreen kiosk to let Walmart staff know they’ve arrived. Then it’s only a matter of popping the trunk. 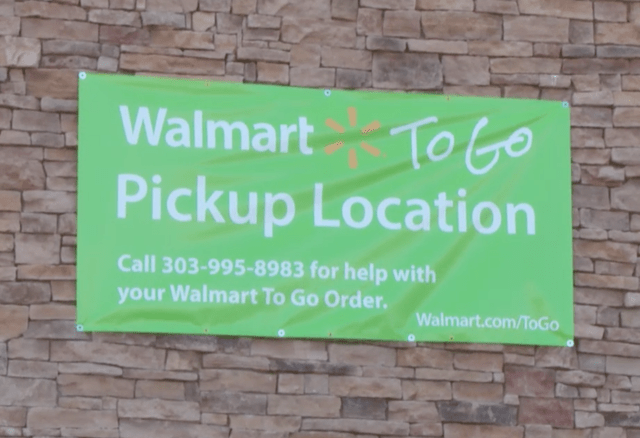 To get started, customers will first place their orders online, and Walmart will call them directly when the order is ready. The idea is that you could effectively “do your grocery shopping” in the morning, or while on your lunch break, then swing by the store on your way home to pick them up.

However, Walmart believes many customers will still park and come into the store, even after placing the order online. This is because, in surveys the retail giant has conducted, 55 percent of shoppers said the idea of grocery pick-up (as opposed to home delivery) appealed to them because it would give them a chance to grab the items they forgot when placing the original online order. While in store, they may also come across other things to buy that weren’t on their list, Walmart hopes.

But to be clear, the local grocery pick-up option is not meant to replace home deliveries, nor is the home grocery delivery experiment being called a bust.

“It’s all about choice,” Walmart’s Director of Public Relations, Ravi Jariwala, explains. The retailer understands customer behavior is shifting, he adds, but the customers are the ones who will dictate what’s most convenient for them.

“At this point, we’re really trying to assess what our customers are gravitating toward, and the good news is that I don’t think this is an either/or [situation],” says Jariwala.

The “Walmart To Go” Suite Of Services

Denver is one of the few areas where Walmart To Go offers home delivery of grocery items, and one of the most recent at that. Grocery delivery arrived in the region just last October – making it the first market outside of Walmart’s e-commerce headquarters in Silicon Valley to receive access to the service. To date, “hundreds” of grocery deliveries have been processed through Walmart To Go in Denver, and the service has been rated by 90 percent of users as 4 or 5 out of 5 in follow-up customer surveys. 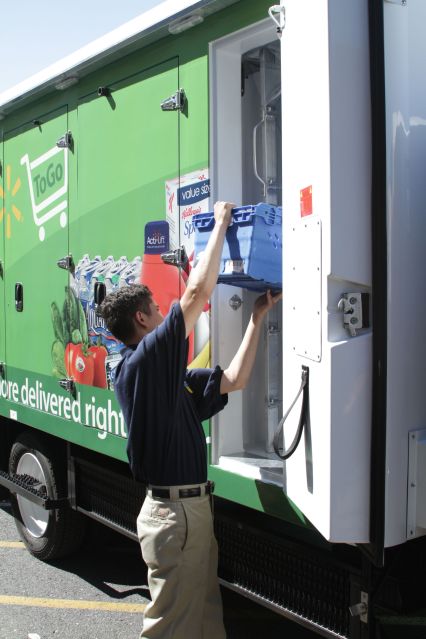 The retailer has also been testing grocery delivery in San Jose and San Francisco since 2011 where thousands of customers and orders have been placed to date. There, the company is in the process of expanding its delivery fleet from 7 to 10 trucks.

Meanwhile, Walmart has been testing same-day delivery of general merchandise in Northern Virginia (outside D.C.), Philadelphia, and Minneapolis, in addition to San Jose and San Francisco as of October 2012.

All the various services – same-day delivery, grocery delivery, and now in-store grocery pickup – are offered under the “Walmart To Go” brand, which can be a bit confusing.

And to further muddy the waters, Walmart has offered a “site-to-store” service, too, which lets customers shop online, then pick up at their local store. In some cases, those pick-ups can also be same-day when items are in stock. This particular service has been available nationwide since 2007, which gives Walmart extensive experience in managing the operational side of local pick-ups, at least. 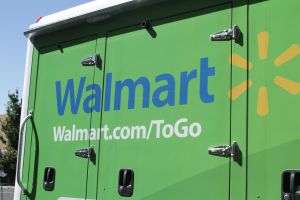 Walmart has to hire and train “Walmart To Go” associates who handle picking and bagging the items, which are then held in the back of the store and kept cold if necessary for local pick-ups, as well as drivers for the home deliveries.

Though Amazon has been eating away at Walmart on the e-commerce front, Walmart’s competitive advantage when it comes to pick-ups and deliveries are the locations of its stores. Unlike Amazon, whose warehouses are situated well for its e-commerce business, two-thirds of the U.S. population is within 5 miles of one of Walmart’s 4,100 U.S. stores, which means the company has more flexibility in offering both pickups and deliveries alike.

For now, Walmart’s home delivery service is significantly cheaper than competitor Amazon Fresh, which is available in L.A., San Francisco, and Seattle, and costs customers $299 annually. Walmart charges only $5-$7 per order. Both services have minimum orders (Walmart’s is $30; Amazon’s is $35).

Of course, both companies are taking a loss on these experiments while they test. The question for now is which option – or as it may turn out, which suite of options – can reach profitability?

Grocery pick-up in Denver is live now in 11 stores.