With the quarterly numbers now in from smartphone leaders Samsung and Apple, the analysts at Strategy Analytics have published their latest figures on how the overall market performed for the last quarter of the year and 2014 overall. In short, it has been a milestone year. Globally we have now passed the 1 billion mark for annual smartphone shipments, with 1.28 billion devices in total passing from OEMs to retailers and carriers for sale, and of that, Android-based smartphones continued their collective domination, alone accounting for more than 1 billion handsets.

This makes Android the first platform to have barrelled through the 1 billion mark for shipments, working out to 81% of the whole market. Meanwhile, Apple accounted for 15% of the market in 2014 on total shipments of 193 million units.

Strategy Analytics does not break out which brands are leading in that race in this report (except for Apple, as the only company making its own devices), but in some earlier research, it put Apple nearly level with Samsung in terms of numbers shipped in the last quarter, with 74.5 million devices each, for 19.6% of the market apiece — a big leap for Apple that resulted from strong sales of its new devices, as well as a larger rising tide of interest in older models that were getting priced more keenly.

IDC has also published figures that put the two nearly level, with Samsung just ahead at 75.1 million for the last quarter, and Apple at 74.5 million, with Lenovo, Huawei and Xiaomi rounding out the top-five. Notably, Samsung was the only vendor of the top five to see its market share decline: 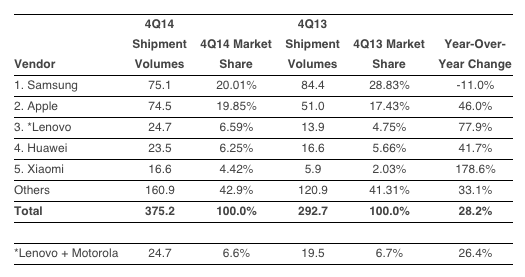 Microsoft, meanwhile, saw relatively little change in its own market share — it’s holding at a paltry 3% — but at least it is in line with overall growth. In unit terms, shipments of Windows Devices in 2014 totalled just under 39 million units, up by 3 million on a year ago.

Drilling down for the quarter, you can see the effect of Apple’s new iPhone models, which have helped the company reach record-breaking sales and pull in ridiculously high, record-breaking profit of $18.04 billion. Apple’s 74.5 million iPhones in Q4 (which Apple reports as Q1) was 23.5 million more devices than a year ago. For a company that has been looking increasingly niche (if also increasingly lucrative when you consider profit), this was an impressive achievement. 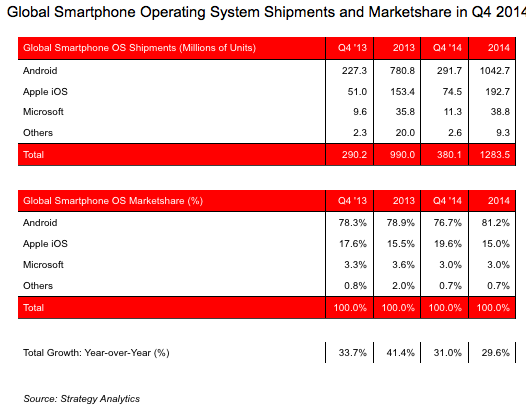 With growth in general now happening largely in emerging markets — mature markets like the U.S. and UK now saturated and therefore expanding more slowly — it’s markets like Brazil and Asia that all eyes continue to focus.

“Global smartphone shipments grew 30 percent annually from 1.0 billion units in 2013 to a record 1.3 billion in 2014. Emerging markets, such as China and Indonesia, drove the industry’s growth last year and they will continue to do so through 2015,” writes Linda Sui, director at Strategy Analytics. That’s an area that Microsoft has yet to figure out how to capture.