It looks like making larger screen smartphones was a good decision from Apple. Fresh off a monster earnings report — including the largest profit of any corporate company in history — Apple sold as many phones as Samsung in the final quarter of 2014.

That’s according to the latest report from analyst house Strategy Analytics, which puts Apple and Samsung jointly top of the pile in Q4 2014 with 74.5 million shipments, that’s 19.6 percent of the market each. 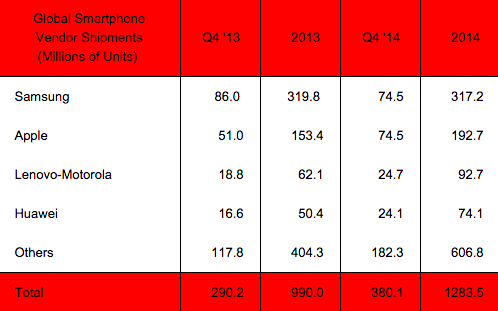 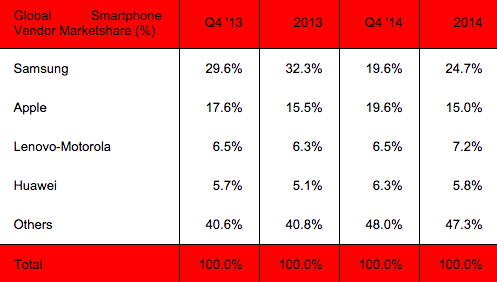 There are a few important things to take away from these findings.

Firstly, Samsung’s share of the market has varied pretty wildly and, of concern, will be the fact that its share of sales in Q4 dropped by 10 percent year-on-year in Q4 2014 despite the fact that Apple’s only increased by two percent.

That clearly illustrates that Samsung’s biggest competitor isn’t Apple, but instead other players with a new breed of competitively priced yet quality smartphones.

Apple’s new large screened phones close down some of the differentiating factors Samsung once enjoyed and squeeze it at the top end of the market, but the low-end, where Xiaomi (in China), Motorola and others are releasing well-branded and quality phones, seems to be biting it more.

Secondly, for Apple to match Samsung on sales is hugely significant.

Since it only produces high-end phones, Apple has traditionally sold fewer devices than Samsung. But Q4 2014 was the launch quarter for the iPhone 6 and iPhone Plus, which explains the company’s sales surge — particularly in China, where it topped the charts on sales for the first quarter ever.

The real test is to come. iPhones sales will drop after launch, that is inevitable, but can they remain high even as Samsung launches its latest flagship in the first quarter, as is traditional for its Galaxy S range.

And finally, marketshare and sales are just one lens through which to view the business.

The contrasting financial performances of Samsung — which ‘won’ on units sold, but recorded its lowest annual profit for three years — and Apple — the ‘runner-up’ which set corporate profit records — demonstrates that in clear terms.

Apple’s focus on a small portfolio of high-end phones means that its average selling price and thus profit margin on each product is considerably higher than that of its Korean rival. That makes their raw sales figures somewhat of an Apple to Oranges comparison.