Do you need another messaging app? One that does GIFs? Sure, why not?! You have room on page 10 of your “chat apps” folder of your iPhone, right? Great! Introducing the latest contender vying for the messaging app throne: Dasher, a new social app backed by $1.25 million in seed funding from Lerer Ventures, Venrock and other angel investors.

Boyes says the idea initially came to him while at Gilt, when he began researching new messaging services for use in the company, and came back disappointed with the current options.

“Everyone is trying to build a better SMS – delivering the same type of content in slightly different ways, but it’s all the same stuff,” he laments. “You’re sending text, you’re sending an image. Maybe an app tries to differentiate by having a better group experience, or sending a sticker, but you reach a low ceiling pretty quickly,” Boyes says.

Initially, the idea was to create a better messaging platform for use in the enterprise, but the team quickly found that the more they used what they were building, the more they were loving it. So they decided to make Dasher a consumer-facing app instead.

As for what makes Dasher different, it’s a focus on supporting other types of content beyond just text and photos.

Oh, and yes – GIFs. The GIF feature is fun – you can just type in a hashtag, and Dasher will automatically include a GIF with your message thanks to integration with online GIF resource Giphy. 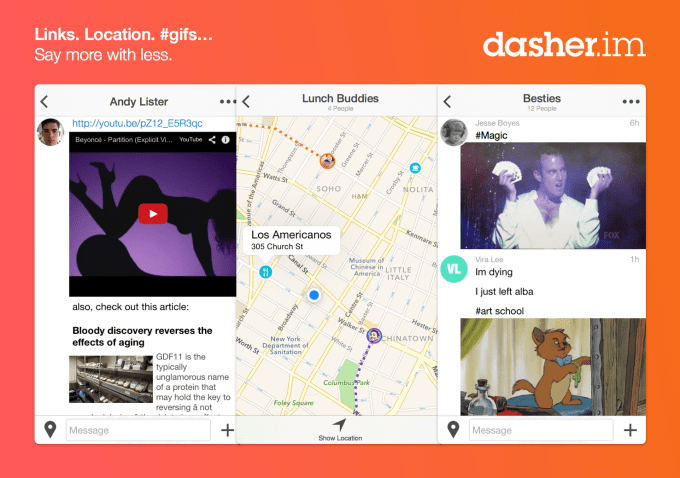 Users can also edit and delete messages, which gives them more control over the messaging experience, and they can share their location with friends through an “On My Way” feature. With this, Dasher will track your location over the next hour (or until you stop it), alerting friends to your current progress along your route. (Note that a similar location-sharing feature is already built into iOS 8, Apple’s soon-to-be released mobile operating system upgrade. And there, you can share your location for other time intervals as well, like “until end of day,” or “indefinitely.”)

While its features make Dasher a more robust mobile messaging app compared with several of its competitors, it’s not the first to come up with the idea of providing richer communications. Messaging app Invi, backed by Li Ka-shing’s Horizons Ventures, Ashton Kutcher and others, is also focused on “rich media messaging,” while iOS app Emu includes a built-in assistant, embedded content, and location-sharing. Neither have yet become runaway hits, despite their feature sets.

The goal for Dasher, then, like many others now arriving on this crowded scene, is not only how to differentiate itself from the crowd, but how to get users to give it a try. In Dasher’s case today, the only mechanism for inviting friends is an SMS invite process (which thankfully is not automated spam). But there’s no built-in Facebook friend finder for now, or other tools to import a social graph from elsewhere.

But Dasher, like another messaging app called Hipe which also recently debuted, plans to turn to the web to help entice new users. Soon, Dasher users will be able to send links to friends which they can view online, even if they’re not a Dasher app user. The web functionality will go live in a few weeks, while an Android version of Dasher is due out this summer.