A new mobile messaging app called Hipe, which lets users share GIFs, videos, or image overlays and a short amount of text, has introduced a twist on ephemeral messaging which turns replying to conversations into something of a game. In Hipe, friends only have 99 seconds to respond to a message after reading it, or otherwise the content disappears and the conversation is gone.

The company says the feature is meant to help reduce the “awkward silences” that occur when you’re having these sorts of digital conversations. Of course, that’s not entirely true, as Hipe is only shifting the awkward silence from the middle of the conversation to the beginning – that is, users who don’t have time to respond will likely just leave the message sitting there unread until they’re able to chat. 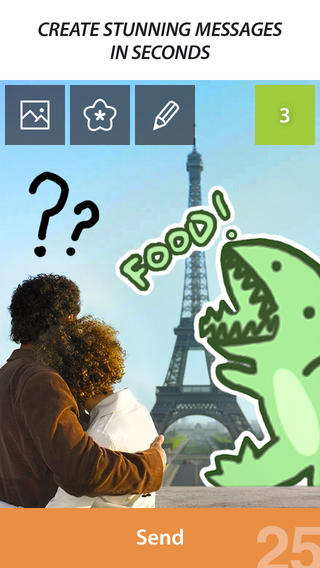 Still, it’s an interesting trick in a crowded mobile messaging and social networking market where even companies like Facebook are now leveraging psychological “hacks” to keep users engaged. For example, in Facebook’s new photo-sharing app Slingshot, you can’t view a friend’s photo until you send one in return – a workflow designed to pique a user’s curiosity enough to turn them into conversation participants.

“Hipe can not only help you to increase the number of openings, but it makes it easier to start the conversation and answer your friends,” explains company representative Ekaterina Gogoladze.

She also notes that being able to reply with images and GIFs can make conversing easier, since sometimes friends just want to check in with each other, but may not have much to actually say.

The Russian team at Hipe is led by Ilya Zudin, also the co-founder of We Heart Pics (whose name is similar to U.S. social network We Heart It, but is instead focused on personal image sharing and editing). The new Hipe app soft-launched in February, and grew its user base to 30,000 in the months since, despite having not yet made a formal announcement about its debut. Today, the messaging app sees weekly retention rates over 50% and the team says it’s currently focused on growing that audience further.

With the new release, out now, Hipe has added a “Public” section offering a number of images to choose from instead of users having to go out and seek their own. This makes getting started with Hipe much easier. Also this week, the company is introducing a browser add-on that will grab any GIF from the web (or stored locally on your computer), then let you send that in a message directly from the browser itself. 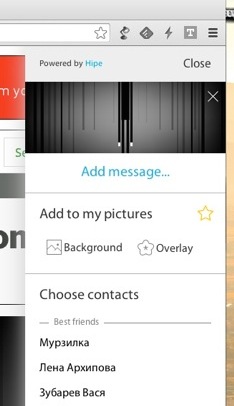 In addition to GIFs and images/overlays, Hipe also supports 10-seconds long, Vine-like looping videos as well as group conversations. Messages can also be shared out to social networks, like Twitter or Facebook.

Another handy feature is the ability to send a Hipe message to any contact – even if they’re not yet using the app. This is a typical pain point for new mobile messaging applications, so it’s worth mentioning this clever workaround. These recipients will instead be directed (by way of SMS) to a website where they’ll be able to both view the message and respond.

Hipe (like We Heart Pics before it) is backed by Russian fund IMI.VC, which has provided an undisclosed amount of seed funding. The 9-person team is now relocating to Lithuania in order to improve Hipe’s European and global presence and build relationships, we’re told.

Hipe is a free download on iTunes and Google Play.