Emu, a new mobile messaging application exiting from beta today, is not just another text messaging alternative – it’s a full-fledged mobile assistant allowing you to schedule appointments, share your location, set reminders, get movie showtimes or buy tickets, reserve a table, and more, thanks to an artificial intelligence engine that understands the context of your messages in order to help you take action upon them.

Also notable is the team behind this app’s creation. Co-founder and CEO Gummi Hafsteinsson’s background in AI and mobile, has seen him working in senior roles at a number of high-profile tech companies, including Google where he worked on Google Maps for mobile and voice search before switching to a startup called Siri. Yes, that Siri. Following Apple’s acquisition, he helped to bring the assistant to the iPhone.

Meanwhile, co-founder and chief product officer Dave Feldman’s user experience, design and product management background has found him working at Yahoo, Microsoft, and AOL, where he – full disclosure – led the TechCrunch redesign back in 2011. (This was just before I joined, however, so we had never met.) He also later became an entrepreneur-in-residence at CrunchFund, the firm from TechCrunch founder Michael Arrington.

Hafsteinsson tells us that the inspiration for Emu came from his prior work on Siri. “I felt that you kind of had to engage Siri all the time, and I wanted to create an assistant that was more in the background and proactive,” he says, describing Emu as something of a “Google Now-like” concept, in that it looks at a lot of data, then chimes in when it knows it can help you. 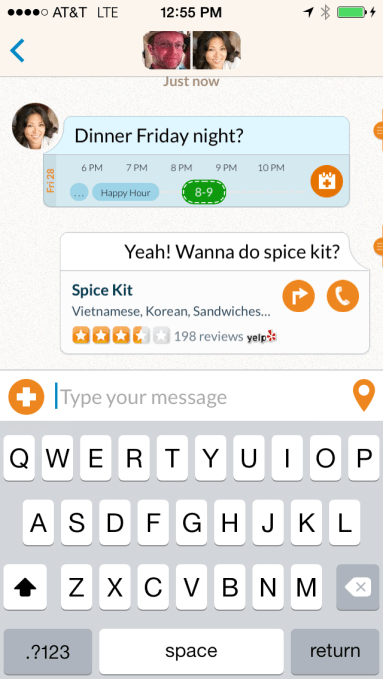 Both co-founders had been toying with this idea of a better mobile assistant before teaming up on Emu – Hafsteinsson with a smart notepad/task application, and Feldman with an email and calendaring plug-in. But while both of the ideas were interesting, they realized they wanted to do something bigger and that didn’t get relegated to the sidelines of people’s lives, Feldman explains.

“Communication lives at the very center of everything we do,” he says. “We wanted to do something that’s right where the action is, and that’s how we got to messaging.”

With Emu, the idea is to make messaging more efficient by saving you the step of having to copy and paste text while switching from one application to the next in order to perform basic tasks. For example, if you message a friend about a lunch date, Emu offers contextual information, including a snapshot of your calendar, the restaurant’s location, Yelp rating and OpenTable reservations, if available.

You can then tap on an orange calendar button to create the event on your iPhone’s calendar, or tap other buttons to call the restaurant or get directions in Maps. 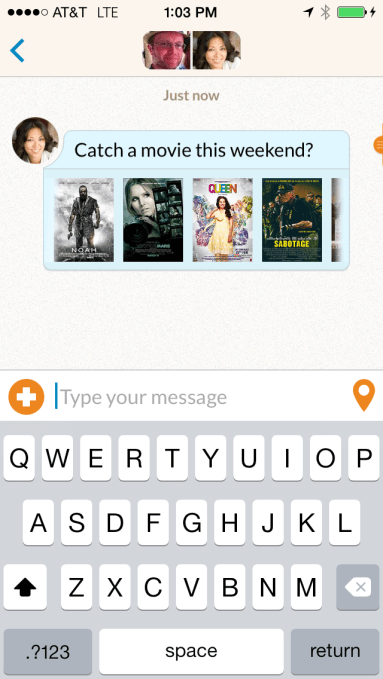 Emu can also bring up a list of movies playing near your house, when you’re discussing movies, or a specific movie when that title is mentioned in a message. You can tap to get more information on the movie and showtimes, and soon, buy tickets.

The app will also automatically reply to incoming messages while you’re driving, so people will know why you’re not immediately available, and it lets you push anywhere in the message stream to dictate a response while on the go, instead of having you fumble to find the small microphone button on the iPhone’s keyboard. A handy “snooze” function on messages,is available too, which turns a message into a reminder you can activate based on when you arrive or leave a particular location. Initially, these are time-based notifications, but Emu will learn your “home” and “work” addresses in around a day or so, the company says.

With a variety of messaging pain points covered at launch, the team will now focus on bringing in that contextual information earlier in the messaging process, so it can do things like suggest restaurants or check your schedule during the compose experience, for example.

On Leaving Android & What’s Next

You may recall that Emu first arrived on mobile as an Android application last fall, before making the move to iPhone. Today, however, the Android app is gone. According to the co-founders, although on Android they had the ability to make their app the default messaging client, they found that building on top of SMS on Android was not the “slam dunk” they first believed.

“We were finding Android in general to be a slower platform to move on. There’s more time spent dealing with fragmentation bugs. There’s more time spent dealing with testing and debugging, and we would rather spend that time building new functionality,” says Feldman. Plus, SMS and MMS are aging protocols, and they ended up spending a lot of time “fighting fires in the plumbing” instead of “building cool stuff,” he adds. 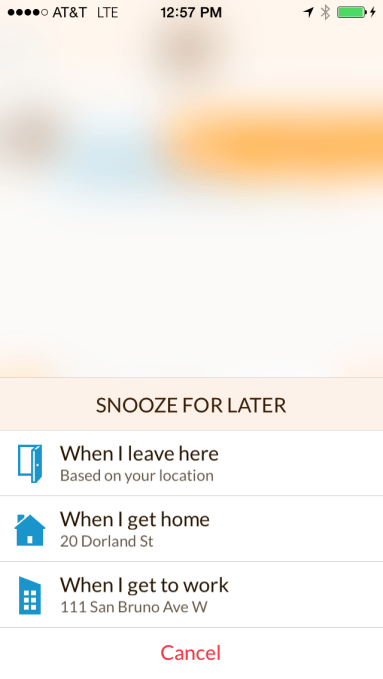 Eventually, they may return to the platform, but for now the focus is on developing the product further and growing a user base.
Of course, a messaging client, no matter how innovative, still faces a tough competitive landscape today amid a sea of mobile messaging apps, all clamoring for a spot on your iPhone’s homescreen. And at the end of the day, the app is only as useful as the number of friends who end up joining – otherwise, you’re left sending out begging invites to friends who still just want to text.  (It’s enough to actually make you hope Apple snaps up Emu and simply adds everything they built to iMessage instead.)

The iOS app, now exiting beta, is a free download here on iTunes.