There have been a lot of murmurs that Amazon would turn on a new music-streaming service this week, and it looks like that’s just what it quietly did a little while ago. A link to Amazon Prime Music, if you are an Amazon Prime subscriber that is, now takes you to a page heavy on playlists, promising over 1 million songs ready for your streaming pleasure, on top of the downloading service that Amazon already offered.

And Amazon has also relaunched its mobile app on iOS with a new name: It’s now called Amazon Music instead of Amazon Cloud Player, which now also features access to Amazon Prime Music.

But unless Amazon is going to add more features before an official unveiling, I’m not sure that what we’re seeing right now is quite a Spotify killer. The service as it is appears to be missing the most current releases; and you have to go through several steps, including adding music to your library, before you can actually stream tracks. On a search results page, you still get the option to listen to an excerpt of a track. 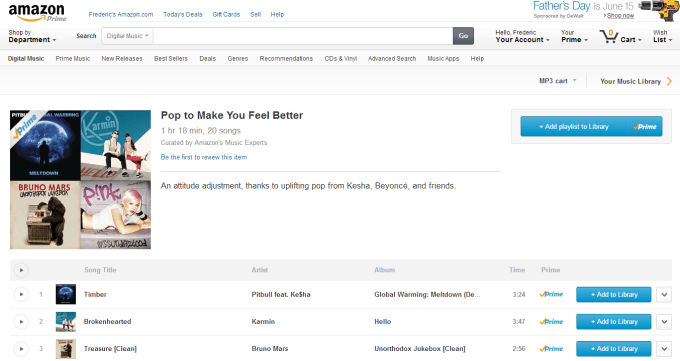 It’s hard to tell who is the target audience for Amazon’s service. If it’s a consumer mass market play, there are still some big gaps. For example, consider current hits. Out of the top 10 of the Billboard Hot 100, nine songs are not available for streaming at the moment, although Fancy from Izzy Azalea can be purchased and downloaded.

And there is also a big gap — a Universal-sized gap. As the NYT and others reported, the service right now does not appear to offer hits (six months old or otherwise) from artists represented by that label. A quick search for Molotov, for example, brings up only purchasing options, no streaming.

(The NYT reports that the service is a culmination of a six-month-long negotiating process with music labels, with a lot of tension specifically over financial terms. For one-year rights to music, Amazon offered smaller labels a share of a $5 million royalty pool, with Amazon setting the proportions based on market share. Bigger labels were offered a $25 million pool, the NYT said. )

But hey! You can stream the greatest hits from Air Supply!

“From what I’ve found so far, the only artists I like for whom they have good coverage are Dave Matthews Band and Pearl Jam,” one poster notes on Hacker News. “So I guess you’re in luck if you love the ’90s.”

In all, there appear to be around 90,000 albums listed right now as options for streaming, working out roughly to the 1 million tracks Amazon promises. As a point of comparison, Spotify has around 20 million songs in its catalog.

This could be one reason that Amazon is heavily promoting its streamed playlists, which it says number in the hundreds. In a selection curated (read: pre-selected) by Amazon, the user may overlook what is lacking.

Similarly, there is also some logic to why Amazon is forcing users through an Ikea-like check-out maze before they can consume their streamed selections. This way, it can offer users a single place where they can listen to streaming alongside tracks that they downloaded. The catalog of songs you can download is bigger, and therefore it can complement the streaming catalog.

In other words, Amazon appears to be trying to make lemonade from its lemons.

My colleague Fred points out another possible reason for why Amazon is not letting people stream directly from the page where they first find a track: It may have something to do with the massive technical debt Amazon has incurred over the years, he says. “Making even small changes to those pages would probably break a million things.”

The timing for Amazon turning on the service is key. It comes after the e-commerce giant recently upped the price on Prime subscriptions — which offers video streaming, free shipping for physical goods and other extras for loyal Amazonians — to $99; and a week before the company is widely expected to unveil its first foray into smartphones. 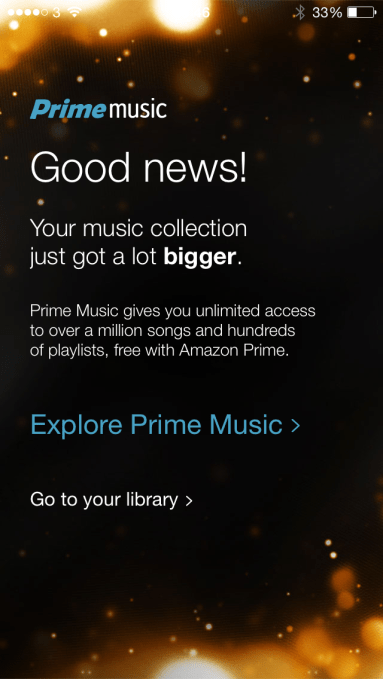 The iOS app, meanwhile, gives you the same option to select and add tracks to your library, although at least on iOS you still need to separately navigate to the library in order to play them, as you do on the web.

So far I have not yet seen the same Amazon Music app appear on Google Play (although in the UK Google is heavily promoting its own music-streaming service on the Play homepage). What it does have here is Amazon MP3, updated June 11 but without any apparent reference to Prime Music.

Amazon says that Kindle Fire HD/HDX devices will get Prime Music in an automatic, over-the-air update. It will be interesting to see whether Amazon makes the user experience a little less bumpy for its own devices — be they Kindle tablets or their (alleged) smartphones.

Despite whatever Prime Music shortcomings there may be, there is still a huge opportunity here for Amazon, one that it would have had to jump into sooner or later.

The company wants to be the go-to place for how people purchase and consume all digital media, and the fact that Amazon didn’t have a streaming music service there to complement its downloads and other streaming products like video was a distinct hole.

On the other hand, the company has a big (“prime,” you could say) opportunity for itself to pick up more loyal users. Amazon says that today it has over 244 million “active customer accounts,” defined as people who have used the service in the last 12 months. But it’s estimated to have only 20 million Prime users. The more sweeteners they add to Prime, the more attractive it will become to those hundreds of millions who are not already giving Amazon a steady $100 each year before they’ve even bought anything.  Music streaming is a sweetener.

And remember, Spotify, the biggest of the music-streaming companies, has 10 million paying users: the bar here for becoming the “leader” is not that high. You might also argue that in fact by launching streaming music, Amazon has instantly become the world’s biggest streaming music company by paid users.

Lastly, on a mass-market level, you could see how Prime Music, minimum viable product as it might appear to tech people or big music fans, may actually be just enough for mass market users. I’m talking here about people who are not early adopters already paying Spotify or another music-streaming company for a service, but quite like the idea of having some easy-to-access, ad-free music-streaming option rolled in with a bunch of other media offerings.