As the music streaming market continues to heat up, Spotify has released new user numbers today that solidify its position at the front of the pack: it has now passed 40 million active users, with 10 million of them paying subscribers across the 56 markets where it now offers music services.

Those numbers put it well ahead of the other players in the streaming music space such as Beats Music, Deezer and Rdio. Beats Music — which is reportedly set to be taken over by Apple as part of the iPhone makers’ (still unconfirmed) acquisition of Beats Electronics for $3.2 billion — apparently only clocked up subscriber numbers in the “low six figures” as of April 2014, some 100 days into the launch of Beats Music, a service created out of the acquired assets of MOG.

But it’s also a sign that as Spotify continues to grow, picking up users rapidly may become a bit more tricky.

A year ago, Spotify was active in 20 markets — meaning that while its footprint has more than doubled in terms of active countries, its user base and the number of paying users have not. 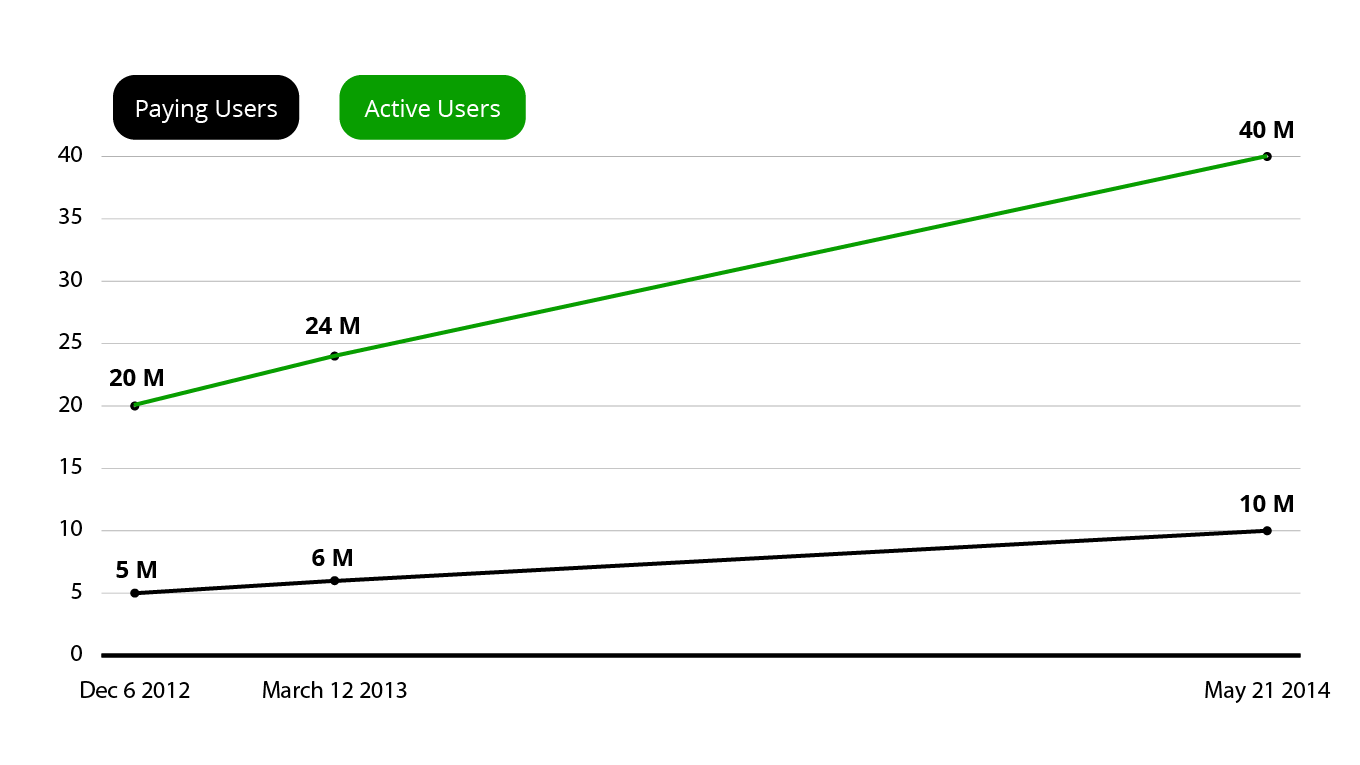 “We’ve had an amazing year, growing from 20 markets to 56 as people from around the world embrace streaming music. 10 million subscribers is an important milestone for both Spotify and the entire music industry,” said Daniel Ek, CEO and Founder, Spotify, in a statement. “We’re widening our lead in the digital music space and will continue to focus on getting everyone in the world to listen to more music.”

The pace of Spotify’s growth, along with the economics of its business model, have served it very well up to now. The company has raised over $500 million in private funding, making it one of the most highly valued startups around at the moment — valued at around $4 billion, according to one estimate after it’s last round of $250 million.

What will be interesting to see is how those metrics and Spotify’s bigger trajectory play out over the next year.

Spotify has been eyeing up an IPO this autumn, according to reports, which could see the company needing to disclose and explain its numbers in a more public arena than it has had up to now. The company has yet to confirm the date or even the IPO plans.

In the meantime, it has been very focused on continuing to scale its business.

There is a two-fold reason for that. Increased traffic on its service means better revenues for its ad-based streaming; but it increases the likelihood of picking up more premium, paying users.

The company has also been building out more partnerships with carriers as a way of bringing on more paying users. One notable, recent deal on that front has been a partnership with Sprint to bundle Spotify with its “Framily” plan, a rival to the Beats Music deal offered by AT&T.

Spotify is also, as we wrote about yesterday, dipping its toes into B2B services, as an investor in a startup called Soundtrack Your Brand, co-founded by a Spotify alum and a co-founder of Beats Music, that will be selling the service as a premium subscription for bars, restaurants and other public venues.

Other stats that Spotify unveiled today point to how it’s continue to push the idea of more engagement on its site — a place where people return regularly and stay for extended periods of time. The company says that since 2008 there have been more than 1.5 billion playlists created, with 5 million getting made or edited daily.

It’s also given the lowdown on what’s actually getting the most traffic on the site, which is interesting just on the level of music interest but also a kind of hat-tip to what the company holds in terms of user data on music sentiment (another key area for companies like Spotify to monetize longer term). Eminem is the most streamed artist of all time, while Rihanna is the most-streamed female artist and David Guetta is the most streamed male artist. Not sure if that makes Eminem post-gender or considered as a collective? Anyway, Katy Perry makes it in also as the second-most popular female.

Guetta also gets the social media gong: he has the most followers with more than 5 million.

The most streamed song is “Wake Me Up” from Avicii: over 235 million streams.