As questions continue to swirl around just how well artists get paid through streaming music services like Spotify — and what they can do to improve that — Nielsen today released numbers that attest to how streamed music is rising against a decline in music sales. In the first six months of 2013, streaming music was up by 24% to nearly 51 billion streams, while overall sales of albums and track equivalents were down by 4.6% over a year ago, and are now at 210 million units. And, as a sign of what a strong role video is playing in the streaming game, the most popular track — by a very long shot — was Harlem Shake, the Baauer track that became the basis of a viral video free-for-all, with everyone and their mothers posting their own versions to YouTube to feed the meme.

In the six months to June 30, Harlem Shake was streamed 438 million times, with the next-closest contender Thrift Shop from Macklemore and Ryan Lewis at 187 million streams. Those sub-billion numbers also point to how long-tail streaming is as a whole. 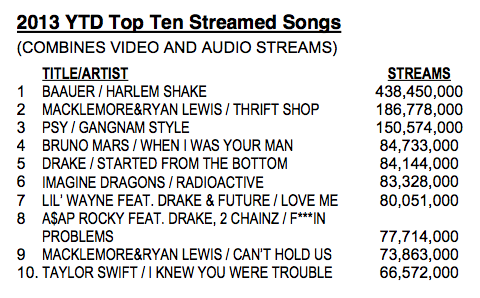 Even as streaming takes more music and mindshare among consumers, the overall picture for digital continues to remain a counterpoint to big declines in CD sales. While CD sales were down by 14.2% to 78.2 million units, digital sales were up 6.3% to 60.8 million units. Nielsen SoundScan and Nielsen BDS, the two parts of the analyst group that compile the regular semi-annual report, note that this works out to digital albums now at 43% of all album sales — up on the 38% figure a year ago, but actually down compared to the figures released by Nielsen six months ago, when digital took a 56% share of all sales.

Perhaps more directly impacted by the rise in streaming is the single-track digital download market — a sign of why companies like Apple, traditionally focused on downloads, are doing more in streaming services. Single-track downloads are down by 2.3% to 682 million (and remember: this is in a period when there were 51 billion streams).

“Overall sales are down slightly in the first half of 2013, but there continues to be encouraging growth in digital album sales,” writes David Bakula, SVP Nielsen Entertainment. But it’s not all bleak for physical sales. Vinyl is still hanging in there and growing, albeit more as a niche/novelty business at this point. There were 2.9 million vinyl albums sold, up 33.5% on a year ago.

Looking at some of Nielsen’s findings in more detail, there is some difference in popular tracks and albums between those who buy digital versus those who go for more traditional formats, but across the board, when it comes to where labels are positioned, the picture is more uniform, with Universal Music the biggest player in every category and split charted by Nielsen. Its market share is 35% and higher across digital and physical categories — a sign of some consolidation for the company, which a year ago was more competitive against Sony Music.

Those who are most popular in streaming, meanwhile, cannot necessarily convert that into sales. Although Harlem Shake was the most popular streamed track because of all those viral videos, it failed to make it into the top-ten for single track sales. The more lucrative in terms of making a return was Macklemore, whose number-two-streamed track Thrift Shop was also the top-selling digital song, and the fifth most-played radio song (not really a driver of revenues, I think). It was also the number-three digital album and the number-seven physical album.

Justin Timberlake was the top-selling artist in all album categories, physical and otherwise, while his Suit & Tie with Jay-Z was number-seven among digital tracks but didn’t crack the top-10 for streaming, despite all that MySpace prime positioning earlier on in the year.

The full report is embedded below.