Running a website not optimized for smartphones? Guess what, you’ve been put on notice. Google is using its influence and the power of its algorithm to finally force web publishers to fix their mobile website configuration issues, or risk getting downranked in Google Search. Directing smartphone users to 404’s? You lose. Sending smartphone users looking for specific content to some generic mobile homepage? See ya. Using Flash for your video embeds on mobile? Farewell.

Now normally, a Google SEO change is worth taking a critical eye to, to make sure that Google isn’t somehow penalizing websites unfairly or favoring its own web properties as a result, for example. But this particular change will greatly impact me, as a heavy mobile user who surfs the web constantly on smartphones so…um…well… screw you guys who didn’t get on board with this whole mobile “trend” thing, OK?

The company disclosed its plans in more detail earlier this week, noting that it will “roll out several ranking changes in the near future” that would affect sites not optimized for smartphones, while explaining “smartphone users are a significant and fast growing segment,” and Google wants them to “experience the full richness of the web.”

(Translation: people actually want to use the web on their smartphones, dummies.)

Google’s news mostly flew under the radar as most tech news sites – TechCrunch included – fawned over the reveal of iOS 7, though it could ultimately have a much greater effect on the tech world as a whole. Only some people use iPhones, but everyone* surfs the web.

And Google’s influence when it comes to the web is massive. In the U.S., the company has 66.5 percent of search market share, with the next nearest competitor Microsoft/Bing at just 17.3 percent as of this April, according to comScore. Worldwide, Google’s search footprint on both desktop and mobile is even larger, with an 83.18 percent share on the former, and an 81.02 percent share on the latter, per NetMarketShare’s numbers.

According to its new directives, which Google more casually referred to as “common mistakes,” desktop pages which redirect smartphone users to irrelevant pages on the smartphone website (often just the smartphone homepage), will be among those penalized by the ranking changes.

If you’ve at all used the web on your smartphone, then you’re all too familiar with this frustrating experience – you do a search, tap on a result for an article you want to read, then end up staring confusingly at the site’s mobile-web optimized homepage. Where is the content you wanted? Who knows!

It’s a huge waste of time and bandwidth to have to deal with pages like this when surfing on a smartphone, and Google is now going to make sure that sites like that no longer get top placement.

Google also listed a number of smartphone-only errors website owners should look out for, including desktop pages that redirect to 404’s instead of the smartphone-friendly page (or the desktop page if a smartphone page is not available), incorrect handling of the Googlebot-Mobile, and more. But the recommendation which stuck out was the one which stated that sites should not embed video that doesn’t play on smartphones.

And with this tip, Google quietly served the final death-blow to Adobe Flash, too, saying:

Many websites embed videos in a way that works well on desktops but is unplayable on smartphone devices. For example, if content requires Adobe Flash, it won’t be playable on an iPhone or on Android versions 4.1 and higher. 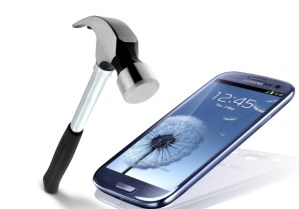 It’s a notable direction for a company which once embraced the Flash format for its Android platform, and had partnered with Adobe to bake Flash into its own web browser Chrome, even as former Apple CEO Steve Jobs told the world just what he thought of Flash, and none too kindly at that. Google finally gave up the fight for Flash on mobile in recent months, given that Adobe, too, had turned its business away from Flash and toward building HTML5-based tools and applications instead.

Flash, long since banished on iOS, unsupported on Android 4.1 and higher, and dropped by game development engines like Unity, needs to stop powering video embeds, too. At least on mobile.

How long do website owners have to make the changes Google suggests? The company doesn’t say, only hinting that they’ll come in the “near future.” (Arguably, these companies have had years to start caring about mobile, so let’s not shed any tears for them.)

Now, if Google could only do something about those ridiculous websites that push you to download their mobile app when you just want to read their content. Yes, Quora, I’m looking at you.

* Everyone meaning anyone with access to it who has also has access to a supported device. Not like literally every human being in the entire world.