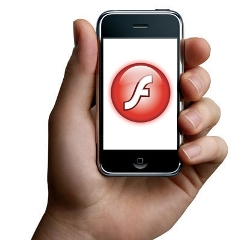 So we just got word that HTC will be the first manufacturer to bring Adobe Flash to the Android platform with the release of its new Hero / Sense device. If you needed more proof that Android is here to stay and will not sit on the sidelines in the mobile operating systems game, this is it. If you think about it, the iPhone is now the only platform with substantial weight on the market that doesn’t boast support for Flash.

With the new Flash Player 10 just around the corner and HTC officially joining the Open Screen Project, Android, Symbian OS, Windows Mobile, and Palm WebOS will be among the first platforms to support full web browsing and access to virtually all Flash-based Web content.

The HTC Hero phone will come with Flash Lite 3.1, which means it’ll be able to cope with anything written with ActionScript 2.0 and thus be very well equipped for interactive content as well as streaming online video and audio. Adobe says about 80% of all online videos are delivered in Flash today and Adobe Flash Player content reaches over 98% of Internet-enabled desktops worldwide.

See Flash in action on the HTC Hero in this non-embeddable demo video.

Now, when is Apple finally going to play ball and get serious about Flash support?