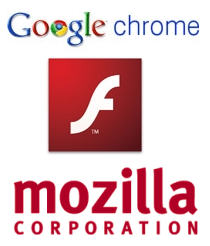 The rumors were true: Adobe and Google are tightening their partnership, seemingly both warily eying Apple in the process – and Mozilla plays a role in this story as well.

Concretely, Adobe has announced that its Flash Player will be included with future versions of Google Chrome right out the gate, so users will soon no longer be required to download and install a third-party plugin to make it work with the open source browser built on top of Chromium.

You can download the dev channel build now, and yes, you can easily disable the built-in Flash Player if you like.

In addition, Adobe says it is working with Mozilla and Google and the “broader community” to create a new API for browser plugins. This new API, which will build off Mozilla’s NPAPI, which has been designed from the start to be both operating system and browser neutral. In essence, the goal of the new API is to allow plugins to more tightly integrate with host browsers, which in turn should benefit users in terms of performance and security.

The new browser plugin API will allow add-ons to directly share more information about its current state to its developers and the makers of the host browser it was made for, and it could also allow for a more secure browsing experience as the process of unifying security models and collaboration on techniques to defend against hackers (e.g. sandboxing) will be made easier.

Indeed, Chrome’s “sandbox” has already been extended to Web pages with Flash content.

From the Chromium blog:

Improving the traditional browser plug-in model will make it possible for plug-ins to be just as fast, stable, and secure as the browser’s HTML and JavaScript engines. Over time this will enable HTML, Flash, and other plug-ins to be used together more seamlessly in rendering and scripting.

You can read the respective announcements regarding the partnership directly from Adobe‘s Flash Player team and on the Chromium blog.

I inquired about plans to integrate Flash Player with Google Chrome OS too, but was unsurprisingly told that there are no announcements to be made right now. Adobe did say Google is a close partner in the Open Screen Project, which I translate to “yeah, probably”.