If you remember from a teaser video posted a few days ago, today is a big day. Verizon and Motorola have finally announced the much-anticipated Droid RAZR, the next LTE beast to grace big red’s shelves. Here at the launch event in New York City, we’re hearing four words over and over again: faster, thinner, smarter, and stronger. And that’s exactly how we’d describe the new Droid RAZR.

The latest in Motorola’s line of Android smartphones takes heavily from its Droid brethren in terms of design, looking a lot like the Droid X/X2. It has that same “hump” along the upper back edge, likely making room for the camera and other goodies, but has dropped some weight with an even thinner waist line than its Bionic cousin. It’s also stronger, as promised in that teaser video, with a Kevlar fiber casing which, Motorola promises, will “withstand the back pocket test.”

Ready for specs? Of course you are.

The Droid RAZR touts a solid 4.3-inch qHD Super AMOLED 960×540 display, a 1.2GHz dual-core processor, Android 2.3 Gingerbread, 1GB of RAM, and of course, support for Verizon’s 4G LTE network. In fact, Verizon is claiming that this is its thinnest LTE-capable device to date, with a 7.1mm waist line.

That Kevlar fiber casing isn’t the only “rugged” quality on this phone — it also comes with Motorola’s new Splash Guard technology and a stainless steel core.

The new flagship also boasts an 8-megapixel rear-facing camera with dual-LED flash and autofocus (capable of video capture in 1080p). Sanjay Jha claims the phone will offer 12.5 hours of talk time and 8.9 hours of video playback. It’ll also come with Moto’s web top desktop app, if you go ahead and grab a Motorola Lap Dock. The RAZR also packs a microUSB port for charging along with HDMI out, naturally.

Motorola has included support for its MotoCast application, which streams content (whether it be pictures, movies, or music) between the PC and the smartphone. Business users will also have corporate access to email, the ability to view/edit Word documents, Citrix Receiver for remote access to desktop, along with added password enforcement.

Another awesome software feature would be the ability to sync your new MotoACTV watch with the Droid RAZR. In other words, you’ll be able to check text messages and see phone calls while you’re out jogging or hitting the gym.

Pre-orders will start on October 27, and in-store/online availability begins in “November”. The Droid RAZR will cost $299 on-contract. 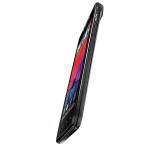 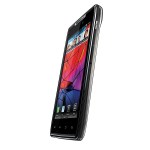