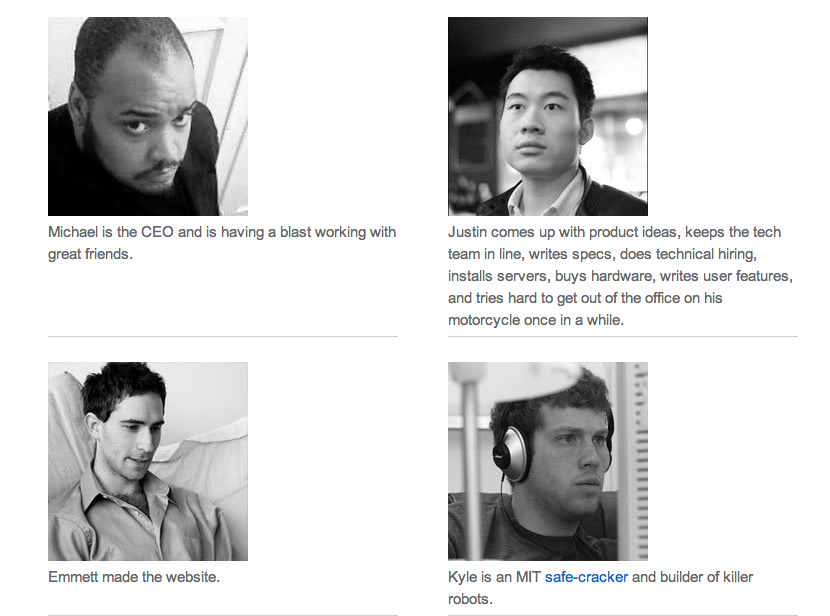 While the historical accuracy of Facebook tell-all The Social Network was questionable, the movie did tremendously well at the box office. And at the Golden Globe Awards and the Oscars. Now Hollywood producers are looking for the next big story around a tech company. Next up—Justin.TV.

LA-based production company Riche Productions has bought the rights to the story behind the development and founding of live video streaming startup Justin.TV. For background, the startup was founded by Justin Kan, Michael Seibel, Kyle Vogt and Emmett Shear, who were all buddies from college (Vogt went to MIT, the others graduated from Yale).

Prior to starting Justin.TV Kan and Shear founded an online calendar program Kiko, and even got funding from Y Combinator. Unfortunately the product failed and the pair sold the business on eBay for around $250,000.

Justin.TV got its start back in 2007 as Kan livecasted his life with a camera hooked up to a backpack that was loaded with batteries and modems, letting thousands of viewers watch his every move. It was basically the beginning of the live stream era. Even the Today Show took notice of Kan’s stunt .

Flash forwards four years, the Y Combinator-backed company has become one of the most popular live streaming platforms on the web. And Justin.TV has spawned a few businesses, including an Instagram for video, Socialcam, and a live-streamed gaming portal. You can watch our TC Cribs feature on Justin.TV’s office here.

So why did Riche Productions, which has produced Starsky and Hutch, Family Man, Bride Wars, and many other blockbuster movies, choose to buy the rights to the story of Justin.TV out of the thousands of other successful tech startups that have been launched by college kids? Peter Riche tells us in an exclusive interview that compared to some of the previous movies that have profiled tech startups (i.e. The Social Network), he wanted to find a story where success in the entrepreneurial tech world has helped bring founder friendships closer (as opposed to spurring lawsuits).

It’s true—despite the complications of founding a startup, and dealing with all of the challenges that fledgling businesses face in the tech space; Kan, Seibel, Vogt and Shear all remain close friends. And all are still actively a part of the company and involved in its day-today activities and development.

Riche says he still isn’t sure what will make sense for Justin.TV in terms of the format of a piece; and his company is evaluating whether a movie or TV show make sense.

While it’s impressive that the Justin.TV guys have been able to grow their friendship despite being on the roller coaster of creating and sustaining a startup, I have to wonder whether this would make a movie that would have the same appeal as The Social Network. I’m no filmmaker or screenwriter, but drama and conflict does seem important in developing a quality, dimensional film.

As my colleague Alexia Tsotsis wrote in her initial review of The Social Network, the movie was built around heavily dramatized controversy and the exposure of the cold, calculating (and fictional) Mark Zuckerberg. Despite the fact that Aaron Sorkin’s adaptation of the story included inaccuracies and fictional story lines, the drama, ruthless characters and arrogance were all part of what made the movie so fascinating to the mainstream public.

On the other hand, considering Riche’s experience in producing comedies, a comedic movie or TV adaptation of Justin.TV’s story could be interesting.

Would you watch a TV show or movie based around the Justin.TV story?