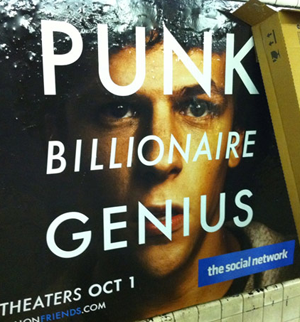 The first thing you’ll do after watching Aaron Sorkin and David Fincher’s The Social Network is visit the “History” subsection of the Wikipedia article on Facebook, seeking details on how much in the film is actually true, but primarily looking for evidence as to whether or not founder Mark Zuckerberg was that much of an asshole between 2003 and 2005.

Let me save you the trouble. He wasn’t. And perhaps Hollywood has an ulterior motive in making him out to be.

With The Social Network, Hollywood has made an artful attempt at taking the inferiority, fear and awe that it feels towards Silicon Valley and projecting it onto the cold, calculating (and fictional) Zuckerberg; “Creation myths need a devil,” spoken by Rashida Jones’ Marylin Delpy, is the most resonant line in the film.

But The Social Network’s Zuckerberg is less like the the devil and more like the world’s most Machiavellian Aspie. His detachment and arrogance is emphasized from the beginning scene, with enginerd Zuckerberg dissecting the lopsided proportion of genius IQs in China vs. the United States, bringing up his 1600 SAT score and then going on to demean his girlfriend’s intellectual prowess with “You don’t need to study, because you go to BU!”

As someone who has both read the leaked version of the script as well as seen the finished product, I can say that the emphasis on Zuckerberg’s brutal intelligence has definitely been amped up from Sorkin’s original draft by Jesse Eisenberg’s cutting performance.

A subtle but particularly telling part in the movie, pulled off elegantly by Eisenberg, comes after an attorney for the Winklevoss twins asks Zuckerberg if he is paying attention, to which Zuckerberg bluntly says no, elaborating …

I think if your clients want to stand on my shoulders and call themselves tall, they have a right to give it a try. You have part of my attention, the minimum amount needed. The rest of my attention is back at the offices of Facebook where my employees and I are doing things that no one in this room, including and especially your clients are intellectually or creatively capable of doing.

The Cold War spawned a spate of Russian movie villains, and then we had Arabic stereotypes post 9-11, and now The Social Network marks an entry point in a new era, where the Internet is the enemy and people who understand how to code and build websites have power; We are scared of those who inexplicably understand the mechanics of our social lives and are almost inhumanely driven by the formidable pain of never fitting in.

If the constant controversy surrounding Facebook privacy highlights anything it’s that anonymous engineers have become creators of anxiety, simply by virtue of knowing how to create and access the intimidating tools that have become indispensable to those that don’t know their https:// from their WGETS.

Even Sorkin himself told New York Magazine, “I am not a fan of the Internet.” As the perhaps the smartest most awkward guy in the entire world, Mark Zuckerberg is the perfect scapegoat for the whole damn thing, being someone who stole Hollywood’s cultural influence and built a half a billion strong distribution network it could only dream of, delivering a brutal blow to its business model as a side note.

And with The Social Network, Hollywood now strikes back, by targeting its best and brightest talents (Fincher, Sorkin, Eisenberg, Jones, and a too brilliant to get into right now Justin Timberlake) towards the portrayal and evisceration of Mark Zuckerberg, nerd as villain. In an impressively meta sense, this movie recaptures the pop cultural buzz that has been co-opted by Facebook, at least for the moment.

Eisenberg’s ultimately relatable Zuckerberg is the apotheosis of a laundry list of fake evil nerd archetypes: Syndrome from The Incredibles, Jeremy Piven in Old School, Darth Vader, Plague from Hackers, The Brain, Tim Robbins in Anti-Trust, Stephen King’s Carrie, and a laundry list of real ones, Bill Gates, Steve Jobs, David Barksdale, 4Chan, and so on and so forth.

But “evil” isn’t exactly the right word to describe the symbolic Zuckerberg (too many Google associations). “You’re not an asshole Mark, you just want to be,” is the last line in the film, spoken by the sympathetic Delpy. And by now we’ve all subconsciously associated Zuckerberg with the word “creep,” thanks to the ubiquitous movie trailer.

Even “creep” doesn’t quite hit on why we can’t help but root for Zuckerberg by the end of The Social Network. Having a front row seat to Hollywood’s new media catharsis and desire for some kind of inner-nerd atonement is why we have been and are going to be obsessed with the movie for months. That and the fact that we’ve got nothing to fear but those smarter, more arrogant and more driven than ourselves.