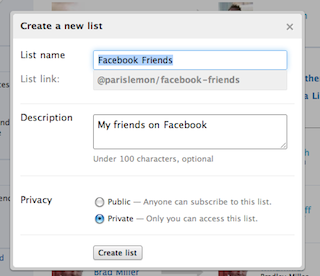 As we noted last night, a lot of people are using the Twitter app on Facebook. In fact, there are nearly 7 million users who do, making it a top 40 application on Facebook. Naturally, with that many people using it, there’s going to be some crossover between those users and the people you’re friends with on Facebook. A new feature on Twitter takes advantage of that — and throws LinkedIn into the mix as well.

Twitter is now using its application on Facebook to be able to tell which of your Facebook friends are also on Twitter. Okay, this is nothing new, but as two huge networks (Twitter with over 100 million users and Facebook with nearly 500 million) these little features can make a big difference in terms of users getting value out of the site — especially new users.

A similar feature that Twitter launched with LinkedIn a few weeks ago, has been improved to mimic more of the Facebook feature. The Find Friends area on Twitter will also now feature a LinkedIn button, which when clicked on will take a user to a page on LinkedIn showing them people they’re connected with there who are also on Twitter. Same deal: you can one-click to follow them, or create a Twitter list for LinkedIn connections.

Again, both of these are relatively small features, but they’re also smart ones for Twitter to leverage in order to maximize their social graph. And this type of thing is pure gold when it comes to onboarding new users — having friends you already know is a big reason why you’d want to stick around.

And actually, a good way to find friends common on Facebook has been the number one support request Twitter has had for some time now, Vice President of Product Jason Goldman tells us. He also notes that placing more emphasis on the app and the connection is good for Facebook because more people using the app means more data getting pushed back into the social networking juggernaut — clearly an emphasis for them these days.

That said, Twitter didn’t work with Facebook on this app, and instead built it on top of the Platform (using some of the new Social Graph elements) just like everyone else does. LinkedIn, meanwhile, built their implementation of the Twitter link-up.

Update: Well, it certainly didn’t take Facebook long to block this feature. Though it’s not clear if the block is intentional or due to rate limits. 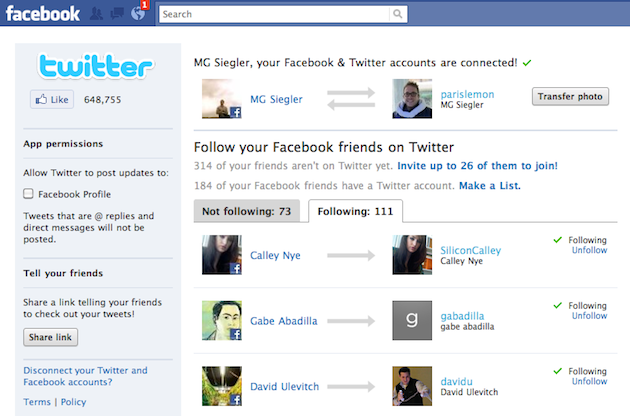 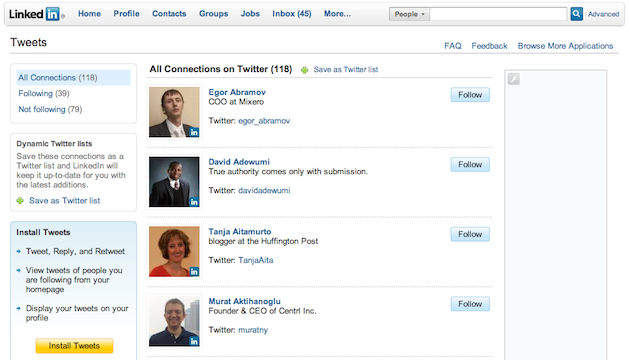