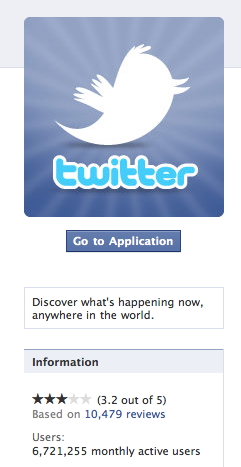 Inside Network’s AppData is a goldmine of information about third-party applications on Facebook. With it, you can see stats like: FarmVille has 63.9 million monthly active users — making it well over twice as large as the number two app on Facebook, Texas HoldEm Poker (also a Zynga game), which has 28.5 million monthly active users. But there was always something a little wonky about certain areas of AppData’s data. For example, they showed that Facebook for Android only had 67 monthly active users — yes, 67. But something happened this past week that seemed to correct the data, and it exposed one new massive Facebook app: Twitter.

As Inside Facebook (another site under InsideNetwork) noted yesterday, some change Facebook recently made appears to have corrected the stats for a number of apps. The aforementioned Facebook for Android shot up to 4.7 million MAU from its previous 67 — which was off by a factor of 70,000. The other big increase in the top 10 gainers? Twitter, which went from it’s previously reported number of just over 400,000 users, to nearly 7 million — a change of over 1,300 percent. And the app still appears to be growing pretty fast. The Twitter app’s own page on Facebook now confirms this new number.

Obviously, the app didn’t jump like that overnight, there was clearly an error before. Still, this information is interesting because it shows just how big an app made by Facebook rival Twitter is on Facebook itself. Its 6.7 million MAU makes it the 40th most popular app on Facebook, according to AppData’s numbers. That’s pretty significant.

Twitter’s app on Facebook has been the center of some controversy on the network for some time. A year ago, the app appeared to be badly broken (or exploited), and neither side appeared to be rushing to fix it. At the time, due to this underreporting, it looked like the app was relatively small (250,000 users, we reported at the time) — now it’s clear it was much, much bigger. Million of users were likely affected.

Earlier today, Facebook CEO Mark Zuckerberg shared some thoughts with Inside Facebook about Twitter. Notably, he admitted that he spent too much time thinking about the rival network over the past year and a half. But now he views it as a “very nice, simple service.” One that just happens to be one of the top apps on his platform. 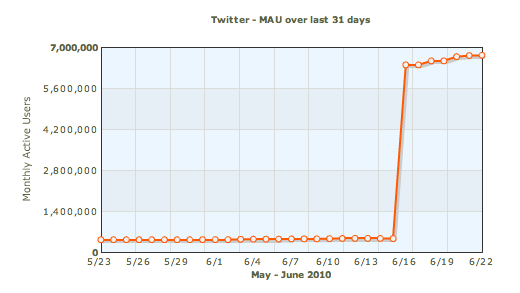