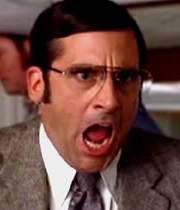 Google Buzz is now two weeks old. I decided to hold off on writing about it (beyond my overview on launch day), until I had a solid amount of time to play with it and gather my thoughts. Now I have. And now I will.

My reasoning for holding off is pretty simple: I was confused. For the first few hours I was sure it was the best thing ever. Then I was certain it was the worst thing ever. The truth, not surprisingly, is likely somewhere in the middle. Google Buzz is a service with a ton of potential, but the execution of it is so bad right now, that’s it’s at points completely unusable.

I’m not going to go into the privacy implications of it, because those have already been discussed ad-nauseum. And while plenty of them certainly seem valid, I’m just thinking about Buzz from a pure product perspective.

These entire two weeks, one problem has stood out above all others to me with Buzz: when people set the service to automatically import tweets and FriendFeed messages, Buzz collects them in bulk and spews them into your Buzz stream only once ever few hours (and sometimes once a day). If you happen to follow a person who imports either of these and is even just moderately prolific on either service, it leads to a Buzz stream that is ridiculously overrun by one contact.

Earlier today for example, one of my contacts had 30 messages in a row from FriendFeed import at the exact same time. So in order to see anything else on Buzz, I had to scroll below these 30 messages. Sure, I could mute them (and for some I did), but that takes way too long to do. And the reality is, you shouldn’t have to do that. This is just poor execution.

And it’s one thing if this happens once, but it happens multiple times a day. The same exact thing happened just hours after that one incident, but with tweets instead of FriendFeed messages — over 20 of them instantly instantly overtook my Buzz stream. It renders the service completely unusable unless you unsubscribe from that user — how’s that for a social network? One that works best the less social it is. 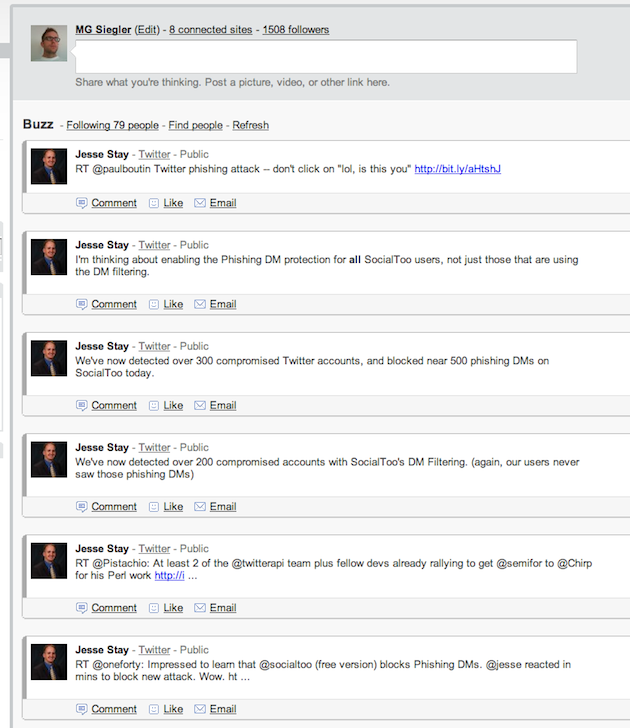 But that seems to be the case. Google has been testing the product internally for a few months, and a few Googlers have noted that in their longer experience with the site, they’ve found that it’s best to only follow a handful of people and let Buzz’s algorithms do the rest of the work to find you content you’ll be interested in. Again, it’s a social network where it’s better to be less social. Odd.

Currently, I’m following just 79 people of the over 1,500 that follow me — I’d like to follow more, but I know it will just make my Buzz experience worse (because I was and had to cut a bunch out). In fact, I could probably do with half the noise I currently see, so maybe I should cut some of those 79 as well. That really seems to be the only way to make it manageable right now.

As far as I can tell, even after two weeks of muting, liking, and commenting quite a bit, I’m not seeing the service tailor itself to my needs. Google promised this would be a big part of it, but if it’s doing it, it’s not doing it well enough — to the point where I need them to actually tell me in what way they’re doing it.

Basically, Buzz needs to become FriendFeed. From the moment I first saw it, I thought it was FriendFeed — and it kind of is, but minus all of the good filtering, social recommendation, and stacking options. For example, in FriendFeed, I can not only just mute an item, I can mute just a certain type of item just from a certain user. I’d love to do that for the aforementioned people’s tweets and FriendFeed items. Also, FriendFeed does a far superior job of bunching together similar items if you import a lot of them at once. So, for example, those 20+ tweets would have been condensed to one or two with a link to “18 more like this” which you could click to expand if you wanted to see them.

Speaking of click to expand, that’s something else Buzz needs to utilize better immediately. When I see I have new Buzz unread items, I expect them to be big entries, not comments. So when I click on the Buzz tab and see 100 new comments that I must scroll through to get to another item, I’m annoyed. The comments, while often interesting, are just meant to supplement the content they are talking about. Instead, they completely overwhelm the original message. Buzz likes to show me all the comments for any item I’ve expanded just once. By default, Buzz needs to collapse all but maybe the top and bottom comments each time, with the option to click to see the rest. You know, just like FriendFeed does. 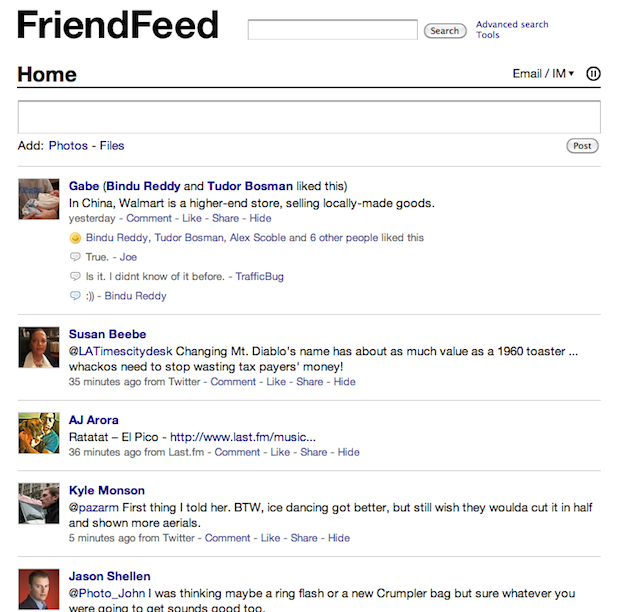 I don’t see how Buzz could so closely copy many of FriendFeed’s features but leave out the vital part: the filtering. Without it, FriendFeed would just be a bunch of noise as well. That’s the nature of importing social data from a variety of sites — it’s about taking a lot of content and presenting it in a way that’s manageable. Right now, Buzz is failing badly at that. And just imagine if they add more auto-import options (FriendFeed has dozens) — it will be totally out of control.

Frankly, I think Buzz should completely disable the auto-importing of tweets, FriendFeed items, and anything else they cannot pull in in realtime until they are able to. That’s another key area Buzz misses the boat on. FriendFeed works with Twitter because it is real-time importing tweets (and when that was broken, I quit using it). When Buzz imports tweets in bunches (or even just late), they’re pretty much useless across-the-board. They’re just noise.

And that’s what Google Buzz is right now, noise. If that’s what they were going for with the name, it worked.

But wait, the good:

Okay, now that I’ve slammed Buzz for what I see as fundamental flaws that make it unusable for most of the time in its current state. I’ll talk about what I actually do like about it — and make no mistake, there are things, otherwise I wouldn’t care about the poor execution.

Hands down, the best thing Buzz has going for it is the usage. It’s huge. Because they crammed it into Gmail, Buzz has likely already been exposed to way more users than FriendFeed ever was. The big knock against FriendFeed was always that it was the coolest service no one was using. Google Buzz can be the FriendFeed that everyone is using.

A number of items from popular users are regularly getting over 100 comments, and hundreds of “likes.” Because I’m always in Gmail, I find myself checking it quite often, even despite my aforementioned problems. Further, while some people are annoyed with Buzz messages showing up in their inbox, I find the fact that you can respond to them right from there very, very useful. The fact that you can reply to buzzes over IM is also very interesting. I still believe Google is onto something very smart with this Buzz integration within Gmail (again, it just needs to make Buzz itself better).

Buzz also does a great job of making it quick and easy to share. The box at the top of the service works well, and I particularly like that when you paste a link in, you can easily select which pictures from the site to include in the buzz. The idea of private buzzing at first seemed silly to me because you have to create a group, until I realized that if I wanted to message just one person, I could use IM or even email within Gmail as well. While I’m not yet using it, it does seem like private group buzzing could be useful.

But probably my favorite part of Buzz is the mobile version. The web app is very well made, and handles elements like location well (and makes much more sense right now than Google’s other location product, Latitude). On Android phones, Buzz is even better when you use it on the Google Maps app. It’s also very cool to see on a map where other buzzes are coming from.

Okay, so there was more bad:

Yes, Google Buzz needs a lot of work in my opinion. To be honest, I think they should just finish the job and more completely emulate everything about FriendFeed. FriendFeed was a great service, but once Facebook acquired the team, it became more of a ghost town then some already thought it was. But there still is a need for this type of service in my opinion, and I’m positive that Google Buzz can be it. (That is, unless Facebook, with their secret messaging project, beats them to it.)

While Google will never admit it, it seems pretty clear the product was shoved out the door prematurely. The mad rush to make changes and the blog posts with tips on how to use it prove that. It definitely should have launched in Gmail Labs, where these kinks could be ironed out amongst a more understanding early-adopter crowd. Instead, Google clearly wanted to go from zero to social in four seconds flat. Unfortunately, they forgot to install seat belts. Or, at the very least, barf bags.

Now Google runs the risk of having users who have already soured on Buzz because it was shoved in their face as a good but completely unpolished idea. Because of that, they’ll have double the work to do if they hope to convince those same users to try it again when it is fully ready to go. That is, if it is ever fully ready to go. They’re close yet so far from turning that annoying buzz into music to my ears.