Just two days in and Google is already sharing some Google Buzz stats and improvements. Notably, the company says that there are already “tens of million of people” checking out Buzz, and that 9 million posts and comments have been created in these first two days. They’re also seeing over 200 posts per minute from mobile phones. But amid the huge usage, Google is getting a lot of criticism for the way Buzz is currently implemented. The good news is that they appear to be listening and quickly responding.

Later today, Google says that they will create a more obvious way to hide your follower count. This has been an issue as it potentially exposes who you email and/or chat with the most. Also new is the immediate ability to block anyone who starts following you. Finally, Google will make it easier to see what people will show up on your “following you” public page. This was (and still is) tricky because only users with public profiles show up there, but it wasn’t obvious who that was.

It’s good to see Google reacting so quickly to some of the feedback they’re getting. That said, there remains a lot of work to be done with Buzz. The main problem I have with it is that it’s entirely too noisy and there is no good way to turn that down without unfollowing people. Basically, you have to take the “social” out of the social network for it to be most useful. It seems that there are simply some UI/UX tweaks they could do to correct this.

There’s another another potential security issue with Buzz that we’ve been looking into and will be posting on soon. These updates apparently do not correct that. Stay tuned.

For now, be sure to follow us on Buzz. 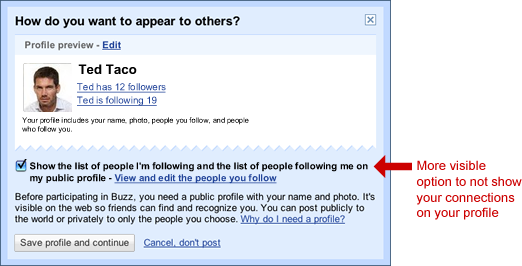