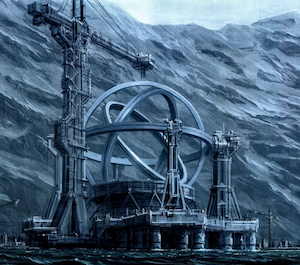 In the movie Contact, when revealing to main character Ellie Arroway (Jodie Foster) that there is actually a second space travel machine that was being built at the same time as the first one, but in secret, S.R. Hadden (John Hurt) says, “why build one when you can have two at twice the price?” Apple, it seems, may have the same line of thinking.

By now, we’ve all seen the iPad and know just about everything about it that we possibly can. But did you know that the secretive company may actually be hard at work on a second device already? Now, before I say anything else, take this information with a grain of salt. While it originated from a good source, it was a second-hand source. Meanwhile, I’ve corroborated some the main details with another source, but not some of the smaller ones. That said, from what I’m hearing, Apple is pretty far along on work on second tablet device. A bigger one. And this one may be much more like a Mac than an iPhone.

Before the iPad was revealed last week, rumors circulated for a long time that Apple might be working on two different sizes for the screen of the device. Some had the device as small as 7″, others were saying it would go up to 10.6″. (The actual size of the iPad is 9.7″.) But the information we’re hearing is that Apple is thinking much larger for another version of the product, maybe all the way up to the 15.4″ size that it currently uses for one version of the MacBook Pro. If you think that would be way too big for an iPad, we’re also hearing that this other tablet would be quite a bit different from the one revealed last week. Namely, it could run a version of OS X much closer to the traditional version that runs on Macs.

If there is any truth to that, we could learn something as soon as Apple’s WWDC event this year, which will likely take place in June (just as it does every year). Apple typically uses the event to show off its new iPhone hardware, but it is first and foremost an event for Mac platform developers, and the past two years have seen OS X as a major component. This included two years ago when Snow Leopard (OS X 10.6) made a surprise appearance and developers got a very early peek. There is already talk that WWDC 2010 could bring a similar peek at OS X 10.7. If there are some significant multi-touch components to OS X 10.7, you can expect the rumors to start flying about this new device that I’m talking about (or possibly touchscreen iMacs).

As usual, you should also note that Apple likely has a ton of projects in various stages that never see the light of day. It seems certain that at points they were playing with different sized screens for what became the iPad. But one of our sources here puts this new tablet as being released within the next year.

While everyone is still debating the uses of the iPad, a larger tablet would probably have a completely different set of uses. For example, it would likely be meant to be more of a straightforward laptop (or desktop) replacement. As such, it would almost undoubtedly come with some sort of external keyboard/stand just as the iPad offers as an accessory, but it would probably be a more integral part of using the device. When undocked, maybe you could use the thing just as you would an iPad (which is to say, holding it or placing it in your lap and using your fingers to manipulate its screen). And maybe while docked, you would even use a bluetooth mouse or touchpad device attached to the keyboard to interact with it. 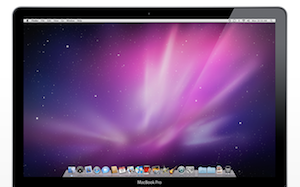 Based on various patent filing and the general trend of multi-touch enabled devices (Magic Mouse, MacBook trackpads, etc) that Apple has been releasing, it seems that Apple is definitely trending in the direction of touch computing as the future of computing. A larger tablet device could serve as a nice transition device between the traditional laptop and this new type of computing. And just as the iPhone has prepared many of us to naturally use the iPad, the iPad may do the same for this new tablet.

And while a larger screen tablet would undoubtedly cost more than the iPad, Apple would have a lot of room to price it if it really was meant to be a laptop-replacement. If that’s the case, anything north of $1,000 wouldn’t seem unreasonable, unlike it would have for the iPad.

That said, for that type of price, people are going to expect a machine that is as powerful as a laptop. We’re also hearing that Apple would likely use an Intel chip (just as it uses in traditional Macs) in such a device rather than its new custom-made A4 chip. The problem with that would be power consumption. A larger screen plus a power-hungry chip would likely lead to a battery life well below the stated 10-hour limit for the iPad. Still, if they could bring something like that in with around around 5+ hours of battery, plenty of people would be happy. And Apple has made a lot of advancements in the past couple of years with getting battery life on its laptops well above industry averages.

In terms of weight, the iPad is 1.5 pounds, while the MacBook Air is 3 pounds (with a 13.3″ screen). If Apple could remove all the unnecessary parts of the MacBook Air (like the keyboard and trackpad), it could probably keep a device pretty close to the 2-3 pound weight even with a larger screen. But given such a large screen, it would almost undoubtedly have to come with some kind of case to put it in so as not to damage the screen when in transit.

In terms of what OS X applications could or would support multi-touch integration, that’s hard to say. Safari is an easy and obvious one, but others would have to be completely reworked for this. But as we saw during the iPad keynote, Apple didn’t need too long to do that with its iWork suite of apps. Third-party developers would likely get a good set of tools from Apple to update their apps as well. Again, take this all with a grain of sale, but look for clues in OS X 10.7.