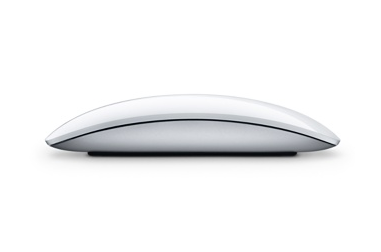 After much trial and tribulation, I finally obtained Apple’s new Magic Mouse last week. Following its release, the $70 device was so popular that practically every store in the Bay Area was sold out of them for much of last week even though most were getting new shipments every morning. Supplies remain tight online where Apple is showing a 5 to 7 day waiting period and Amazon is showing a 2 to 5 week one. So is it worth it?

The short answer is yes. This is hands-down the best mouse Apple has ever made. It’s not even close. That said, it could be even better, and hopefully down the road, with a software update, it will be.

Despite more or less starting the mouse trend, the past decade has seen some truly awful mice from Apple. Fans of the original iMac will remember the hockey-puck variety which was great if you had hooves for hands. Even worse that was for whatever reason Apple refused to add a second button to its mice, even though every other manufacturer was and most of those were clearly better products (this also makes Apple’s recent decision to add more buttons to its new remote a bit odd).

Apple finally relented, sort of, with its Mighty Mouse. Though it technically didn’t have two buttons, it did allow users to click on the right (or left) side of the mouse to simulate a second button. Too bad that mouse was one of the worst ever made. The scroll wheel on the thing was basically useless after a few months (and in some cases weeks) of use. It would attract so much grime that it had to be cleaned almost on a daily basis. The device also had side buttons that were so hard to click that they were basically pointless, and the Bluetooth version offered more ways to fail as it offered bad performance. 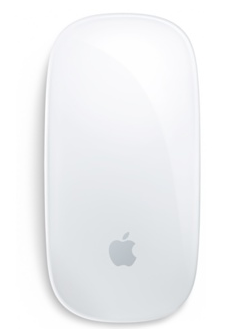 With the new Magic Mouse, Apple finally has taken a step in the right direction. The company has managed to make an elegant looking mouse (the entire top is just one smooth surface) that is also functional. Like the Mighty Mouse, despite having just one main clickable surface, you can still both right and left click, and it works well. Likewise, unlike the Bluetooth version of the Mighty Mouse, the Magic Mouse (which only comes in Bluetooth) seems very stable and responsive (though there are varying reports on this for certain types of machines).

Depending on your hand size, some people may not like the height of the Magic Mouse (it’s very low to the surface), but I find it to be quite nice, and better overall than the feel of the Mighty Mouse.

But the big selling point is its touch surface.

This is such a wonderful feature that you have to imagine it will soon find its way into most mice from various companies (Microsoft is already working on a bunch). With it, you no longer have to worry about mucking up a scroll ball, because the entire surface of the mouse is a scroll wheel of sorts if you simply move a finger up or down. It’s rather amazing how well the accelerated scrolling works. It’s better than most track balls.

The surface is also multi-touch. This means that if you swipe left or right with two fingers, you can go forwards or backwards on web pages you’re looking at. I’m finding that despite what Forbes said about it a couple weeks ago, it’s a great feature.

As great as the Magic Mouse is, it has one absolutely perplexing problem: Why on Earth are they limiting the multi-touch functionality? First of all, there is absolutely one thing Mighty Mouse users will miss with the Magic Mouse: When you clicked on the scroll ball, it would allow you to do an action like Expose. With Magic Mouse, you can’t do that.

Obviously, there is no ball to click on now, but I cannot figure out why Apple wouldn’t utilize something like a two-finger click (possible with multi-touch) to do this. And why not have functionality for a three finger click too? And why not a three finger swipe? It’d be hard to fit perhaps, but why not four-finger too? 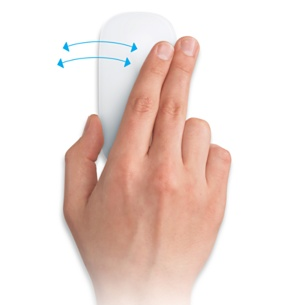 The possibilities are endless for what this mouse could do thanks to multi-touch, yet Apple is doing basically nothing with it. How about pinch-to-zoom? Nope.

I suspect we may see Apple remedy this will a software update eventually. After all, it has a history of doing that. The multi-touch trackpads on Apple’s MacBooks started out similarly crippled and have since added functionality. If you’re using a MacBook, the trackpad remains a much better input method than the Magic Mouse, simply because of the different multi-touch gestures.

There are a lot of other good mice out there (Logitech and Microsoft both seem to make good ones), and with the Magic Mouse, Apple has finally melded its desire for style with a mouse that offers a nice user experience. But it could be much better, and soon I hope it will be. Apple needs to keep its touch agenda moving forward.