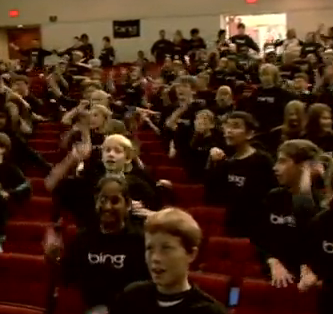 Maybe you’ll recall when I ripped apart the Bing jingle winner back in August. It was bad — real bad. But its creator, Jonathan Mann is a talented guy, and even made a jingle ripping me, which was both better than the Bing one, and funny. Sadly, Microsoft now controls his Bing jingle and is subjecting little children to it.

As you can see in the video below, Microsoft has forced a bunch of middle schoolers in Pennsylvania to learn and perform Mann’s Bing song. The horror. It’s hard to watch this without immediately thinking about parents who accept money to allow their child to be sponsored. Is this the future of branding?

Mann actually sent us the video along with the following note:

I literally cried a little bit when I saw this video. On the one hand I’m happy I was able to provide some kids with an excuse not to do school work for a few hours. On the other hand, not sure how I feel about these kids being indoctrinated into the cult of, well, whatever. It’s kinda creepy. But on the other-other hand, the kids do look damn happy. So…oh well?

It is kind of creepy. Actually, it’s terrifying. Hopefully these kids at least got free copies of some Microsoft product that they won’t be able to use on their Apple computers.