It’s public knowledge now that one of the first things Elon Musk is concentrating on after taking over Twitter is revamping the Twitter Blue program. While a lot of attention has centered around a potential verification feature being included in the paid program, the company is also removing some of the existing features like publisher partnerships, according to an email received by one of the partners.

9to5Mac, which was one of the partners in the program, confirmed to TechCrunch it was sent an email that went out to all publishers on October 31 notifying them that the Twitter Blue partnership was ending. The program allowed paid users to see ad-free articles on participating publications, and the social network would pay publishers an equivalent amount of ad revenue earned from one view. It had more than 350 publishers on board, including the likes of The Washington Post, LA Times, Reuters and The Atlantic.

“In the coming weeks, we’ll be launching an update to Twitter Blue. In the course of this work, we have made the decision to discontinue Ad-free Articles, effective as of the close of business today, October 31, 2022. This hard decision will allow us to focus our resources on adding additional value for our members. Expect to hear more from us soon,” the email read.

“Starting tomorrow, we will stop displaying the “Twitter Blue Publisher” label on any Tweets containing your articles. We will no longer be sending a Twitter Blue token when people on Twitter access articles from your properties. This will prevent the ad-free experience on your site from loading.”

Currently, some users can still see labels accompanying this article, but Twitter will gradually stop showing them. Publishers, meanwhile, were informed they could remove any Twitter Blue code from their website and were told they would only be able to access the Twitter Blue Publisher portal through the end of November. All payouts will continue on the regular schedule until the program, which the email described as a “test,” is shut down. 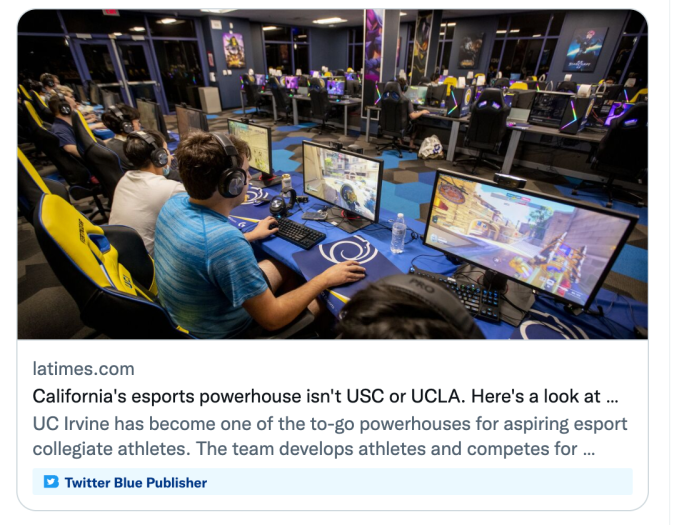 The feature’s closure is not only abrupt, it also squanders Twitter’s investment in the ad-free reading experience. The company acquired the news reading service Scroll in May 2021, with the goal of making it a part of its own subscription offering. It later shut down Scroll in the fall of last year as it moved the service’s feature set into Twitter Blue.

The service itself may not have been profitable, as it would redirect a portion of subscription revenue to support the publishers that readers engaged with. This could cut into Twitter’s bottom line for a subscription that, in and of itself, wasn’t doing very well. According to new data from app intelligence provider Sensor Tower, Twitter’s app had only generated $6.4 million in consumer spending to date, with Blue as the top in-app purchase. That’s not a lot considering the subscription has been available since last year and Twitter has some 238 million monetizable daily active users.

Twitter Blue is currently available in the U.S., Canada, Australia and New Zealand. In addition to ad-free news, it has offered features like a button to edit tweets within a 30-minute time frame, a bookmarks folder, custom icons and navigation, and early access to experimental features.

Reports have suggested that Musk could price the new Twitter Blue at $20 per month — but in a reply to writer Stephen King, he suggested $8 per month. It’s clear there’s no decision yet on pricing.

According to CNBC, the Tesla and SpaceX exec has set very aggressive deadlines for the Twitter Blue revamp, with some employees having to work in 12-hour shifts.