An edit button has been the most requested feature to date on Twitter, and as of today, the company is finally giving users what they’ve been asking for.

Amidst a high-profile court case over its future ownership and a number of other controversies to boot, Twitter today confirmed a new feature to edit tweets. It’s starting out with internal testing, and the plan is to make Edit Tweet functionality available to subscribers of its paid tier, Twitter Blue, later this month.

In July, people criticized the company for increasing the subscription prices of Twitter Blue; perhaps the introduction of the Edit Tweet feature will offset that hike.

For those who will get the Edit Tweet feature, the rules are basic: Eligible users will get a 30-minute window to mend their tweets and the edited tweet will show up with a label showing a timestamp of modification. People reading the tweet can tap the label to view the editing history of the tweet. 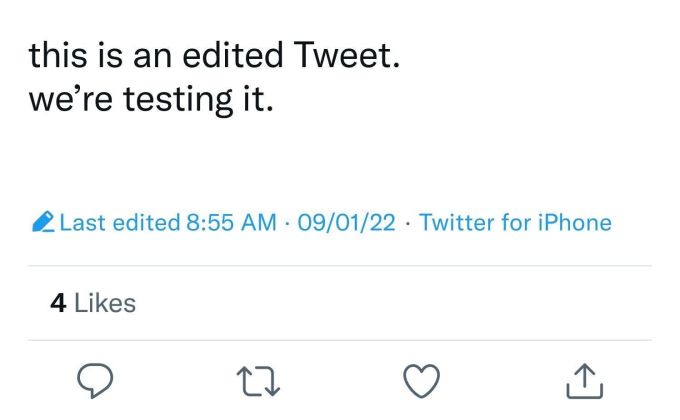 For those who have been following the progress of Twitter and the editing function, you’ll notice that this implementation is largely in line with app sleuths’ findings about the feature after Twitter officially announced it was working on an edit button in April. Last month, app researchers pointed out how edited tweets might behave when embedded on different sites. The firm said that embedded tweets won’t change on site even if they’re edited later to preserve the story’s original essence.

We have asked Twitter to clarify, and we’ll update the story if we hear back.

Notably, the social media platform already offers an “Undo Tweet” button to Twitter Blue subscribers that gives users a 30-second window to cancel posting a tweet if they spot any error. The company said it will continue to offer this feature after it launches the Edit Tweet button.

There are some definite grey areas that arise as a result of the rollout of an edit button.

For starters, it could potentially play a role in how Twitter gets appropriated by the media. These days, tweets — whether from companies, politicians, artists, businesspeople or just ordinary people — are often used as the basis of news stories. Making those tweets editable will put the onus on publishers to track a tweet to check if its content has been changed. (Of course, it’s just one more thing for publishers to track, since stories often evolve; and if a tweet gets embedded and then deleted that could also change a story.)

There is also a question mark over how regulators will look at an edited tweet when it comes to content that might be in violation of a country’s laws.

The company said in the blog post that the purpose of the Edit Tweet feature is to “give people a short period of time to fix things like typos, add missed tags, and more.” However, there’s no restriction to what you can modify in a tweet and what consequences those edits might have.

“With Edit Tweet, we’re hoping to make Tweeting easier and more approachable, giving people more choice and control in how they express themselves and how they contribute to the many conversations happening on Twitter,” the company said in a blog post.

Twitter added that it’s introducing this feature to the smaller group of paid users to gather more feedback, including how people could misuse it — so that it can tune the edit button’s functionality accordingly.

“Since this is our most requested feature to date, we want to make sure we get it right,” it said.

That could imply that Twitter might make it more widely available over time, rather than a feature restricted only to those who are willing to pay for the privilege, only in those countries where Twitter has rolled out its paid tier.

The company has see-sawed on an edit function a number of times over the years.

Jack Dorsey, the co-founder who was the CEO until he stepped down in November 2021, said Twitter considered but ultimately wouldn’t build the feature, a sentiment echoed by his executives. All that apparently changed in quick time this year under new management and public prods from Musk as he bought up shares in Twitter to make his acquisition move.

The news could give Twitter a boost of goodwill at a critical moment.

The company is in the middle of a very high-profile tussle with Elon Musk, whose offer earlier this year to acquire the company for $44 million was accepted by Twitter, only for Musk to turn around and try to wiggle out of the deal, pleading that Twitter did not disclose full data about its users (and specifically bots). That’s turned into a complex legal drama, potentially fueled by other developments, such as allegations from Twitter’s former head of security that Twitter mismanages security and user data, which became public just last week.

On top of that, it looks like there have been some questionable product developments. A report in The Verge revealed that Twitter was working on an OnlyFans competitor but stopped only after an internal report pointed out the platform’s inability to child sexual abuse material (CSAM) and non-consensual nudity at scale. Throughout all this, multiple top-level executives have left the company, and its stock price has been on a (mostly downhill) rollercoaster in the last year.