Hell hath frozen over, apparently. Today, Apple addressed a longtime user complaint about the iPad with news that the device will finally get its own default weather app — some 12 years after the tablet’s debut, if you can believe it. Oddly, Apple had overlooked the addition of this key app, despite acquiring weather app maker Dark Sky in 2020 and revamping the iOS Weather app with the launch of iOS 15. The company even went so far as to roll out a Weather widget for the iPadOS home screen, but instead of launching a native app, it linked users to The Weather Channel’s website.

This was a less-than-ideal experience, as the site (weather.com), is cluttered with ads and is not the sort of clean and easy-to-navigate experience Apple users have come to expect. Apple never explained its thinking here, but the fact that it had launched a Weather widget for iPad without an accompanying app made this whole thing feel increasingly bizarre. Did the IBM-owned The Weather Channel have an undisclosed traffic deal with Apple? Did Apple really think users would rather visit a website than a native app? Was this an antitrust thing? What was going on?!

While there were plenty of quality third-party apps users could rely on for accessing weather information on the iPad, it seemed strange that a flagship Apple device like this wouldn’t have such a basic utility at this point.

But today at Apple’s Worldwide Developer Conference keynote, the company announced that, at last, the iPad would finally get its own Weather app.

“We’re also bringing Weather to the iPad, taking full advantage of the stunning display with beautiful animations like these gently moving clouds, heavy snowfall and driving rain,” noted Apple SVP of Software Engineering Craig Federighi, as he briefly showed off the new native app’s features. The app isn’t all that remarkable, largely just an iPad-optimized version of the native iPhone app. But it will be a welcome addition. 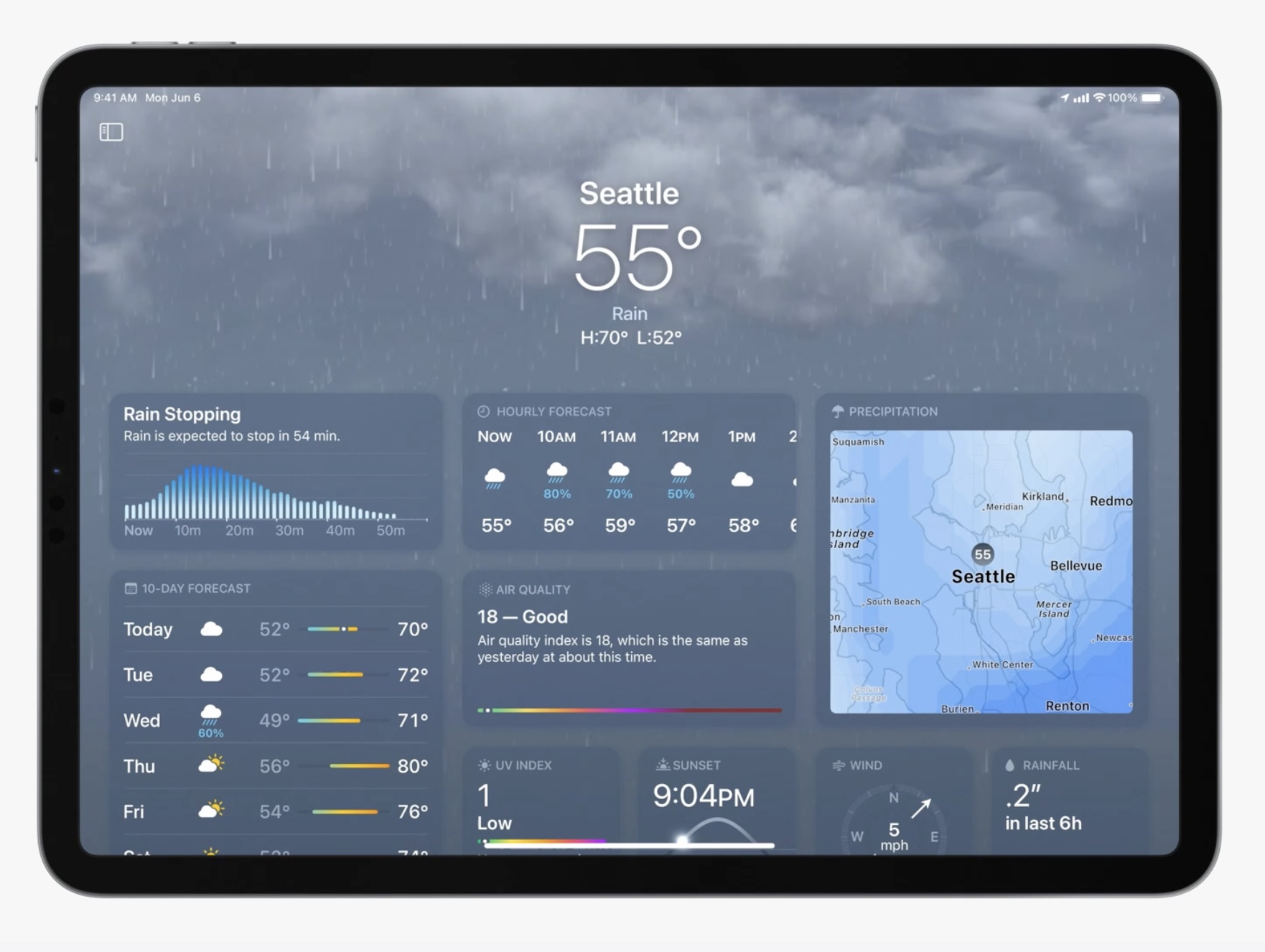 The update coincides with iOS 16’s new feature that allows users to customize their device’s lock screen with a live weather wallpaper that shows the current conditions as they change throughout the day. Similarly, the iPad app will include these same sorts of animations — clouds, rain, lightning, snow, etc. The native app will also offer tappable weather modules that will allow users to drill into areas like the forecast, temperature, precipitation, UV index, air quality and more. When tapped, a window will pop up and overlay the app’s home screen to show the detailed information, Federighi explained.

In addition, Apple followed the news of the weather app with the long-expected launch of WeatherKit. This developer toolkit makes good on Apple’s plans to allow third-party developers to build apps on top of Apple’s own weather data — an area Apple had signaled its interest in with the Dark Sky acquisition. This was an under-the-radar announcement that has larger ramifications for the app industry, as it sees Apple introducing its own weather-related, revenue-generating service.

As the company transitions developers off the Dark Sky weather service to WeatherKit, it says it will provide up to 500,000 API calls per month as part of its Apple Developer Program membership during the beta period and beyond. After that point, it will begin to charge at the following rates:

For comparison, Dark Sky’s API had offered 1,000 API calls for free, then charged $0.0001 for each subsequent call.

Apple says WeatherKit requires iOS 16, iPadOS 16, macOS 13, tvOS 16 or watchOS 9 and notes REST APIs can be used for websites and other platforms. The Swift APIs for WeatherKit will require the beta versions of the Apple OS’s and Xcode 14.

The native iPad weather app rolls out with the released of iPadOS 16.