Weather remains one of the most-used apps on mobile devices, and yet so often it’s also one of the least dynamic when it comes to updates and new features (ironic especially if you live in a country like the UK, like I do, where the weather is a near-national obsession and does really change within the course of an hour. Captive audience!). So today during WWDC it was great to see Apple finally giving its own native weather app some love with a significant update.

Possibly its biggest since long ago dropping Yahoo for Weather Channel as its key data provider?

The company has completely refreshed the interface with an animated layout that reflects what state the weather happens to be in at the moment and place you are searching, similar to what Apple displayed in its last update but significant more dynamic, with more wind, rain, sun and smog (sorry). There are now thousands of variations that Apple says more accurately represent sun position, clouds and rain. 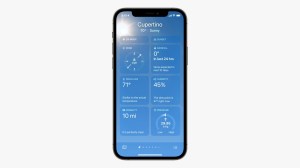 In addition to this, Apple now shows off a pretty extensive dashboard of more datapoints — taking the information way beyond basics of temperature and precipitation. Graphics now include wind, UV index and barometric pressure. Alongside this you now get full-screen weather maps, high resolution images that animate the progress of rain and clouds, air quality, and temperature — sort of like your own personal weather assistant. 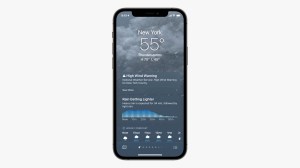 Some of this has been a long time coming but also unsurprising, and not just because of how perennially popular weather apps are.

Back in March 2020, it emerged that Apple made a key acquisition of a weather app startup, Dark Sky, easily one of the best weather apps on iOS and Android before Apple shut it down.

Again, given how surprisingly neglected weather apps tend to be, especially considering how passively popular they are, it was possibly always a low bar that was going to be bettered by someone. But Dark Sky, which began as a Kickstarter of all things, really did the effort justice.

It’s not clear why it too so long for Apple to make it rain on its weather app after that acquisition, but it’s good that it finally has.

Of course Apple’s still not magical enough to bring you guaranteed sunshine for that camping weekend you have coming up, but the update will mean that the data nerds among us might have a lot more fun figuring out what will happen next, and hopefully get a more accurate picture of the details that will help you decide whether you absolutely have to make room for wellies in the car or not.