As the battle for podcaster talent and distribution heats up among providers, Apple this morning announced the launch of several new features for its Apple Podcasts service, arriving alongside the latest software updates for iPhone, iPad and Mac. Key among these are features for managing podcast storage across devices, tools to enable annual podcast subscriptions and the newly announced Apple Podcasts Delegated Delivery system — a feature that will soon allow creators to more easily distribute their podcasts directly to Apple Podcasts from third-party hosting providers.

Apple says this latter addition will save creators time and energy as they’ll be able to authorize their hosting provider to deliver both their free and premium podcast episodes to Apple Podcasts using the provider’s own dashboard. But it also gives Apple a means of competing with services like Spotify’s Anchor, which now provides tools for creation, hosting and distribution across all major listening apps.

Starting this fall, a select number of hosting providers will support the Delegated Delivery system, including Acast, ART19, Blubrry, Buzzsprout, Libsyn, Omny Studio and RSS.com. Apple says these providers represent around 80% of listening for premium content on Apple Podcasts, and more services will be added over time.

Apple notes additional details about the new system, including educational resources for creators, will be introduced closer to the service’s launch. In the meantime, creators can visit the Hosting Providers page on Apple.com to stay tuned for further updates.

While the new distribution technology is top among today’s announcements, another new tool will be welcomed by longtime Apple Podcasts users — particularly those impacted by the app’s more recent bugs.

Because Apple Podcasts is able to download shows to listeners’ devices, the app can end up consuming a lot of device storage. On iPhones in particular, this can lead to users running out of room for other essential activities — like taking photos or installing new apps and games. This issue was then further complicated by the buggy iOS 14.5 and macOS 11.3 releases, which caused unwanted, older episodes of shows to be downloaded, eating up even more storage. 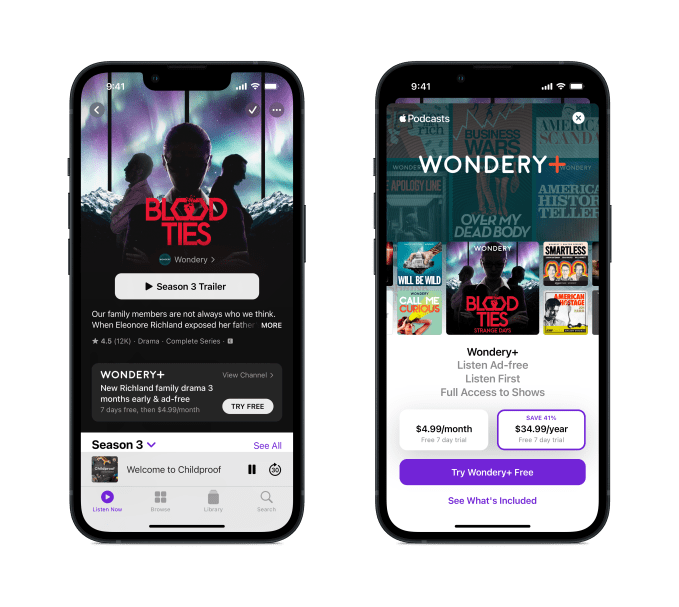 With the launch of iOS 15.5, iPadOS 15.5 and macOS 12.4, Apple is launching new tools to solve the problem of more easily removing a show’s accumulated downloads, potentially freeing up gigs of storage on users’ devices as a result.

From the Settings app on iPhone and iPad, users will be able to navigate to Podcasts, then tap on “Automatically Downloaded” to choose how many episodes of shows are downloaded and saved to the device. The menu will allow listeners to choose to download a certain number of recent episodes, like the latest three, five or 10; or users can choose to download all episodes published recently, like in the last seven, 14 or 30 days. Or they can select “All New Episodes” or none by choosing the “Off” option. The latter makes Apple Podcasts function as a streaming-only app, which works for most people who live in areas with reliable cellular connectivity or access to Wi-Fi.

What’s more is when a user selects their preference, the app will then prompt them to remove the automatically downloaded episodes on the device that now no longer meet the newly selected criteria. That means this feature actually works as a bulk clean-up tool for removing a large number of downloads from the device storage. Before, this was a tedious, manual process that could be tackled in different ways. Users could mark shows as played while having the “Remove Played Downloads” setting turned on, or they could manually remove the downloads for a show or individual episodes one by one.

These new preferences can also be customized at the show level, not just system-wide, for a more personalized experience.

This new functionality will also be integrated into the iPhone’s recommendations related to cleaning up device storage. From iPhone Storage (under Settings –> General), users will be prompted to keep only the last five episodes and delete older shows if podcast episodes take up more than 15% of their device storage.

The selected settings carry over to Mac, as well, which gives desktop users the ability to make decisions related to their Mac storage. That means this is the first time listeners can automatically delete old episodes across their devices. 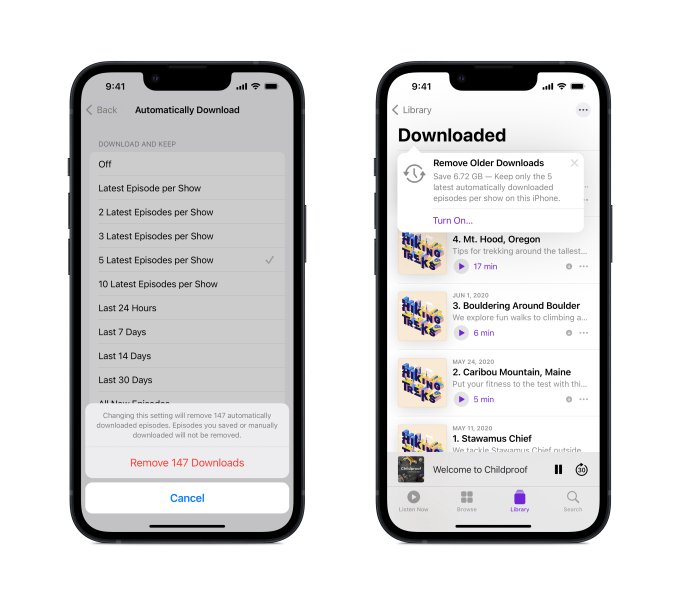 Finally, Apple says it’s introducing the option for podcast creators to present annual subscription plans for their premium podcasts alongside their monthly options. These appear when a user taps “Subscribe” or “Try Free” on a show or channel with a subscription. Of note, the annual subscription will now be selected as the default. And, when the annual cost is lower than if the listener paid monthly, the annual plan’s savings will be displayed to the user.

Creators are able to set up their annual subscriptions at price points they choose as they do their monthly subscriptions in Apple Podcasts Connect.

The subscriptions and new storage features are rolling out with iOS 15.5, iPadOS 15.5 and macOS 12.4. Delegated Delivery will arrive on supported podcast hosting providers later this fall.

Other updates to the app in iOS 15.4 include the ability to browse shows by season and filter episodes by status, which will make it easier to find the one users want to play.

The changes follow a Podcasts app update that introduced a new design but also a number of usability issues that drove users to third-party podcast apps, including to Apple Podcasts competitor Spotify, which has been heavily investing in the podcast ecosystem. Those departures could limit Apple’s ability to market podcast subscriptions to users, where Apple takes 15%-30% of subscription revenue, similar to the App Store.

Ahead of this update, Apple last month introduced three new Apple Podcasts Collections — Darkside, tbh and Popped — which focus on true crime, culture and entertainment, respectively, and are available in the U.S. and Canada. It also recently added support for uploaded MP3 files for subscriber audio in addition to WAV and FLAC, tools for getting help with launching subscriptions with Jump-Start, and new analytics around listening and followers in Apple Podcasts Connect.