After years of increased competition from Spotify, Apple today announced its own expansion into podcast subscriptions. At the company’s spring event this afternoon, Apple unveiled its plans for a podcasts subscription service that would allow listeners to unlock “additional benefits,” like ad-free listening, early access to episodes and the ability to support favorite creators. The service will be available as part of Apple’s newly updated Podcasts app where free podcasts are also found.

The announcement of the new service, Apple Podcasts Subscriptions, follows shortly after an industry report suggested that Spotify’s podcast listeners would top Apple’s for the first time in 2021.

Apple CEO Tim Cook briefly introduced the subscription at the launch of today’s event, noting that this was “the biggest change to Apple Podcasts since its debut.”

Cook also noted the Apple Podcasts app had been updated, with newly redesigned show and episode pages that make it easier to listen, follow and share podcasts. The app will also include a new “Channels” feature that lets you find shows from favorite creators and get recommendations. This area will include both free channels and paid channels, which feature benefits for paid subscribers.

The channels themselves are groups of shows curated by creators, with “unique titles, descriptions and artwork,” Apple says. 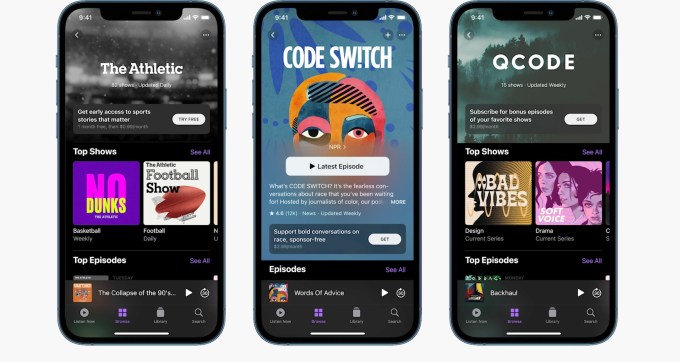 The app will also include a “Smart Play” button that helps listeners automatically start episodic shows from the latest episode and serialized shows from the beginning of each series, Apple says. Other new features let users save individual episodes for offline playback, an enhanced Search tab for quick access to Top Charts, and an updated Apple Podcasts Connect dashboard for podcasters. The dashboard allows creators to edit their shows’ metadata, schedule and manage show availability, organize shows into channels, manage multiple users and roles, and track how well their shows are doing via new performance metrics and visualization tools.

Apple said the new service will be available in May to listeners in more than 170 countries and regions.

In a press release, Apple said the first premium subscriptions would come from both “independent voices and premier studios,” including Tenderfoot TV, Pushkin Industries, Radiotopia from PRX and QCODE, as well as larger brands like NPR, the Los Angeles Times, The Athletic, Sony Music Entertainment and others.

“Fifteen years ago, Apple took podcasts mainstream, offering creators a premier, open platform to inform, entertain and inspire hundreds of millions of listeners around the world,” said Eddy Cue, Apple’s senior vice president of Internet Software and Services, in a statement. “Today, Apple Podcasts is the best place for listeners to discover and enjoy millions of great shows, and we are proud to lead the next chapter of podcasting with Apple Podcasts Subscriptions. We’re excited to introduce this powerful new platform to creators around the world, and we can’t wait to hear what they make with it.” 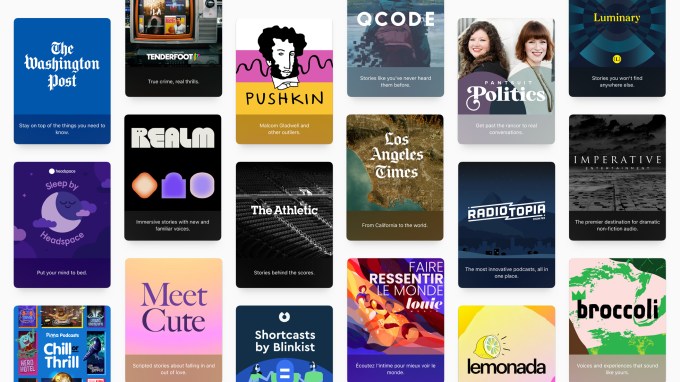 Apple’s plans for a podcast subscription service was previously scooped by The Wall Street Journal, which said the company was preparing to add a paid subscription option to its product, as well as by Vox Media’s Peter Kafka, who said he believed Apple would introduce a paywalled podcast subscription product at today’s event. There were also hints found in the iOS 14.5 beta, which showed a redesigned Podcasts app featuring an account button on the Listen Now tab. MacRumors had reported that show notifications had been relocated here and suggested that managing paid subscriptions may also be found in this new area in the future.

Spotify in February noted it had tripled the number of podcasts on its platform, year over year, to 2.2 million. It has also forged a variety of exclusive deals over the years with big names like Joe Rogan, Kim Kardashian, DC Comics, Michelle Obama and The Duke and Duchess of Sussex, among others. And it has acquired podcast startups, ad tech and studios, including hosting and ad company Megaphone, creation tools from Anchor, content producers like Gimlet, The Ringer and Parcast.

More recently, Spotify announced plans for its own podcast subscriptions via an Anchor feature and invested in live audio through its acquisition of live chat app Locker Room by Betty Labs. Spotify had said it would share subscription revenue with podcast creators, who would keep the majority of their earnings.

What podcast creators need to know: