Any book lover knows the feeling: The incredible novel you’re reading ends with a vicious cliffhanger, and all you want to do is gab with other fans about what might happen next, but none of your friends have read the book. You might find fan discussions on Reddit, Tumblr or Discord, but it can be a bit of a crapshoot.

The founder and CEO of Copper, Allison Trowbridge wanted to build a social network that revolves around books, connecting authors and fans through in-app discussions and live events. As an author herself, she also wanted to help writers find new income streams, whether that’s through ticketed virtual events, or just generating enough conversation around a book that more people buy it.

“You have Twitch for the gamers, and Etsy for the crafters, and Spotify and SoundCloud for the musicians,” Trowbridge said. “Authors have never had a platform that’s built around their needs, and helping them reach an audience and do it in a way that’s authentic and engaging and can scale, but also creates depth in the relationships.”

Authors on Copper can host FaceTime-like discussions about their work, which they will be able to sell tickets for in a later version of the app. They can also engage in text-based forum discussions with fans, helping deepen their relationship with their readers. The app will always have a free version for both authors and fans, but later this year, Trowbridge wants to create a premium version of the app, which would offer paying users additional features.

Copper is part of a growing crop of companies that want to help connect authors with readers. Bookshop.org, Libro.fm and Folio have offered consumers an alternative to Amazon, while apps like The StoryGraph are trying to dethrone the dormant Goodreads. 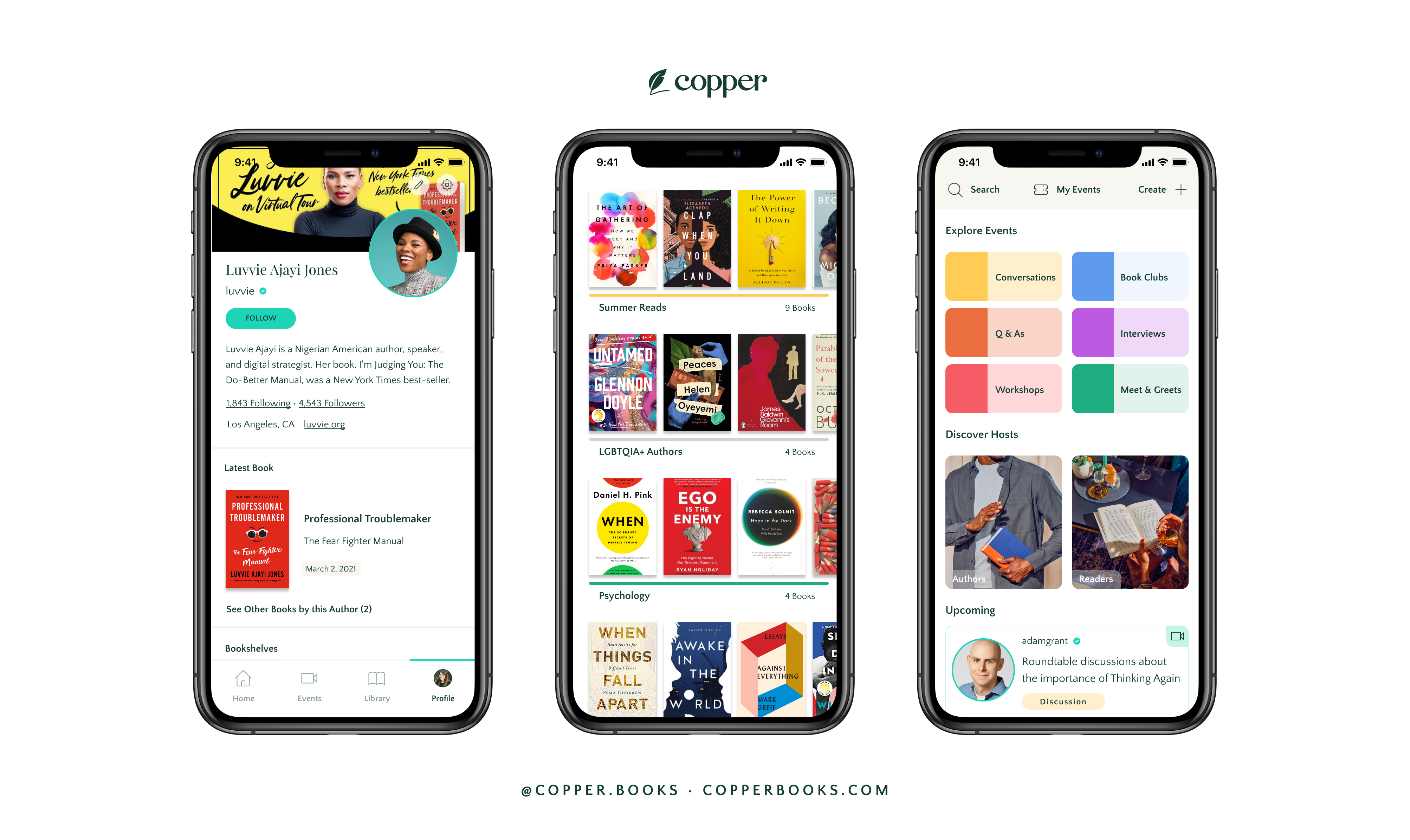 Though book sales are increasing each year, Trowbridge thinks there hasn’t been meaningful change in the way authors can grow their audience, sell more books and make writing a more sustainable career (if you’re lucky, your self-published book might go viral on TikTok, earn you a book deal and become a New York Times bestseller, but we can’t all be Olivie Blake).

Goodreads, for instance, remains a go-to platform for discovery, but its interface hasn’t visibly changed since Amazon bought it in 2013. Plus, Trowbridge noted, emerging authors are told to never look at the Goodreads reviews of their books (“You’ll never want to write another book again,” she jokes). It might be a useful platform for readers looking for book recommendations, but it’s not the most author-friendly website. Copper hopes to make a product that’s fun and useful for both readers and writers.

“For authors, you’re not just a writer. You’re kind of a micro-entrepreneur,” Trowbridge told TechCrunch. That statement might repulse some literary types, but promotion is a means to an end — unless if you’re an established superstar, you probably don’t have much help marketing the book you worked so hard on.”Once the book is written, you’re really doing a product launch, and you’re spending six months thinking about how to launch this product and sell it to an engaged audience that’s going to to buy it and read it.”

So far, Copper has secured $2.5 million in pre-seed funding led by Wave Capital, and including key individual investors like former Time Inc. executive Fran Hauser. Bestselling author and Wharton professor Adam Grant has also been a crucial advisor to the project.

As Copper launches out of private beta on iOS, the app has a waitlist of 6,000 potential users, half of whom are published authors. Trowbridge says Copper has had “several hundred” of these authors onboard during private beta.

A primary selling point of Copper is the promise of community, but community can’t exist without enough users. So, Copper will face a moment of truth in the coming months as it charges full-speed ahead in the age-old pursuit of user acquisition.

“Ultimately, we want to build the Instagram for book lovers,” Trowbridge said.